Laflin native’s death will remain a mystery
A young Luzerne County native lay dead on the floor of her cop boyfriend’s apartment in South Carolina from a gunshot blast that tore through her heart.
The Citizens Voice
BY ROBERT KALINOWSKI
09/25/2006
EXCERPTS:
...South Carolina Attorney General Henry McMaster has closed the case without making a ruling either way. He says it would be “impossible” to know what happened the night the Laflin Borough native died, largely due to a flawed investigation from the very start when police were tasked with investigating the house of one of their own... That’s what upsets Wrazen family attorney, Tim Kulp, the most. “It seems to be somewhat illogical to say we’re closing the case and to say at the same time there are so many unanswered questions,” Kulp said recently... Investigators were quick to label Wrazen’s death a suicide. Unsatisfied, Wrazen’s family then hired Kulp and private investigators to dig deeper into the case. The county coroner refused to go along with police findings and held a rare coroner’s inquest to determine how Wrazen died. A jury ruled Wrazen was murdered... “We concluded, number one, there is absolutely no evidence whatsoever of suicide, none,” Kulp said. “She was shot through the heart in her finance’s apartment with his gun and found by him. That’s an excellent starting point for an investigation”...

The article says the family is distraught but remains hopeful.

So do I.
And I'm lifting it in prayer - that God take this case into His full loving care and horizonless power.

To anyone who is a believer, and who may read this, please join me - not in a prayer against anyone - but simply for truth revealed.
All in love.


"Again I say to you,
that if two of you agree on earth
about anything that they may ask,
it shall be done for them
by My Father
who is in heaven."
To see the previous entry on Molly & Justin go here
[police officer involved domestic violence law enforcement fatality fatalities murder south carolina unsolved or unresolved]
on 9/28/2006 7 comments

Maybe it did. Laura shot and killed Robert and herself. That part seems clear enough. But something doesn't sit right.

This week's reporters - all with access to the made-public police report - fail to mention some things from it. They also intentionally omit information from earlier articles right after the shooting.

First, the only person saying that there was an abortion is Robert Peat's friend Michael Roth, a reserve police officer. Roth says PEAT TOLD HIM a couple of weeks ago - but he doesn't remember the date. According to Roth, PEAT TOLD HIM that although he was religious that he and Laura thought the abortion was best. PEAT TOLD HIM that Laura had gotten progressively worse since the abortion happened. The police report doesn't mention any confirmation... just that ROTH SAID PEAT SAID. The reporters ask no questions. Autopsy? Corroboration of any kind?

And according to Roth, PEAT TOLD HIM it was Laura that kicked in the door of his house.
Roth said Peat said.

Why am a leery of Roth as a final and trusted say in double death? A couple of reasons.

While reporters leap NOW at this easy attention-grabbing abortion drama, a suspiciously oversimplified resolution to the case, what they leave OUT is that it was ROTH that was holding up the investigation for DAYS by refusing to talk to police. Roth was at the house when the shootings happened. His non-cooperation was in the paper. Public - though it is completely absent from this past weeks news that rests on his every word as fact. THE MURDER-SUICIDE HAPPENED ON AUGUST 4TH AND FIVE DAYS LATER ROTH WAS STILL REFUSING TO TALK TO POLICE! So what makes him the end-all now?

...THEY STILL DON'T KNOW WHAT CAUSED A DISPUTE... POLICE ON SATURDAY HAD NO DETAILS ABOUT THE EARLIER DISPUTE... DETECTIVES HAD NOT INTERVIEWED ROTH AS OF LATE SATURDAY AFTERNOON...
(Source: Double shooting shocks firefighter's peers, South Florida Sun-Sentinel, 8/6/2006)

...AUTHORITIES HAD FEW NEW DETAILS TO RELEASE MONDAY. THEY ARE WAITING TO HEAR FROM THE ONLY WITNESS TO THE SHOOTING, MIKE ROTH, A RESERVE PLANTATION POLICE OFFICER AND A LIEUTENANT IN THE CITY'S FIRE DEPARTMENT... DETECTIVES DO NOT KNOW WHY PEAT AND GRUNAS WERE ARGUING. "THERE WAS SOME MENTION OF A BABY, BUT WE'RE TRYING TO CONFIRM WHAT THAT MEANT"...
(Source: Motive elusive in murder-suicide involving firefighter and police officer, South Florida Sun-Sentinel, 8/8/2006)

POLICE GREW IMPATIENT TUESDAY AT NOT BEING ABLE TO REACH THE SOLE WITNESS OF A MURDER-SUICIDE INVOLVING A FIREFIGHTER AND A PLANTATION POLICE OFFICER. "WE'RE HAVING A LITTLE BIT OF DIFFICULTY IN GETTING IN TOUCH WITH MIKE ROTH," SAID DETECTIVE PHILIP TOMAN, SPOKESMAN FOR THE PLANTATION POLICE DEPARTMENT. "AS OF RIGHT NOW, HE'S UNCOOPERATIVE." ROTH, A RESERVE POLICE OFFICER AND VOLUNTEER FIREFIGHTER IN PLANTATION, IS HOLDING UP THE INVESTIGATION INTO FRIDAY'S SHOOTING, TOMAN SAID, HINDERING DETECTIVES WHO WANT TO KNOW THE MOTIVE FOR THE DISPUTE...
(Source: Police: We want to see witness in murder-suicide, South Florida Sun-Sentinel, 8/9/2006)

There is NO RESIDUAL EVIDENCE of Roth's WEEK of resistance to police in recent news. When Roth DID talk to police he was accompanied by his lawyer, via telephone, and had untimely, unfortunate lapses of memory. Police were getting upset (they say), the family was impatient, and why was Roth so "uncooperative" and inaccessible?

I don't have the answers, but I know unaddressed questions are dangling in the air.

So what makes Roth's rendition unquestioned truth, AND who says Peat did not lie to Roth? I live in Tacoma WA where our police chief lied to everyone prior to killing his wife and himself. IF Laura had bruises, IF - as she said - she believed Peat had anything to do directly with the death of a baby she was carrying, there is a possibility that the whole Roth-media version of an abortion being involved could be contrived. Sells papers - but I'm not seeing it substantiated. What I see is an in-house police investigation coupled with reporters slacking on their responsibility to inform.

OF COURSE I am not saying she had a reason for killing him. I'm only saying that the reason that she did may not be what we are left to believe by this weeks news. AND if she had just lost a baby - which I'm convinced she did - there are crazy hormonal crashes that could at least be considered - for the sake of both loving families. Considered.

On the day of the deaths neighbors heard Laura yelling about Peat had killed her baby. Roth himself says that Laura told Peat to tell his friend (Roth) about killing her baby. According to the police report, Laura said Peat hits her, that she had been sleeping on a couch when Peat woke her to fight, and attempted to show bruises on her thigh and arms to the police sergeants. One seargeant, according to the report, wouldn't look when Laura pulled down her pants to show a thigh bruise. Both sergeants say they didn't see anything. One sergeant asks if she is reporting abuse to tell them and they will arrest him and she, according to the police report, said no - that she just wants to go back in the house and talk to Peat. AND THEY LET HER? They did.
Something just is not right.
I don't have answers,
just dangling questions.

There are many other loose threads here, too lengthy for a blog. But there is one excerpt from the police report I really need to point out. Just a short while before the tragedy, the report says that:

...Peat asked Sgt. Swaney, "Do I need to leave? If she comes back I don't want any trouble".

Sgt. Swaney replied, it would be alright; "I told her to go home" believing that she would listen to him...

EVERY law enforcement agency needs an officer involved domestic violence policy in place, beFORE the situation arises that can't be undone. Plantation Florida didn't see this coming, and when it did, every opportunity to head off these deaths was missed. August 3rd I know they thought it couldn't happen there. One day later it's too late

Blessings to everyone involved in this horrendous loss. May others learn from it so that it's not in vain.
on 9/24/2006 4 comments 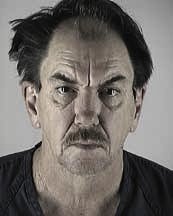 EXCERPTS FROM SEPTEMBER NEWS:
It wasn't a unanimous verdict, but jurors on Friday acquitted a retired Los Angeles sheriff's deputy of a murder charge in the shooting and stabbing death of his stepdaughter, instead convicting him of manslaughter... Hicks fired at least five shots... Lindlief was hit once in the chest and Donna Hicks twice in the chest. Hicks also stabbed Lindlief with a serrated knife... The defense argued that Hicks acted in self-defense as Lindlief grabbed the knife first. Two lawyers staged a re-enactment in court of the struggle that ended when Lindlief’s aorta was severed. After the verdict, defense attorney Jacques DeKalb said he thought that may have swayed the jury. Prosecutors told jurors the re-enactment was meaningless because Lindlief was small, already wounded and in shock.
“She weighed 100 pounds,”
Donna Hicks blurted out
during DeKalb’s demonstration...
Besides manslaughter, which carries a mandatory minimum 10-year sentence, Hicks was found guilty of attempted murder, assault and weapons charges
on 9/04/2006 2 comments 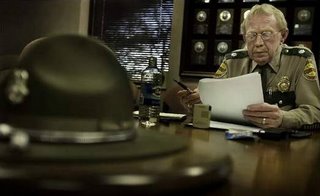 Former commander of the Tennessee Highway Patrol, Lt. Col. Larry W. Rucker, demoted to Lt. due to a recent cover-up scandal, was asked for his badge and gun last week when his wife accused him of beating her. She told police that Rucker punched and kicked her in the stomach, and said Rucker had hit her before.

..."They were arguing because he had been seeing the complainant's niece," officer David Fowler wrote in a report. "But when the suspect saw that another man had been talking to her, he went crazy, according to the complainant"...
on 9/04/2006 1 comments