Ludimila is gone now too.
She's from Brazil and was in South Carolina.
I wonder if she had friends,
or contact with her family

A week ago she was found dead, shot in the back of the head, and her husband abscounded or ridded of himself some other way. There is a manhunt going on...

Out of all the articles there is very little on Ludimila herself. The sum of it can be found in just one:

"...Ludimila Hiers attended a local college and worked in the shoe department of Sears at Northwoods Mall in North Charleston. 'She was very pretty and always friendly,' Meadows said. Neighbor Evelyn Jaime said the couple had lived in the house for at least three years.... 'She was just a young girl.'... The couple married in Hampton County on Aug. 9, 1998, when Ludimila Araujo, a native of Brazil, was 17..."

It comes down to that.
I so wish I could know her more... more OF her, to share.

A picture of Officer Hiers - ONLY because there's a search. 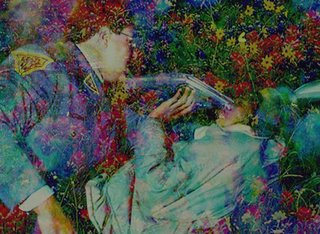 *All images there are created by Kelly Ann Thomas. All rights reserved.*

I am so very honored that Ms. Thomas has given me permission to use this image in projects regarding officer involved domestic violence. Please do not borrow this image or use it for any purpose via me without contacting her:
peaceandgoodkarma@sbcglobal.net

Also, I am equally thankful to Tacoma, Washington's News Tribune for recently giving me the okay to use their articles concerning officer-involved domestic violence in some projects that I am working on as well. 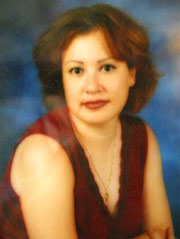 U.S. Border Patrol Field Operations Supervisor Rodolfo Greene shot his wife Rebecca Greene. He then made an emergency call and shot himself. Rebeca's 6 year old daughter and a 10 year old cousin were home at the time.
on 3/23/2005 0 comments 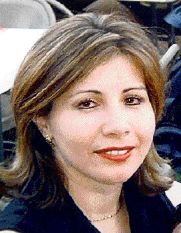 [El Paso, TX] Border Patrol Officer Rodolfo Candelaria walked into his wife's place of work and shot and killed her. Maria died from multiple gunshot wounds to her neck and chest. He took two hostages and six hours later shot and killed himself.
Two young boys, nine and 12, became orphaned.

Prosecutors argued Green Bay, WI Police Dective John Maloney strangled his wife then set fire to her home to cover the crime. He was convicted of first-degree intentional homicide, arson and mutilation of a corpse.
on 3/23/2005 0 comments

Natalie Wagner, 24, a police officer for the village of Shorewood, Wisconsin, was killed by a shotgun blast to the head in the presence of her live-in boyfriend, Michael Quigley, an officer with the Milwaukee Police Department. He says it was a suicide. People who knew her say it was murder. 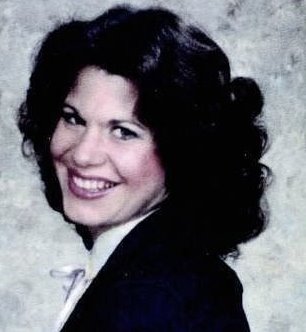 On February 8th, 2005 a book by Jordan Fisher Smith called Nature Noir: A Park Ranger's Patrol in the Sierra, was released nationally by Houghton Mifflin. In it were some details, name changed, of the disappearance of Janet Kovacich in 1982, wife of Paul Kovacich, a sheriff's deputy with Placer County. Ever since, the Auburn police have been digging in the yard and finding. Now they have found human remains. Folks are looking at the deputy.
on 3/23/2005 1 comments

but it was the gunshot to the head that killed her.

He then stole a sheriff's sport-utility vehicle and kept troopers at bay on an interstate for 4 1/2 hours.

Washington - 2003
Crystal and Tacoma Police Department Police Chief, David Brame Sr., were divorcing, living apart, and David had the kids for weekend visitation. While sitting sideways in an open-doored car, he pulled her head down towards his lap, shot her in the head, and immediately shot himself in the head as well. There's a library-worth more of information because of the two Washington State Patrol investigations, the Washington Association of Sheriff's and Police Chief's investigation, the FBI inquiry, the competing, prolific newspaper agencies and their investigative reporters, an outspoken Citizens Panel, a muliti-disciplinary committee of 40 individuals assigned and volunteering to study the tragedy and bring forth living fruit from the two deaths, the passing of state wide laws, the creation of the most comprehensively written officer-involved domestic violence policy in the country, probing websites, an impending $75M lawsuit against the city, more lawsuits, seeking national legislation, experts consulting across the country, writing, publishing, conferencing, preparing... and oh so much more. The news went to Europe, Australia, South America, Japan, and just about every place on the globe with a connected press - Not just because Crystal's soon-to-be ex was the chief.
It was because every extra obstacle to safety suffered by the victims of officer involved dv was intensified and now oh-so public.
No one paid attention when she said he choked me.
No one came to her to help when she said he was threatening her life.
She was begging for a restraining order.
On public record she said that he held a gun to her head - told her that

accidents happens.
It was because after the deaths it was uncovered how many people, and how high up the power-ladder, his rape of a woman was known before his "rise" to chief.
It was because it was learned after his murder and suicide that his psych testing showed that he really should have never been allowed to become a police officer at all.
It was because of how the 911 dispatcher responded to Crystal's call just two weeks before her death, once they knew who she was reporting - the chief and an assistant chief..
It was her call from a phone booth the night before her death that
she was afraid for her personal safety
more now
than ever before.

It was because while the city closed their eyes, she said that other high ranking police officials were actually HELPING her husband to intimidate and track her, call her and document her calls.
Was her phone tapped? She tried to find out.
Was her food poisoned? She was almost sure.

How much more should I go on?

This is all still in progress as the preparation for trial begins.
on 3/23/2005 2 comments March 9, 2005
WHIOTV.com.
DAYTON, Ohio -- A grieving mother made an emotional plea for help two weeks after her daughter was shot to death inside her home.
On Wednesday morning, Nevada Blake asked Dayton City Commissioners not to let her daughter die in vain. Niema Thompson-Blake, 30, died on Feb. 19 after police said she was shot by her husband, Dayton police officer Michael Blake.
Nevada Blake believes Michael Blake murdered her daughter. She knows that city commissioners did not have the answers but she hopes they will put pressure on those who do.
Nevada Blake said she is frustrated with the lack of action in the two weeks since her daughter's death.
Michael Blake was handcuffed by officers at the scene and taken in for questioning. However, he was never arrested and so far county prosecutors have not filed any charges in the case.
Sources told NewsCenter 7 that Michael Blake claimed his wife came at him with a butcher knife. Nevada Blake said that is not the case and said her daughter was a loving mother of three children.
Nevada Blake also claimed that Michael Blake called two other people before he called police dispatchers. She said her daughter's marriage turned violent before her death.
Dayton Mayor Rhine McLin was the only city leader who responded to Blake's plea. She said the city would do what it supposed to be done in this type of matter.
Police Chief Julian Davis referred questions to the prosecutor's office. Authorities said prosecutors met once with detectives to review the case. It is possible that investigators may come back with new information or ask for charges to be approved.
[police officer involved domestic violence oidv intimate partner violence ipv abuse law enforcement public safety lethal fatality fatalities murder ohio state politics teflon unsolved unresolved]
on 3/09/2005 14 comments