[MA] Detective Fanion's wife Amy died by a shot from his service weapon. 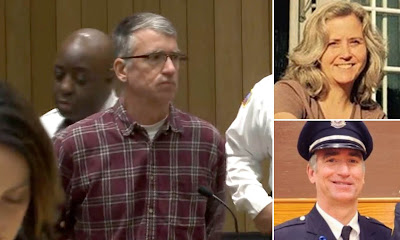 RETIRED WESTFIELD POLICE DETECTIVE BRIAN FANION, ACCUSED OF KILLING WIFE AND STAGING DEATH AS SUICIDE, MAKES 2ND BID FOR PRETRIAL RELEASE
Updated Feb 14, 2020
[Excerpts] A retired Westfield police detective accused of killing his wife and staging it as a suicide made a second bid for pretrial release Friday... [Superior Court Judge Francis] Flannery declined to release Fanion at that time... Brian Fanion, 56, was arrested on Nov. 7 and charged with his wife’s murder. Amy Fanion, 51, died on May 18, 2018, from a gunshot wound to the head. Her death was originally treated as self-inflicted, until police began to suspect her husband actually killed her with his service weapon on his lunch hour. Fanion has pleaded not guilty to the murder charge. The couple’s two children and many members of Amy Fanion’s immediate family - including her brother, who was at the couple’s house on the day of the shooting - stand behind Brian Fanion, said defense attorney Jeffrey Brown. "They accept that Amy Fanion killed herself"... [Full article here]

FROM NOVEMBER 2019:
BRIAN FANION’S STORY WAS INCONSISTENT, SAID PROSECUTORS
November 8, 2019
[Excerpts] Retired Westfield Police Det. Brian Fanion  is being held without bail... Investigators with the Massachusetts State Police found inconsistencies with the gathered evidence and Fanion’s statements, and began investigating her death as a homicide almost immediately... District Attorney Anthony Gulluni’s office later was granted a warrant to search Fanion’s home for evidence and “for a high definition survey scan for various digital evidence items, including computers, tablets, and cellular devices. Forensic examinations were later conducted on these items that revealed incriminating evidence.” The state medical examiner’s office found that the gun was not fired from right next to Amy’s head, but rather from a distance of about 18-inches away... An investigation into text messages and Brian Fanion’s search history revealed a pattern in which he expressed concern over divorcing his wife because of how that may affect his police pension and retirement... Brian’s search history revealed that he had been looking up the state medical examiners office, apartments for rent in the area, common poisons, and common sources of radiation just hours before the time of his wife’s death... Fanion retired from the Westfield Police Department shortly after his wife’s death, at the time citing that his own service pistol was used... [Full article here]

WHAT WE KNOW SO FAR ABOUT THE MURDER CASE AGAINST RETIRED WESTFIELD COP BRIAN FANION, ACCUSED OF KILLING WIFE AND STAGING HER SUICIDE
Nov 08, 2019
[Excerpts] ...Amy Fanion, a mother of two, died on May 8, 2018. Brian Fanion reported to police that he had stopped at home during his lunch break on a Tuesday afternoon, that he and his wife argued, and that she shot herself in the head while he was in the bathroom, Assistant District Attorney Mary Sandstrom said during Brian Fanion’s arraignment on Thursday. Sandstrom said Fanion called 911 just after noontime, and his colleagues arrived at the couple’s home to find him crouched beside his wife, holding her hands in the dining room... In the days before Amy Fanion’s death, her husband had begun Google searching topics including household poisons, the impact of divorce on a public pension and gunshot residue. He was looking online at apartments just hours before her death, the prosecutor said... [Defense Attorney Jeffrey] Brown denies Fanion was embroiled in an affair and said Amy Fanion had historically struggled with anxiety and depression... Brown said Amy Fanion kept a journal filled with Biblical references, hinting toward peace in death just six days before she died. “On May 2, her final journal entry read: ‘Come to me, all you who are weary and burdened, and I will give you rest. ... Take my yoke upon you and learn from me, for I am gentle and humble in heart, and you will find rest for your souls,’” Brown recited. “The passage I just read is associated with death.” [NO IT'S NOT!]... Sandstrom said Amy Fanion’s wound was not consistent with one that was self-inflicted... Fanion was indicted by a grand jury on Wednesday and arrested the same day. He was held overnight and arraigned Thursday morning before many rows of family members and supporters. Brown asked for Fanion to be released on $75,000, arguing that he remained in the local community even with the investigation “hanging over his head” for the last 17 months. Brown also cited Fanion’s deep roots in the community and his volunteer efforts at local homeless charities and his church. Sandstrom argued for Fanion to be held without the right to bail pending trial. Hampden Superior Court Judge Frank Flannery ordered Fanion to be held. A pretrial hearing is scheduled for Jan. 9. [Full article here]

AMY FANION OBITUARY
Published in The Republican on May 12, 2018
[Excerpt] Amy (Hansen) Fanion (51) of Westfield MA passed away May 8, 2018. She is survived by her beloved husband Brian Fanion and two children Travis and Tori Fanion. Amy was a kind, loving, selfless woman bringing a ray of sunshine full of Peace, Love and Joy to all who knew or needed her. A passionate wife and mother, she was a lover of family, nature, gardening, hiking, kayaking and bicycling and an avid volunteer happiest working behind the scenes in her community and church with unwavering faith in her God and Savior. She is survived by... [Full article here]

CHD'S CANCER HOUSE OF HOPE
May 14, 2018
We are profoundly saddened by the passing of our dear friend and devoted volunteer, Amy Fanion. Personally, I will miss Wednesday mornings, talking with Amy about family, our dogs, hiking, big family vacations, and of course, how to comfort those struggling with cancer. The weekend before she passed away, Amy came to the House and trimmed back the butterfly bushes and the other plants that needed spring pruning so it would be ready for the Liberty Mutual Insurance volunteers arriving that Monday. Amy was with the House for many, many years, going back to the time when it was still in Westfield, Massachusetts. Amy was especially attached to the library at the House, kept it organized, and helped our guests find the right resources they needed to support them. Our condolences go out to Amy's family, and our hearts and prayers are with her.
[police officer involved domestic violence oidv intimate partner violence ipv abuse law enforcement public safety lethal fatality fatalities murder alleged suicide massachusetts state politics]
on 2/16/2020