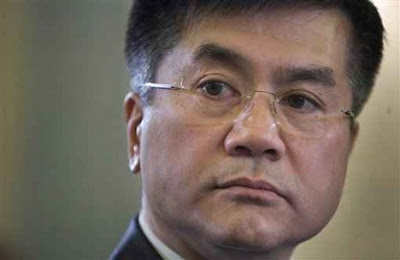 "...This bill requires that every police department and sheriff’s department in the state [of Washington] adopt and enforce policies to deal with domestic violence committed by their officers by June 2005..."
Governor Gary Locke’s Remarks
Public Safety Bill Signing
March-15-04

I’m pleased to be in the great city of Tacoma, and I appreciate this opportunity to join you here at the Tacoma YWCA.

We are here to sign into law an important victory for domestic violence victims in our state. And its appropriate to do so at the YWCA which has been dedicated to helping women for 98 years and has a shelter for victims of domestic violence.

We are also here to remember Crystal Brame, who died less than a year ago (April 2003). Crystal was the victim of years of domestic abuse. She was violently, senselessly taken from us. Crystal was a loved and loving mother, sister, daughter and friend. She left behind many who mourn her loss and cherish her memory. Her death left us with somber, agonizing questions: How could this have happened? And what can we do to prevent it from ever happening again?

The terrible tragedy of Crystal Brame’s death painfully reminded us that domestic violence is found in every walk of life, every economic class, and every kind of relationship or family. Far too often, this is a concealed but deadly crime; one that comes to light only after it is too late.

Here in Washington, we have some of the strongest laws in America against domestic violence. They include mandatory arrest, an expedited process for protective court orders, stiff penalties, and a confidential address registry for victims hiding from their abusers. We strengthened those laws four years ago, based on recommendations of the Domestic Violence Action Group I appointed after the tragedy of Linda David who was abused by her state paid caregiver, her husband.

To honor the memory of Crystal Brame and other victims of domestic violence, we must do more.

That’s why we are here today. The bills I am signing this afternoon will strengthen our laws:

This bill requires that every police department and sheriff’s department in the state adopt and enforce policies to deal with domestic violence committed by their officers by June 2005.

These policies must address:
The bill also requires the Washington Association of Sheriffs and Police Chiefs to develop, by December 2004, in consultation with victim advocates, a model policy that law enforcement agencies can use.

This new law requires hard and earnest work by police and sheriffs’ departments across the state. I urge every law enforcement agency to adopt the policies before the June 2005 deadline, and to firmly apply them whenever there is a suspicion or report that an officer is involved in domestic violence. Let us do all we can to make sure that no member of a law enforcement family will ever again be victimized like Crystal Brame.

A task force that formed after the tragedy developed this bill. The co-chairs were Justice Barbara Madsen of our state Supreme Court, and attorney Debra Hannula of Pierce County.

Attorney General Christine Gregoire and her office were part of the task force. Attorney General Gregoire also hosted a statewide summit on domestic violence last fall, and produced a handbook for local governments on addressing this issue. Her work and the recommendation of the summit became part of this legislation. She wasn’t able to attend this bill signing today because of a scheduled meeting in Washington, D.C.

The Washington Association of Sheriffs and Police Chiefs, the Washington Council of Police and Sheriffs, the Washington Coalition Against Domestic Violence, and many other groups and individuals also worked to develop and pass the bill. Senator Debbie Regala and Representative Pat Lantz were the prime sponsors and shepherded the legislation to final passage.

This bill prohibits a police officer from bringing a weapon into a courthouse if the officer is there as a party to a case involving harassment or domestic violence. Since a tragic domestic violence murder in the King County Courthouse about ten years ago, only police, military, or security personnel have been allowed to bring weapons into courthouses. This bill closes a loophole in that law to make sure that an officer in court as a party to a harassment or domestic violence case cannot bring in a weapon. Representative Judy Clibborn was the prime sponsor of this bill.

Bill 1645 protects victims of domestic violence, sexual assault, and stalking with respect to residential rights and responsibilities. First, it allows a victim to leave a rented house or apartment without further obligation to pay rent, beyond the current month’s rent, even if there is a lease for several more months. Second, it prohibits rental property owners from discriminating against tenants or prospective tenants who have been victims, either by evicting them or by refusing to rent to them. Groups representing landlords as well as victims of domestic violence and sexual assault supported this bill. The prime sponsors are Representative Lynn Kessler and Senator Don Benton.

This bill authorizes courts to impose an additional $100 penalty on those convicted of domestic violence crimes. These funds are to be used for local programs to prevent domestic violence, advocate for its victims, and prosecute abusers. The funds do not come to the state. They stay in the county or city where the court imposed the penalty. The prime sponsors of this bill were Senator Luke Esser and Representative Dave Upthegrove.

I congratulate the sponsors and the many people who worked to enact all these bills into law. I also commend the Legislature for adding $2 million to the state budget for programs that provide shelter, advocacy, and other help to victims of domestic violence. This is more than a 50 percent increase over current state funding for these services. It will help these anti-abuse programs across the state meet the nearly 35,000 requests for help they could not meet last year.

But the strongest laws and unlimited funding will not prevent domestic violence, or protect its victims, unless we are all committed to changing the values and attitudes in our culture that allow this violence to flourish. Values and attitudes such as: that men have a right to dominate and control women. Or that the physically fit have a right to victimize those with disabilities. Or that wearing a badge puts someone above the law.

Whether we are elected officials, police officers, private employers, co-workers, neighbors, landlords, or citizens, let us always remember that preventing domestic violence, as our 1999 task force emphasized, is everybody’s business.