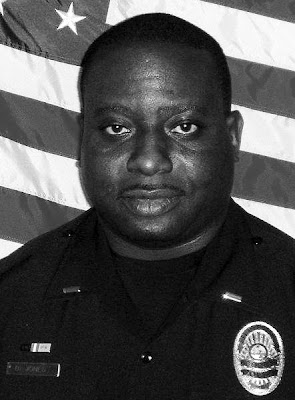 Previous Post:
[FL] NOT ARRESTED FOR DOMESTIC VIOLENCE: Cocoa Deputy Police Chief Bobby Jones - ...The witness who tried to help Jones' girlfriend as she was being assaulted says his life was threatened. The father of the assaulted woman says she has tried to get a protection order. Jones has a wife and kids. Nobody's safe. And despite photographs and a witness, this deputy chief was not arrested...

COCOA DEPUTY POLICE CHIEF HIT WITH RESTRAINING ORDER
Florida Today
By Rebecca Basu
January 27, 2011
[Excerpts] A judge has granted the alleged victim in a dating violence investigation involving Cocoa Deputy Police Chief Bobby Jones a restraining order. At a hearing in the matter, both parties attended and agreed to the order without admissions, which means the allegations in the victim’s petition were not addressed. Jones, 38, could face assault charges stemming from an alleged altercation in mid-December in downtown Melbourne... Jones, who was not arrested and has not been charged, is on paid leave. He earns $72,000 annually... The order says Jones should have no contact with ]the victim] and not go within 500 feet of her home and workplace, not go within 100 feet of her car and that Jones shall not use or possess a firearm or ammunition except while performing duties as a law enforcement officer... “I think he may try and threaten me to not press charges,” she wrote. “He may be afraid of losing his job.” Court records also show that earlier this month Jones’ wife, Elizabeth, filed for divorce... [Full article here]
[police officer involved domestic violence oidv intimate partner violence (IPV) abuse law enforcement public safety adultery preferential treatment florida state repeat hx word games terroristic teflon brotherhood]
on 2/01/2011