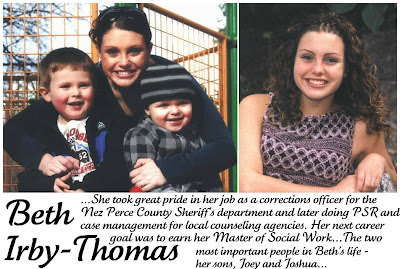 ...Judge Michael Griffin in ordering the sentence noted that a presentence investigation found Thomas' other ex-wives said he was bad-tempered and dangerous...


PREVIOUS POST:
[ID] Ex-Deputy Thomas killed his ex-wife Beth Marie Irby-Thomas, mom of 2 and former corrections officer - ...She took great pride in her job as a corrections officer for the Nez Perce County Sheriff's department and later doing PSR and case management for local counseling agencies. Her next career goal was to earn her Master of Social Work...The two most important people in Beth's life - her sons, Joey and Joshua... [WHO KNEW WHAT WHEN?]
...officers had responded to disputes between the couple for the past couple years...

Thirty-eight-year-old Joseph Thomas Junior received a maximum life sentence with a minimum of 25 years by Judge Michael Griffin. Thomas was found guilty for the murder of his 28-year-old ex-wife Beth Irby-Thomas on May 1st.

"I take responsibility for the tragedy that is beyond measure," said Thomas. "I cannot express enough remorse or apology for not helping Beth when she needed it most. I am ready to receive my sentence and move forward and trying to make my way back to being a positive, productive member of society."

Judge Griffin said the decision was not taken lightly and both sides of the case were equally heard. In prosecuting attorney Dan Spickler's closing statement he said, "Thomas has had every right of justice the system can give to him."

Thomas has the right to appeal his sentence. Defense attorney Paul Clark was also granted a motion to withdraw from Thomas's case, and a new attorney will be assigned to Thomas once Clark completes the process of filing for an appeal.

LEWISTON, Idaho — A former Nez Perce County Sheriff's deputy convicted of strangling his ex-wife to death in northern Idaho has been sentenced to life in prison.

Joseph A. Thomas Jr., 38, was sentenced Friday in 2nd District Court. The Lewiston Tribune reports that he must serve at least 25 years before he's eligible for parole.

Thomas on Dec. 16 was convicted of first-degree murder in the death of 28-year-old Beth Irby-Thomas.

The Lewiston woman was found under a blanket in her living room May 1 with a belt wrapped tightly around her neck. During trial, prosecutors argued Thomas killed his ex-wife, while he claimed she died accidentally while engaging in a dangerous sex practice called autoerotic asphyxiation.

Thomas claimed he had previously observed his wife choking herself during a sexual act, according to a court affidavit.

Judge Michael Griffin in ordering the sentence noted that a presentence investigation found Thomas' other ex-wives said he was bad-tempered and dangerous.

"I take responsibility for the tragedy that is beyond measure," he said. "I cannot express enough remorse or apologies for not helping Beth when she needed it most."

"Before this happened we never had conflict with your family and I just pray at some point some form of a miracle can happen that you will know where our hearts are at and that I'm trying to speak the truth of what I know of Joe," she said.

To Judge Michael Griffin she said, "I respectfully ask you for mercy and leniency as you determine my brother's future."

But Griffin in ordering the life sentence noted that a presentence investigation found Thomas' other ex-wives said he was bad-tempered and dangerous. And a screening by the investigator implied Thomas might not be able to make a mature commitment to a woman.

The attorney who had been representing Thomas said an appeal will be filed. But that will be done by a new attorney, as Griffin allowed the current attorney to withdraw as Thomas' attorney after the hearing.
[police officer involved domestic violence oidv intimate partner violence ipv abuse law enforcement public safety lethal fatality fatalities murder idaho state politics repeat hx teflon]
on 3/04/2012