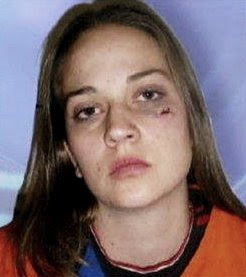 ...[Matthew] Meyer hit [Officer Randi] Hieb in the face, causing her to bleed... Meyer locked Hieb out. Hieb got a handgun from her vehicle and fired two shots through the back door... Meyer also suffered punches to his face and ear by Hieb...

The canine officer for the Ashland Police Department remained in the Saunders County Jail today after she fired a service weapon into her house during an altercation with her roommate, authorities said.

Officer Randi Hieb, 24, was arrested Sunday on suspicion of third-degree domestic assault, a misdemeanor, and two felonies, discharging a firearm into an occupied dwelling and use of a firearm to commit a felony.

Saunders County Attorney Scott Tingelhoff said he plans to turn the investigation over to a special prosecutor to avoid any conflict of interest because his office prosecutes cases handled by the Police Department.

The special prosecutor would determine whether charges should be filed against Hieb or her roommate, Matthew R. Meyer, 24.

Meyer also was arrested Sunday on suspicion of third-degree domestic assault, a misdemeanor, Tingelhoff said. Meyer is a firefighter for the Omaha Fire Department.

Tingelhoff said Hieb has worked for the department for about two years. He called Sunday's incident totally out of character. "She has been a good officer, who seems to be performing her duties as required," Tingelhoff said.

According to police reports, Hieb told Nebraska State Patrol investigators that she and Meyer had gone to an Omaha nightclub Saturday night to celebrate a friend's birthday.

Before leaving for the bar, she had at least one drink. At the bar, Hieb had several more drinks.

Hieb said that Meyer had several drinks at the bar. They left shortly before midnight. While driving home, Meyer hit Hieb in the face, causing her to bleed, according to police reports. Hieb stated that they continued to argue during the drive to Ashland.

Back at their rental house, Meyer locked Hieb out. Hieb got a handgun from her vehicle and fired two shots through the back door, shattering the glass so she could unlock the door and go in.

The State Patrol report said that Meyer also suffered punches to his face and ear by Hieb and that he may have been injured during their drive home.

Tingelhoff said that Hieb was suspended because of her arrest.

The Omaha Fire Department has begun an investigation into the incident, said Capt. Jim Gentile, a spokesman for the department.