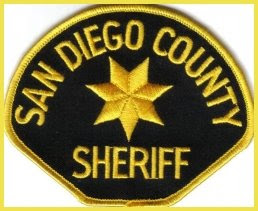 ...Martinez, 32, pleaded guilty to "causing corporal injury to a roommate"... If accepted to the program, he could keep a job and live at a county-provided "confinement home"...

SHERIFF'S DEPUTY PLEADS GUILTY TO BEATING GIRLFRIEND
signonsandiego.com
By Mark Arner
6:20 p.m. June 4, 2009
[Excerpts]Imperial Beach Sheriff's deputy Leanno A. Martinez pleaded guilty in Chula Vista Superior Court Thursday to a felony charge of beating a live-in girlfriend. As part of a plea bargain he agreed to serve 180 days in jail, authorities said. Martinez, 32, pleaded guilty to "causing corporal injury to a roommate," before Superior Court Judge H. Ronald Domnitz, said Deputy District Attorney Enrique Camarena. He is scheduled to be sentenced July 14. Domnitz issued a restraining order banning Martinez from having any contact with his former girlfriend, Camarena said. Domnitz also required Martinez to take a year-long class that teaches the effects of domestic violence and how to avoid it. Martinez will be placed on probation for three years... Sheriff's officials would not say how long Martinez has worked for the department, or whether he has been on leave since his arrest... The plea bargain will allow Martinez to enter a work furlough program and avoid serving his sentence at a county jail. If accepted to the program, he could keep a job and live at a county-provided "confinement home," Camarena said. He would only be permitted to leave the home to go to court or go to work. [Full article here]
[police officer involved domestic violence law enforcement california jail]
on 6/05/2009