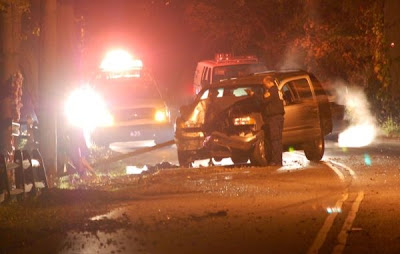 ...Michelle's ex-husband... said she was shot five times, but was expected to survive. "She's the mother of my two kids; she's a good mother, so thank God," he said. "Did she deserve this? No. It's just a bad situation." The couple have two teenage daughters; the 16-year-old was home during the Tuesday attack but not hurt...

EX-COP ACCUSED OF SHOOTING WIFE IN MIDDLE ISLAND
LongIslandPress.com
Written by Timothy Bolger
October 21, 2009
[Excerpts] Suffolk police arrested a retired New York City Police officer after he allegedly broke into his estranged wife’s Middle Island home and shot her on Tuesday night. Darryl Fowler, 43, of Amityville, broke into the victim’s Dorado Court South home and shot 46-year-old Michelle Fowler multiple times shortly before 11 p.m., according to 6th Squad detectives. Fowler fled the scene... and sideswiped a southbound ambulance that was responding to aid his estranged wife... A short time later, the Yukon also struck a tree. The victim was airlifted to Stony Brook University Medical Center where she was listed in stable condition... Fowler was charged with second-degree attempted murder, burglary, assault, aggravated criminal contempt and criminal use of a weapon... The former officer was charged with criminal contempt and criminal mischief for allegedly kicking his estranged wife’s door on Sept. 28, which violated a year-long ”refrain from contacting” order of protection that a judge issued in April... After that incident, a judge also issued a “stay away” order of protection [Full article here]

COP CHARGED IN SHOOTING FACED 2 ORDERS OF PROTECTION
Newsday
Andrew Strickler
October 21, 2009
[Excerpts] ...Suffolk police said orders of protection were issued in April and September against Darryl Fowler, 43, arrested in his hospital bed Wednesday at Stony Brook University Medical Center and charged with trying to murder his wife... Police said Fowler, who retired from the NYPD 10 years ago, burst through the locked door of the Middle Island home the couple once shared just before 11 p.m. Tuesday. He then went upstairs and shot her as she lay in bed. Minutes after his wife's teenage daughter called 911, Fowler was at the wheel of a sport utility vehicle on Bartlett Road a short distance away when he sideswiped an ambulance rushing to assist her, swerved off the road and crashed head-on into a tree... Michelle, 46, survived the shooting and was airlifted to Stony Brook... In April, police said, Darryl Fowler called 911 from the house and reported his wife bit him; she told officers he'd pushed her, said Det. Sgt. James Madden. They agreed to resolve the matter, and no charges were filed. The next day, a Suffolk family court judge issued Darryl Fowler a stay-away order. Police were again called there on Sept. 28 by a 911 call from Michelle; the report indicated Fowler damaged the front door when entering, police said. Fowler, who no longer lived at the home, was arrested and charged with criminal contempt for violating the order of protection and criminal mischief. The next day, a Suffolk criminal court judge placed a second order of protection against him. Michelle's ex-husband, Wayne Cummings of Coram, said she was shot five times, but was expected to survive. "She's the mother of my two kids; she's a good mother, so thank God," he said. "Did she deserve this? No. It's just a bad situation." The couple have two teenage daughters... Fowler was charged with second-degree attempted murder, first-degree burglary, assault, aggravated criminal contempt and criminal use of a weapon. Police said he will be arraigned in the hospital bed if he does not get medical clearance to go to court. [Full article here]
[police officer involved domestic violence law enforcement lethal terror new york nyc nypd ppo]
on 10/23/2009