[AL] Littleville cop at center of domestic SWAT standoff is an ex-Tuscumbia cop who quit after a domestic, DUI, and high speed chase 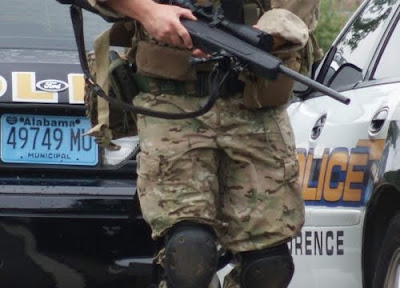 "Resigned" Tuscumbia Police Officer David Saccocio is back. This time as a Littleville Police Officer surrounded by SWAT, with neighbors fleeing, and making "terroristic threats." Where will he be next?
TODAY'S NEWS:

...“One of our officers is going through some extreme family issues... He barricaded himself in his apartment, threatening to do harm to himself and others"...

...Florence Deputy Chief Tony Logan said his department was notified of the incident when Saccocio's girlfriend called 911 from her residence on Crest Street and reported Saccocio was "tearing up the house"...


LITTLEVILLE POLICE OFFICER SURRENDERS TO AUTHORITIES AFTER 8 HOUR STANDOFF
Shoals Insider
Veronica T. Lopez
Sun, Jun 20, 2010
Authorities tell the Shoals Insider, a Littleville Police Officer surrendered to police around 11:30 a.m. Saturday, this after an eight hour standoff with SWAT teams from Muscle Shoals, Florence PD, and the ABI. According to sources close to the situation, Officer David Saccoccio, 30, will be charged with making a terroristic threat, a felony, after he is treated and released from a local hospital. SWAT teams had to use tear gas to force Saccoccio from the apartment at 100 Madeline Drive, Littleville. The incident reportedly began as a domestic situation. Saccoccio's wife filed for divorce in May. [LINK]

LITTLEVILLE POLICE OFFICER ARRESTED AFTER 9 HOUR STANDOFF
WSFA, WAFF
By Trang Do tdo@waff.com
Sun, Jun 19, 2010
[Excerpts] A standoff in Colbert County ended with a Littleville police officer in custody... Several law enforcement agencies responded to the Summerfield Apartments at 100 Madeline Drive around 1 a.m. Saturday after police received a call from one of their fellow officers. Littleville Police Chief Chris Joly said the officer received a distraught phone call from Saccoccio, and feared he would hurt himself or possibly others. Chief Joly said people living in the apartment complex were evacuated... Muscle Shoals hostage negotiators communicated with the officer over his cell phone. The nearly nine-hour standoff ended when tear gas was deployed. Chief Joly said Saccoccio was removed from the apartment without injury and taken to an undisclosed hospital... Saccoccio is charged with making a terrorist threat. He's being held at the Colbert County jail. [Full article here]

OFFICER ARRESTED AFTER NINE HOUR STANDOFF
WAAYTV.com
June 19, 2010
[Excerpts] ...Police got the call just after one Saturday morning that Officer David Saccoccio had barricaded himself inside his Summerfield Apartment Complex and was making threats.  Officials evacuated nearby residents. Littleville Police Chief Chris Jolie said several law enforcement agencies assisted in defusing the situation including the Muscle Shoals and Florence Swat Teams as well as a police negotiator... WAAY 31 spoke to a neighbor who said that Saccoccio was having family problems... His bond was set at $100,000. [Full article here]

OFFICER SURRENDERS AFTER STANDOFF: A Florence SWAT team member returns to a vehicle after a standoff Saturday
Times Daily
By Dennis Sherer dennis.sherer@timesdaily.com
June 19, 2010An 11-hour standoff between law enforcement officers and one of their own ended peacefully Saturday when hostage negotiators persuaded the Littleville police officer to surrender. Littleville Police Chief Chris Joly confirmed the man was a Littleville police officer... Neighbors and others at the scene identified the man as David Saccocio... Neighbors said Saccocio and his wife are going through a divorce. They added the officer moved into the apartment in May. Joly said the standoff began about 1 a.m and ended about 11:45 a.m... “One of our officers is going through some extreme family issues,” Joly said. “He barricaded himself in his apartment, threatening to do harm to himself and others... Saccocio formerly worked as an officer with the Tuscumbia Police Department. He was arrested in December 2007 in Florence and charged with driving under the influence after police received a report that Saccocio was causing a disturbance at his girlfriend's house on Crest Street. The arrest prompted Saccocio to resign his job in Tuscumbia. Saccocio moved to Rhode Island briefly before returning to the Shoals and accepting a job with the Littleville Police Department... Police fired at least 10 tear gas canisters through the windows of Saccocio's apartment about an hour before he surrendered. When police began firing tear gas, the loud boom associated with firing the canisters prompted some of Saccocio's neighbors, who were gathered about ¼-mile away, to begin praying aloud for his safety and the safety of the police officers. “I pray they don't have to shoot him,” said Barry Cummings, who also lives in the apartment complex... Tuscumbia Police Chief Tony Logan, who visited Saccocio at the jail, said he was doing fine. “He realizes he needs some help,” Logan said. [Full article here]

TUSCUMBIA POLICE OFFICER CHARGED WITH DUI
By Bernie Delinski
December 30. 2007
[Excerpts] A Tuscumbia police officer was arrested and charged with driving under the influence late Saturday night after Florence police pulled him over following a short high-speed chase... David Saccocio, 28, was charged with DUI... Florence Deputy Chief Tony Logan said his department was notified of the incident when Saccocio's girlfriend called 911 from her residence on Crest Street and reported Saccocio was "tearing up the house"...

TUSCUMBIA POLICE OFFICER ARRESTED FOR DUI
Times Daily, AL
By Bernie Delinski
December 31. 2007
[Excerpts]...The chief said Saccocio's next shift was scheduled to start Wednesday, but he will not be allowed to return before the issue is resolved... Authorities said [Tuscumbia Police Officer David Saccocio] refused to submit to a breathalyzer test... "It's a real shame that this happened," [Tuscumbia Mayor Bill] Shoemaker said...

OFFICER RESIGNS AFTER DUI ARREST
Times Daily, AL
By Bernie Delinski
January 01. 2008
A Tuscumbia police officer who was arrested on a charge of driving under the influence has resigned... [Tuscumbia Police Chief Terry] Sherron said he has been told that Saccocio already has flown back to his hometown in Rhode Island. "By his resignation, any further investigation or disciplinary action is moot at this point," Sherron said... "We hate that this kind of thing happened," he said. "We always try to hold ourselves to a higher standard."...
[police officer involved domestic violence oidv intimate partner violence (IPV) abuse law enforcement public safety lethal suicidal homicidal repeat hx gypsy cop hop alabama state]
on 6/20/2010