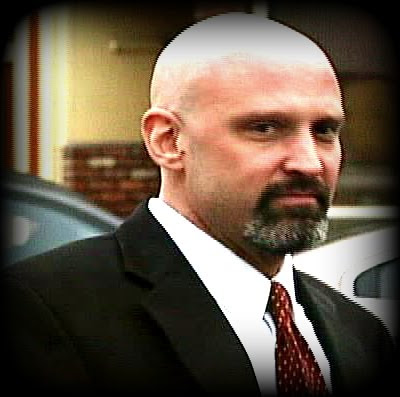 Did ex-Schenectady Police Officer John Lewis's new wife think she was just what he needed and could calm him? Did she feel somehow different from the others? Better?  Did she believe what he said - that the prior domestic charges were all lies  -- or self defense?  I'm not blaming her - but when a man is this known for abusing women - can't we learn? He shouldn't be able to find a date, much less a wife. I said it.
...The NEW wife of twice-fired-and-appealing Officer Lewis has injuries to face and arms... Lewis allegedly chased his wife into the street, and continued to beat her despite being seen by several neighbors... he allegedly choked the woman... The victim declined to file charges but police had enough evidence to charge Lewis with third-degree assault... He has notified the city that he intends to sue to get his job back, contending the city conspired with his former wife to get him fired... Lewis is appealing the city's decision in April to fire him following disciplinary hearings prompted by Lewis' six arrests in the past two years... His attorney points out that an independent arbitrator gave Lewis his job back after he was fired in 1998....

Previous posts on blog:
FORMER SCHENECTADY POLICE OFFICER ARRESTED AGAIN
Fox23News
Reported by: Torie Wells
Videographer: Z. Radick
Last Update: 6/12 8:51 pm
[Excerpts] John Lewis was fired back in April after a string of domestic and drunk driving incidents. Tonight, he faces an assault charge after allegedly beating his new wife. This marks the 7th time Lewis has been arrested since 2008. Former Schenectady police officer John Lewis was arrested last night by the department he used to call his own. "We received a call just before 10 o'clock for a male chasing a female and physically beating her," said Patrol Officer Michael Crounse, with the Schenectady Police Department. That woman, police say, is Lewis' new wife. Police say he chased her from their Oregon Avenue home, to Park Avenue, two streets away. "She had some injuries to her face and arms. The suspect had fled," said Crounse. He had fled back to the Oregon Avenue home, where he was arrested. This all happened just hours after he was released on his own recognizance for an unrelated federal weapons charge... Lewis is in Schenectady County jail tonight. Lewis has said he plans on appealing his termination with the department. His attorney points out that an independent arbitrator gave Lewis his job back after he was fired in 1998. [Full article here]

FIRED COP IN JAIL AGAIN: John Lewis charged with beating wife after release in federal weapons case
Albany Times Union
By Paul Nelson and Brian Nearing
Sunday, June 13, 2010
[Excerpts] Just hours after being released on federal weapons charges for having a fallen city police officer's handgun, fired cop John Lewis was arrested overnight Friday on charges that he beat his new wife in the street outside their home. Lewis, 40, remained in the county jail Saturday on the domestic assault charge, and should he post the $3,000 bail needed for his release, he will be whisked directly to federal court on the weapons count, said Schenectady County District Attorney Robert Carney. "Mr. Lewis is a man whose life is out of control," Carney said. He said federal officials filed a retainer on Lewis, which could lead him to being jailed on the weapons charge... Federal officials had charged Lewis with illegal possession of an unregistered handgun last legally owned by Schenectady Police Officer Eric Vertaramo, who died on Easter Sunday 2004 when his police cruiser crashed into a utility pole on Broadway... It was not immediately clear how Lewis came into possession of the gun, but Carney said Lewis, who was fired as a city police in April, never reported the gun to the city police department, and did not turn it in with his department-issued weapons and badge after he was fired. Hours after a federal judge released Lewis, he allegedly choked the woman, whom he recently wed... Lewis allegedly chased his wife into the street, and continued to beat her despite being seen by several neighbors who called authorities... When police arrived, Lewis had already left, but was found later at his mother's home and taken into custody, police said. The victim declined to file charges but police had enough evidence to charge Lewis with third-degree assault... Lewis allegedly admitted using marijuana and cocaine about the time of the fight with his wife... Lewis is appealing the city's decision in April to fire him following disciplinary hearings prompted by Lewis' six arrests in the past two years, most of them for alleged domestic and drunken driving charges. He has notified the city that he intends to sue to get his job back, contending the city conspired with his former wife to get him fired. Lewis has been out of jail for less than a month after being released from Schoharie County Jail on a $40,000 bail bond for previous charges, including damaging his mother's home in Schenectady and fighting with his brother, who is a city police officer. He also faces a 10-count indictment from December charging him with eavesdropping, stalking, aggravated harassment, computer trespass, and computer and witness tampering. There, he has pleaded not guilty to charges that he used a former girlfriend's computer to hack into his ex-wife's e-mail accounts in late 2008. Lewis also still faces charges for an alleged drunken driving crash in the parking lot of Ellis Hospital in January. Lewis' April dismissal from his job as a police officer was the second time he'd been let go from the department... His more recent firing came as Schenectady Mayor Brian Stratton vowed to rid the department of out-of-control police officers. In May, the mayor said it has cost the cash-strapped city about $1 million in legal fees, salaries and other costs related to officers out on paid disciplinary leave. This year, five city police officers have either resigned or been fired after facing a variety of charges. [Full article here]
[police officer involved domestic violence oidv intimate partner violence (IPV) abuse law enforcement public safety lethal new york state teflon hx repeat state jail hard-headed women]
on 6/13/2010