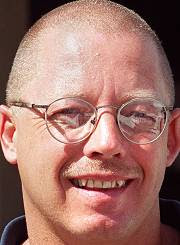 I WENT INTO THE LIBRARY ARCHIVES AND SEARCHED OUT DAYTONA BEACH POLICE UNION REPRESENTATIVE OFFICER JEFF CANDAGE, AND OVER AND OVER HE WAS THERE TO SUPPORT CHARGED AND ACCUSED OFFICERS. HE'S THE MAN!
HE'S TEFLON I'M SURE. WHAT CAN STICK? PROTECTING OFFICERS FROM CHARGES WAS HIS JOB SO IT WILL BE NO SURPRISE TO ANYONE WHEN THESE CHARGES ARE DROPPED. HIS EX-WIFE WILL RECANT, NOT COOPERATE, OR THE D.A. WILL SAY THERE WAS NOT ENOUGH EVIDENCE. (EVEN IF EVERYONE IGNORES HER INJURIES I HOPE THEY ADD HER TO THEIR PRAYERS.)

DETECTIVE JEFF CANDAGE WAS ALSO THE FORMER FLORIDA STATE POLICE OLYMPICS GOLD MEDALIST WHO COULD DEADLIFT AND PLAY WITH 600 LBS WHILE SQUATTING. HE WON HIS WEIGHT CLASS AT THE INTERNATIONAL POLICE OLYMPICS. MAYBE WHAT HE DIDN'T LEARN WAS THE RULES ABOUT NOT POWER-PUSHING (PUNCHING OR KNOCKING OUT) YOUR EX-WIFE WHILE DATING HER TO GET HER BACK.

HE IS ALSO THE POLICE UNION REP WHO STOOD BY DAYTONA BEACH POLICE OFFICER CHRIS REEDER, SAYING A LETTER OF REPRIMAND IN REEDER'S FILE WAS UNJUST AND TOO MUCH. REEDER HAD SAID HIS GIRLFRIEND

CATHRYN "CATHY" MOORE
WAS SUICIDAL AND THAT SHE KILLED HERSELF WITH HIS SERVICE WEAPON WHILE HE WAS IN THE SHOWER. IF SHE WAS SUICIDAL AS HE SAYS THE QUESTION WAS WHY LEAVE YOUR LOADED WEAPON WITH HER? A LETTER WAS TOO MUCH?

FORMER POLICE REP ACCUSED OF HITTING EX
The Daytona Beach News-Journal
Patricio G. Balona
April 12, 2011
[Excerpts] A retired police union representative was arrested over the weekend after being accused of hitting his ex-wife at his Ormond Beach home, police said. Jeff Candage, 56, was charged with misdemeanor battery. He was released on his own recognizance from the Volusia County Branch Jail on Sunday... According to the report, Candage punched the woman in the left side of the head, knocking her to the ground. As the victim got to her feet he hit her again on the right side of the neck. She fell to the ground and blacked out for a minute... The woman hit Candage in the face several times in self-defense and Candage hit her a third time, the report said. The woman then stepped outside and called 9-1-1. The ex-wife had three lumps on her head, a swelling near her right eye. Candage had a red mark on the left side of his face near his eye, the report shows. Candage denied hitting his ex-wife. He told police he only pushed his ex-wife after she punched him... [Full article here]

COP GIVEN WARNING IN GIRLFRIEND'S SUICIDE
The Daytona Beach News-Journal
Lyda Longa
September 22, 2010
[Excerpts] A policeman whose girlfriend killed herself with his service weapon was issued a written warning for leaving his gun unsecured, an internal affairs report shows. Cathryn Moore, 31, shot herself once in the head on Feb. 6 with Officer Chris Reeder's .40-caliber Glock handgun, DAYTONA BEACH POLICE AND THE FLORIDA DEPARTMENT OF LAW ENFORCEMENT SAID... Reeder has been cleared of any criminal wrongdoing in the case, police said... The state concluded Daytona Beach police followed all protocols and death investigation procedures... The union that represents Daytona Beach police officers, however, believes the written warning given to Reeder is too harsh a punishment. Union representative Jeff Candage said he had never heard of any law enforcement officer being reprimanded for leaving his or her weapon unsecured, unless there were children in the officer's home. Candage said Reeder should not have been disciplined at all. "You don't secure a weapon from adults," Candage said. "The discipline (against Reeder) is not just. She (Moore) elected to do that with his weapon while he was preparing to go to work"... Moore's parents -- who live in Delaware -- have hired a Fort Lauderdale attorney to look into their daughter's death... [Full article here]
[police officer involved domestic violence oidv intimate partner violence ipv abuse law enforcement public safety florida teflon state politics]
on 4/12/2011