BE ON THE LOOKOUT FOR ABSCOUNDED, FIRED, WIFE-KILLER, OFFICER HIERS - ANYWHERE IN THE WORLD. $25,000 REWARD. 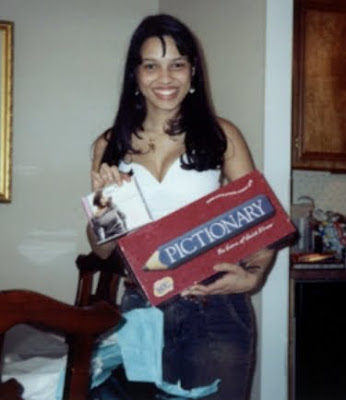 March 15, 2005 Ludimila CoHoe de Hiers was shot in the head as she slept. Her husband Daniel Hiers "resigned" from his cop job shortly before killing Ludimila - due to an investigation being launched into his alleged sexual crimes with a minor. He has been in the top America's most Wanted for too long now... Feds think he had help from "associates" escaping...

"...Daniel Hiers is described as a white male, age 32, 6’03”, 210 pounds with blues eyes and blond hair. He has eleven years of police experience, is trained in the martial arts, and maintains a high level of fitness. He is believed to be armed with a .40 caliber Glock pistol and may possess a bullet-resistant vest. The U.S. Marshals Service is offering a reward for information directly leading to Hiers’ arrest... The Full Story 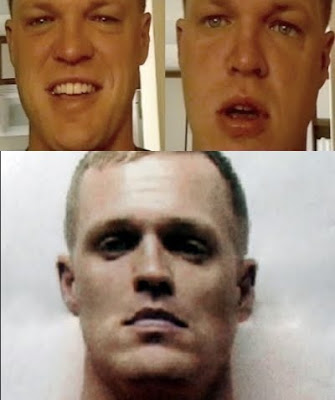 HE COULD WEAR CONTACT LENSES TO CHANGE HIS EYE COLOR AND MAY BE FURRY FACED OR INTENTIONALLY FAT WITH BLACK HAIR OR BALD - BUT I THINK THE FACIAL EXPRESSIONS ABOVE SHOULD BE UNMISTAKEABLE! 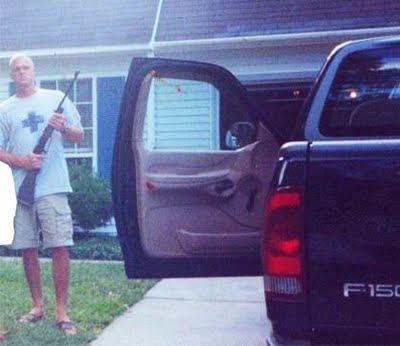 Dan William Hiers Jr. is on the America's Most Wanted's "Dirty Dozen" list and on the United States Marshals Most Wanted List.

REPORT A TIP TO AMERICA'S MOST WANTED HERE OR CALL 1-800-CRIME-TV. Previous entries on Behind The Blue Wall

Thursday, March 24, 2005
Ludimila Hiers found murdered. Officer Hiers flees - ...A week ago she was found dead, shot in the back of the head, and her husband abscounded or ridded of himself some other way...

Thursday, March 23, 2006
US Marshal: Officer Hier's "associates" helped him abscound? - ...In announcing the increased reward, United States Marshal Johnny Mack Brown said, “Our investigation has developed information that Hiers received assistance from associates in the days following the murder of his wife...

Saturday, March 15, 2008
[SC] "Resigned" Officer Hiers still at-large 3 years later - with a little HELP from his FRIENDS - ...As more time passes, it becomes increasingly likely that Hiers has changed identities and is working somewhere or living with someone to help support him... I moved the excerpts from my old notes from news that were here into the comment section...

A murder in Goose Creek
Part 1: Fateful decisions
Goose Greek Gazette
By Jared Goyette
March 12, 2008
...Through the years, Dan seemed to grow distant... At one point in 2001, Mila decided to return to Brazil, but Dan Hiers followed her. He begged and pleaded, cried, promised to change, and she took him back. She was building a life for herself in Goose Creek. She obtained an associates degree, and was enrolled at the College of Charleston, where she studied Spanish. Her plan was to become a Spanish teacher, and open up a language school with her sister, Alessandra, who taught English...

A MURDER IN GOOSE CREEK, PART 2
The Goose Creek Gazette
By Jared Goyette
Published Wednesday, March 19, 2008 2:21 PM
[Excerpts] ...White cop cars surrounded her home. The Goose Creek Police Department was there, and The Charleston Police Department, where Dan had worked as school resource officer for the last two years, had sent one of his supervising officers, a lieutenant. He came to pick up Dan’s equipment, to take back his badge. They don’t let accused pedophiles stay on the force, and that’s what they said Dan was now... and he was running, driving south in his black Ford F150... A woman police officer handed her the phone, and told her to call him. Maybe he would turn himself in... She left message after message, pleading into the voicemail... Then the phone rang, and the caller ID flashed his number... She handed the phone to the woman officer who sat on the sofa... and through his lawyer, Hiers made arrangements to turn himself in the next day... Charleston officers took Dan Hier’s car , sidearm, badge and uniform. Investigators found four other guns, and with Ludimila's permission, took them away for safekeeping. There was one thing missing – a glock handgun. Dan had taken the pistol with him... ..."I never imagined something like this could happen. It never crossed my mind because they were so happy together," Sueli Cohe de Araujo said through a translator... [Link]

A MURDER IN GOOSE CREEK, PART 3
The Goose Creek Gazette
By Jared Goyette
Wednesday, March 26, 2008 11:50 AM
[Excerpts] ...When pedophilia accusations against him first surfaced in November, he had resigned his position with the Charleston Police. At first, he was charged with lewd act on a minor, but the charge he faced in Dorchester was more serious – criminal sexual misconduct with a minor. Dan never turned himself in, and police found Mila's body on Monday afternoon... Dan had mentioned suicide when the charges first surfaced... Hiers was spotted in Walterboro the day of the murder, then disappeared. Three months later, investigators would find his 2005 red Chevy Aveo in Laredo Texas, a border town, but there was no sign of him... [Ludimila's sister] Alessandra asked [Goose Creek Police Detective Karen] Nix to come to Brazil, and she said yes... [Ludimila's mother] Sueli asked her to never give up, and Nix promised she wouldn't...
GOOSE CREEK FUGITIVE AGAIN FEATURED ON TV
The Goose Creek Gazette
Wednesday, February 04, 2009 12:29 PM
[Excerpts] ...America’s Most Wanted has listed Hiers as one of their “Dirty Dozen” and has aired television segments on him 10 times. The U.S. Marshall’s Service is offering a $25,000 reward for information leading to Hiers’ capture. Anyone with information on Dan Hiers Jr. is encouraged to call the United States Marshals Service District of South Carolina at (843)727-4051 or Crime Stoppers at (800)452-1111.
[police officer involved domestic violence oidv intimate partner violence (IPV) abuse law enforcement public safety fatality fatalities murder south carolina state unsolved unresolved fugitive worldwide search reward south carolina abscound bolo]
on 4/12/2011