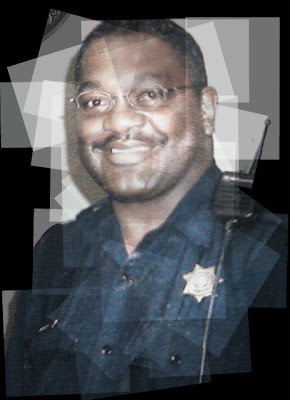 A former sheriff's deputy accused of killing his wife and a day laborer has joined the ranks of "America's Most Wanted" after cutting the leather strap of his electronic monitoring device and fleeing from house arrest...

Anyone with information on Yancey's whereabouts could go to the http://www.amw.com Web site, or call 1-800-CRIME-TV.

News excerpts from April 5th through today, the 10th:

SEARCH FOR FUGITIVE
11Alive.com
Catherine Kim
4/5/2009 10:13:35 PM
[Excerpts] The search for a former DeKalb County sheriff's deputy, turned double murder suspect, is now coast-to-coast and reaching into Canada. Authorities all across the country and along the Canadian border have been notified to be on the lookout for Derrick Yancey. He apparently skipped town Saturday morning, while on home incarceration and awaiting trial for murder. Making an urgent plea for help during a press conference for the public's help, DeKalb County Sheriff Thomas Brown said "sometime, we believe, around 5:30 am, he violated the terms of his in house probation," Deputies say 49-year-old Derrick Yancey has on been on the run since early Saturday morning, "desperate, armed, and dangerous." Yancey, who is charged with the double murder of his wife Linda and day laborer Marcial Puluc, was out on a $150,000 bond and had been under house arrest at his mother's Jonesboro home since August... In an August 2008 interview with 11Alive, Yancey's defense attorney Keith Adams talked about why his client should be released and granted bond. "He is a man who had he wanted to run would have run within the last 2 months, but he has not. He is not a flight risk. He is not a danger to the community. He is innocent"... But Yancey did run and deputies say he is a danger... [Full article here]

FORMER SHERIFF'S DEPUTY ON AMERICA'S MOST WANTED
The Associated Press
By WALTER PUTNAM
Walter Putnam
Apr 7, 5:38 pm ET
[Excerpts] A former sheriff's deputy accused of killing his wife and a day laborer has joined the ranks of "America's Most Wanted" after cutting the leather strap of his electronic monitoring device and fleeing from house arrest. Authorities nationwide were searching Tuesday for Derrick Yancey, four days after he left his mother's home south of Atlanta and got a 12-hour start before police were notified that he was missing... The private monitoring firm BI Inc. of Colorado received an alert on Yancey's bracelet at 5:41 a.m. Saturday but the sheriff's office was not notified for hours... "The leather strap was cut with a pair of scissors or something," the sheriff said. "It doesn't take rocket science to remove the strap. The strap was designed with the idea that the person would not remove it"... [Full article here]

SERIES OF MISTAKES HELPED EX-COP ESCAPE
The Atlanta Journal-Constitution
By APRIL HUNT
Wednesday, April 08, 2009
A string of mishaps — including uncertainty about whom to call, voice mail messages left unanswered for hours and previous false alarms — combined to help double-murder suspect Derrick Yancey remove his ankle monitor and escape house arrest, according to a report issued Wednesday... A DeKalb Superior Court judge, who revoked Yancey's bond on Monday, blasted Pre-Trial Services for "a comedy of errors" that helped him escape... [Full article here]