[GA] "DESPARATE, ARMED, AND DANGEROUS" - Double murder suspect Deputy Yancey has cut off his electronic monitor and is missing 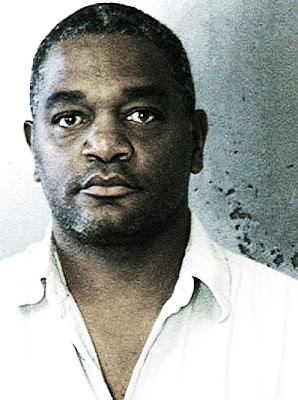 ...The sheriff's office said on Saturday it assumes that Derrick Yancey is desperate, armed and dangerous...“He was on an electronic monitor and was restricted to the house... We received info that he cut the bracelet off and left his residence.”

Somebody tell me WHY anyone suspected of murdering his wife and an uninvolved day laborer would be on house arrest!

FORMER GA. LAWMAN CHARGED IN KILLINGS GOES MISSING
WALB-TV
Associated Press
April 5, 2009 12:54 AM ET
DECATUR, Ga. (AP) - Authorities are hunting for a former DeKalb County sheriff's deputy who is missing while free on bond on charges of killing his wife and a day laborer. The sheriff's office said on Saturday it assumes that Derrick Yancey is desperate, armed and dangerous. The DeKalb County fugitive squad is looking for the 49-year-old suspect. Yancey was indicted in August in the fatal shootings of his wife and a Guatemalan day laborer who he claimed had killed his spouse at their Stone Mountain home. Prosecutors say Yancey fabricated the story about the June 9 shootings. Yancey was released after his August arrest on $150,000 bond and placed under house arrest. The sheriff's office said he was last seen Friday night at his family's home in Jonesboro. [LINK] FORMER DEPUTY AWAITING TRIAL FOR WIFE’S MURDER MISSING
The Atlanta Journal-Constitution
By Marcus K. Garner
Saturday, April 04, 2009
Updated: 12:20 a.m. April 05, 2009
A former DeKalb County Sheriff’s deputy, out on bond as he awaited trial in the deaths of his wife and a day laborer, has gone missing, authorities said Saturday. The sheriff’s office’s fugitive unit is looking for Derrick Yancey... “He was [on] an electronic monitor and was restricted to the house,” [sheriff’s spokeswoman Lt. Billi] Akins said late Saturday night. “We received info that he cut the bracelet off and left his residence.” Yancey was indicted and arrested in August for the June shooting death of his wife Linda, 44, and day laborer Marcial Cax Puluc, 20... The court ruling last August allowing Yancey to be released drew a sharp response at the time from his wife’s siblings. In a statement, lawyer Loletha Denise Hale, who said she spoke for Eugene Thomas and Gloria Thomas Sanders, accused prosecutors of giving Yancey “preferential treatment as a result of his previous employment with the DeKalb County court system”... Akins said Sheriff Thomas Brown is taking Yancey’s disappearance seriously because of the deaths involved. “We’re concerned that he is desperate and may be armed and dangerous,” she said. She said anyone who knowingly harbors or assist him would be prosecuted to the fullest extent of the law. Sheriff’s deputies are asking anyone with information to call the DeKalb’s fugitive squad at 404-298-8200. [Full article here]