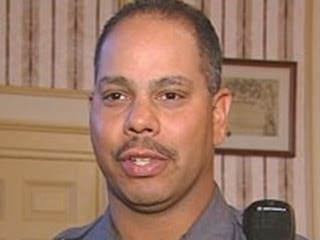 ...[Lancaster city police officer Jose Luis] Diaz, however, again passed the woman, this time while he was driving in reverse... He intentionally collided with the woman's car, causing it to go off the road and up an embankment, police said. The woman's car was towed from the scene...


POLICE SAY OFFICER RAN CAR OFF ROAD
York Daily Record
By Ryan Robinson
The Lancaster Intelligencer Journal
Updated: 10/07/2010
Authorities have charged a Lancaster city police officer with assault for allegedly hitting a woman's car with his own vehicle in Dauphin County, forcing her off the road and into an embankment, authorities said. Jose Luis Diaz, 41, who was off-duty at the time of the alleged incident on Wednesday at 12:23 a.m., was charged with domestic simple assault and reckless endangerment... Diaz, of Millersville, was following the woman, whom police did not identify, on Fishing Creek Valley Road in Middle Paxton Township when he passed her car and cut in front of her, trying to get her to stop... The woman, also of Millersville, turned around and drove in the opposite direction... Diaz, however, again passed the woman, this time while he was driving in reverse... He intentionally collided with the woman's car, causing it to go off the road and up an embankment, police said. The woman's car was towed from the scene... A department official could not comment on whether Diaz will continue to be paid while he is on leave... For the past several years, Diaz has served as the school resource officer at Hand Middle School. [Full article here]

OFF-DUTY OFFICER ARRESTED FOR ASSAULT, ENDANGERMENT
abc27.com
Posted: Oct 06, 2010
Updated: Oct 07, 2010
[Excerpts]A Lancaster City police officer is facing charges he rammed a woman's car off the road in Dauphin County. Jose Diaz was off-duty when he was arrested early Wednesday. Investigators said it was a case of domestic violence, and could have been a deadly one... Diaz, 41, of Millersville, was charged with simple assault and reckless endangerment. Investigators said he was driving on Fishing Creek Valley Road in Middle Paxton Township when he cut in front of a female driver, trying to get her to stop. She turned around and tried to drive away, but that's when said Diaz drove in reverse and rammed her car... Both vehicles ended up off the road on an embankment... "It could have caused serious bodily injury or even death," [state police spokesman Trooper Tom] Pinkerton said... Diaz has been placed on administrative leave... Diaz was released on $10,000 unsecured bail. If he's convicted of a misdemeanor domestic violence offense, he would likely have to comply with the Lautenberg Act, legislation that makes it illegal for offenders to own or operate firearms, which could potentially put Diaz's job in jeopardy. [Full article here]
[police officer involved domestic violence oidv intimate partner violence (IPV) abuse law enforcement public safety lethal pennsylvania state]
on 10/07/2010