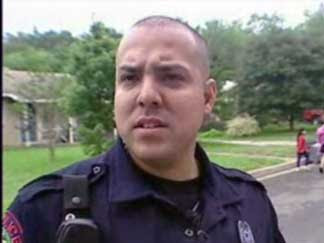 
QUINTANA FIRED SECOND TIME AFTER DOMESTIC VIOLENCE ALLEGATIONS
KVUE News
By Jim Bergamo
October October 28, 2010
[Excerpts] Austin Police Chief Art Acevedo fired Officer Leonardo Quintana for the second time in five months. During an internal hearing Wednesday afternoon, Acevedo made an administrative finding that Quintana committed assault and criminal trespass in October, 2009. “I will not apologize to anybody who thinks we should let bygones be bygones. That is not our job; our job is to investigate, gather evidence, and we believe the evidence will show Quintana should not be a member of this police department,” said Chief Acevedo. The October incident involved Quintana’s former fianceé and fellow police officer Lori Noriega...mAn arbitrator ruled last week that Quintana should be reinstated to the police force after being fired in May for a DWI arrest. In September, Quintana appealed his firing during a civil hearing. At the time, Quintana said he was drinking more and more after the death of teenager Nathaniel Sanders. “I was having a hard time sleeping and nightmares. I was pretty much drinking to self medicate,” said Quintana in September. Now that Quintana has lost his badge for the second time, his attorney says he will appeal and challenge Acevedo’s decision... [Full article here]


QUINTANA'S JOB ON THE LINE AGAIN ON DOMESTIC VIOLENCE ALLEGATIONS
KVUE
October 27, 2010
[Excerpts] Austin police officer Leonardo Quintana may be out of a job again in a few hours, after another disciplinary hearing. Quintana was just re-instated to the force less than a week ago after being dismissed because of a drunk driving incident. Soon after, he received a letter informing him of Chief Art Acevedo's intentions to suspend him indefinitely. This time, it is connected to an alleged domestic violence incident involving his ex-fiancee... This is all unrelated to Quintana's fatal shooting of Nathaniel Sanders in May of last year. Quintana was never criminally charged in that shooting. [Full article here]

QUINTANA'S FORMER FIANCEE TOLD POLICE THAT CONFRONTATION HAD BEEN VERBAL: Fired police officer, reinstated last week, faces possible termination today.
American-Statesman
By Tony Plohetski
Oct. 26, 2010
[Excerpts] The former fiancée of Austin police officer Leonardo Quintana, who faces possible dismissal after an alleged domestic violence incident, told officers that day that the couple had fought only verbally, a police report obtained Tuesday said. Leander police wrote that the Oct. 10, 2009, call at the home of Austin officer Lori Noriega, Quintana's longtime girlfriend, "was cleared (as) a verbal disturbance where parties were already separated." An officer wrote that Noriega "stated she was not injured and that this was just a verbal disturbance." An attorney representing Quintana, whose fatal shooting of Nathaniel Sanders II outside an East Austin apartment complex prompted unrest last year, has said that a police internal affairs investigation concluded Quintana assaulted Noriega... Noriega attorney Jannice Joseph said Tuesday that Noriega was not investigated "that I am aware of" for not notifying her supervisors... Quintana was reinstated to the department last week after he was fired in May — a year after the Sanders shooting — for a drunken driving arrest in January. Last year, he was suspended for 15 days for not activating his patrol car camera during the shooting, but Acevedo found that he did not violate departmental policies concerning his tactics and use of deadly force. Quintana also was suspended for 15 days in 2006 after a memo said he burst into Noriega's home to retrieve cruise tickets. Acevedo later reduced that suspension to a written reprimand. According to her disciplinary file, Noriega was suspended for 10 days in 2006 for making harassing phone calls to a person who was not named and for not giving "an accurate accounting" of an off-duty incident she was involved in... [Full article here]

AUSTIN POLICE OFFICER QUINTANA MAY LOSE JOB FOR THE 2ND TIME
weareaustin.com
Tuesday, October 26 2010
[Excerpts] After getting his job back last week Austin Police Officer Leonardo Quintana is facing another disciplinary hearing Wednesday which could end with him being terminated from the department yet again... Quintana fought the indefinite suspension with an appeal hearing last month saying he had gone to counseling and hadn’t had a drop of alcohol since the arrest. The indefinite suspension was reduced to 15 days by an arbitrator This time Quintana’s hearing is about a new investigation into a 2006 domestic dispute incident with his former fiancée who is also a fellow APD officer. Quintana was suspended for 15 days for the dispute but the punishment was reduced to a written reprimand... New evidence is expected to be revealed at the hearing which could end with Quintana being suspended or terminated as an Austin police officer... [Full article here]


OFFICER QUINTANA'S JOB IN JEOPARDY
kvue.com
by JENNIE HUERTA, KVUE
October 26, 2010 at 4:20 PM
[Excerpts] The Austin police officer involved in a fatal shooting could be fired, less than a week after he was reinstated. Leonardo Quintana faces a disciplinary hearing Wednesday afternoon for a domestic incident last October with his ex-fiance, also an APD officer. Quintana received a letter that APD plans to suspend him indefinitely - the civil service equivalent of firing him... Quitana shot and killed 19-year-old Nathaniel Sanders in May 2009. Chief Art Acevedo says he is prohibited by law from confirming the investigation or commenting on the domestic abuse allegations... [Full article here] 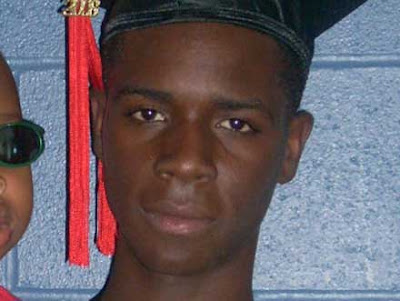 
AUSTIN'S TOP COP PROMISES TO 'DISSECT' OFFICER SHOOTING OF SUSPECT
CBS 42 Reporter: Jason Wheeler
Last Update: 5/12 11:52 am
[Excerpts] Police believe 18-year-old Nathaniel Sanders, who was shot to death by an Austin police officer early Monday morning, had links to several recent violent crimes in Austin... Until this latest inquiry is done, Senior Officer [Leonardo] Quintana will be on administrative leave. He is an eight year veteran of the department, with exemplary reviews, multiple commendations, and even an employee of the year finalist last year. The one blemish was a 15 day suspension in 2006 for criminally trespassing into his girlfriend's apartment. [Full article here]


OFFICER IN SHOOTING HAD '06 SUSPENSION REDUCED: Funeral date set for man who was killed this week.
American-Statesman
By Tony Plohetski
Thursday, May 14, 2009
[Excerpts] An Austin police officer who fatally shot a man [Nathaniel Sanders] and wounded another [Sir Lawrence Smith] this week had a 15-day suspension that he served in 2006 reduced to a written reprimand by Police Chief Art Acevedo last year... Acevedo offered to reduce the suspension involving officer Leonardo Quintana in January 2008, days before an appeal hearing... The agreement also said that Quintana would be reimbursed the money he lost during the suspension... Quintana had been suspended after he burst into the home of his girlfriend, also an Austin police officer, without her permission after a fight to retrieve tickets for a cruise, a disciplinary memo said. The memo said his actions constituted a criminal trespass. City officials said they did not release the agreement Monday - when they released Quintana's personnel file - because the document had been filed incorrectly. Quintana remained on administrative leave Wednesday in the shooting death of 18-year-old Nathaniel Sanders II... [Full article here]


OFFICER IN SHOOTING HAD STRONG RECORD, DESPITE 2006 SUSPENSION: Leonardo Quintana was an police employee of the year finalist in 2008.
American-Statesman
By Patrick George
Tuesday, May 12, 2009
[Excerpts] Despite a suspension in 2006, the officer who shot and killed a man in East Austin early Monday morning was highly decorated in the Austin Police Department, according to his personnel file. A City of Austin memorandum states that officer Leonardo Quintana was suspended for 15 days in August 2006 after a fight with his girlfriend, another Austin police officer. The memo says that on April 28, 2006, Quintana burst into the home of officer Lori Noriega without her permission in order to retrieve tickets for a cruise. His actions constituted criminal trespass, the memo says. Austin police officials said Quintana has received a number of commendations during his 81/2-year career, including a superior service citation, the Commanders' Recognition award in 2007 and the CMT Campaign Ribbon for his service in the department's riot control unit. He was an employee of the year finalist in 2008 and was named the 100 Club of Central Texas Officer of the Year in 2003. Based on personnel records obtained by the American-Statesman, Quintana consistently achieved high marks during his annual performance evaluations. In prior evaluations, his supervisor, Sgt. Erin Zumwalt, described Quintana as "the hardest working officer on the shift" and "an asset to the department." According to a public records search, Quintana has no criminal record. During the award ceremony for the 100 Club citation, Quintana was called "a police officer's officer," which then-Chief Stan Knee said was "most appropriate," according to his file. An evaluation from early in his career said Quintana is "extremely motivated ... for a very young officer (and) shows a real knack for police work. He is always at the right place at the right time"... [Full article here]

APD INVESTIGATING WHY ONLY ONE CAMERA ACTIVATED DURING OFFICER-INVOLVED SHOOTING
KVUE
By Jessica Vess
Wednesday, May 13, 2009
New details have emerged in the fatal shooting of Nathaniel Sanders, 18, Monday morning at the Walnut Creek Apartments in Central East Austin. Austin police say only one camera out of three patrol car dashboard cameras was on and recording when Senior APD Officer Leonardo Quintana shot and killed Sanders... Detectives are investigating why departmental policies weren't followed... According to APD policy, when the lights and sirens of a patrol car are activated, the dashboard camera automatically turns on as well... [Full article here]

FATHER: THE SHOOTING WAS "NEGLIGENT: Chief is 'confident' that officer acted legally
KXAN
Monday, 11 May 2009
[Excerpts] ...According to Austin's Office of the Police Monitor, Quintana was suspended in 2006 after a dispute with his then-girlfriend, Officer Lori Noriega, a fellow officer who was also suspended in connection with the incident. According to affidavits , Quintana was trying to retrieve some cruise tickets from her house that he had bought, and she wouldn't let him in. So he shoved his way inside, got the tickets, and left, the documents say. He was suspended. Noriega was also suspended because, according to the affidavits, she had not been truthful about the incident and had also made "harassing" phone calls to another person... [Full article here]