[WV] Ex St. Albans Officer Chapman gets 7 months instead of 10 years for his repeated domestic stalking, and gun crimes 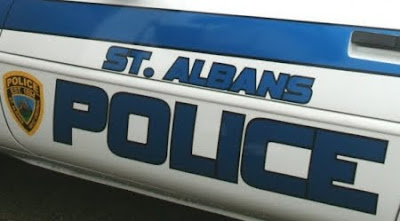 A former St. Albans police officer [Ronald Mark Chapman] faces 10 years in prison... [Assistant U.S. Attorney Lisa Johnston] asked [U.S. District Judge Robert C.] Chambers to impose a sentence within the range recommended by the federal guidelines. "I know he's a law enforcement officer, but he's not above the law," she said. Chambers said he didn't see any additional benefit to incarcerating Chapman for an additional period, and gave him a vastly reduced sentence...

FORMER POLICE OFFICER FACING 10 YEARS IN PRISON
58wchs.com
Oct 1, 2010
[Excerpts] A former St. Albans police officer faces 10 years in prison on a federal gun charge after admitting to stalking his ex girlfriend. Police say Ronald Mark Chapman, 44, had three handguns, three shotguns and hundreds of rounds of ammunition last December. At the time, Chapman was under a domestic violence protective order, which banned him from owning firearms. Police say after Chapman's long-time girlfriend broke up with him in October of last year, Chapman began stalking her... St. Albans Police Chief Joe Crawford told Chapman to stay away from his ex. Only a few days later, Chapman's ex saw him looking into her bedroom window. That prompted Chapman's ex to get a domestic violence protection order. The order banned Chapman from owning firearms. Chapman was then forced to resign from the St. Albans Police Department. Less than two months later police arrested Chapman and charged him with wanton endangerment after an incident where Chapman allegedly shot at a neighbor's house... Chapman put a gun to his head saying he would kill himself. His ex-wife, with whom he had been living, tried to get the gun away from him. Chapman then took the gun and shot twice into the wall. Chapman then got a shotgun from his closet. His ex-wife again tried to take the gun from him, but was unsuccessful. When Chapman picked up a .38 revolver, his ex-wife fled... At his home they found the six guns and 900 rounds of ammunition. Sentencing is set for 1:30 pm Monday in Huntington Federal Court. [Full article here]