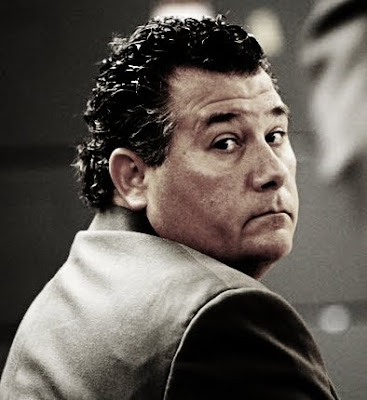 ...A few minutes before the hearing in [Milwaukee police officer Mark] Lelinski's case, [Assistant Family Court Commissioner Dean B.] Zemel quickly granted an injunction to a different woman, who said her ex-boyfriend had shoved her and threatened to kill her. The woman accusing Lelinski asked Zemel to explain why the other woman got an injunction but she did not. Zemel said there were differences, but declined to explain them...

Previous post on Mark Lelinski:
[WI] Officer Mark Lelinski (brother of convicted Officer Steven Lelinski) arrested a third time for domestic violence - ...The document said [Milwaukee Police Officer Mark Lelinski] threw her around, leaving bruises on her body and threatened to kill her... The woman also accused Lelinski of coming home drunk earlier this month and urinating on their sleeping baby... Online court documents show Lelinski's wife has taken out a temporary restraining order against him... Lelinski has been arrested on domestic violence allegations before, in 1999 and 2007...

Previous post about his brother Steven Lelinski:
[WI] Police Standards Officer Steven Lelinski accused of attacking woman he was "pursuing"
WOMAN DENIED PROTECTION FROM OFFICER: Court official not convinced of her allegations of abuse
The Journal Sentinel
By Gina Barton
Oct. 1, 2010
[Excerpts] A court official on Friday refused to grant an injunction to protect a woman who said Milwaukee police officer Mark T. Lelinski threw her around and threatened to kill her. The woman showed bruises on her arms to Assistant Family Court Commissioner Dean B. Zemel and said Lelinski caused them Sept. 15. Lelinski woke her up in the middle of the night, threw her around the bed and accused her of stealing money, the woman said. "He's a danger to myself and my child, and he's a danger to society," she said. "I believe this man needs help." Zemel told the woman "throwing you around is subjective" and said he couldn't say for sure the bruises were a result of abuse by Lelinski. "I cannot find that there has been domestic abuse and grant the injunction," he said. A few minutes before the hearing in Lelinski's case, Zemel quickly granted an injunction to a different woman, who said her ex-boyfriend had shoved her and threatened to kill her. The woman accusing Lelinski asked Zemel to explain why the other woman got an injunction but she did not. Zemel said there were differences, but declined to explain them... While court officials have discretion in whether to grant protective orders, they must give legitimate reasons for their decisions, said Tony Gibart, policy coordinator for the Wisconsin Coalition Against Domestic Violence. "The fact that this commissioner would not state the reason for the denial strongly suggests the reason was not legitimate," Gibart said. The woman called 911 after the Sept. 15 incident. During the hearing, she testified that the responding officers did not take her seriously and one of them told Lelinski: "My wife is a psycho, too"... The district attorney's office is reviewing the case for possible charges against Lelinski, who is on administrative duty pending a decision on charges. He testified during Friday's hearing that the woman was lying... "I'm a kind and gentle person." The woman plans to appeal Zemel's decision. Lelinski, assigned to District 3, has been arrested on domestic violence allegations before, in 1999 and 2007, after incidents involving a different woman... He was not charged in either incident... [Full article here]

EARLIER THIS YEAR ANOTHER WOMAN, SARAH ROSIO, WAS KILLED A MONTH AFTER ASSISTANT COMMISSIONER DEAN ZEMEL DENIED HER REQUEST FOR AN EXTENDED RESTRAINING ORDER:

WAUWATOSA MAN CHARGED IN KILLING OF EX-GIRLFRIEND
The Journal Sentinel
By Tom Kertscher
Jan. 25, 2010
[Excerpts] Wauwatosa — A man being sought by police confessed that he killed the mother of his young daughter - perhaps in front of the toddler - and then drove around with the woman's body in his car for four days, according to court documents released Monday. As the search for Benjamin M. Germano entered its fifth day, the 32-year-old Wauwatosa resident was charged Monday with first-degree intentional homicide in the death of Sarah Rosio. The body of the 24-year-old Milwaukee woman wasn't found until last Thursday, in a storage unit... Germano told one of the friends that he strangled Rosio, which is similar to a felony charge he faced in 2008... Allegations of strangulation were made in at least one of the domestic violence cases brought against Germano. Online court records show that... The most recent series of legal actions started with the disorderly conduct incident Dec. 12. Two days later, a person who is not identified in the court records obtained a two-week domestic abuse restraining order against Germano. On Dec. 16, Germano was charged with misdemeanor disorderly conduct in connection with the Dec. 12 incident. He was ordered by a judge to have no contact with "Sarah R." On Dec. 28, the person who obtained the restraining order requested an injunction that would extend the order. The request was denied by Milwaukee County Family Court Commissioner Dean Zemel. Last Wednesday, Germano appeared in court and was appointed a county-paid attorney for the disorderly conduct case. The next night, Rosio's body was found... [Full article here]

SarahRosio.org
[Email Joe Burton]
A charity to support victims of domestic violence resulting in death. The motivation for our participation in this effort stems from the death of Sarah Rosio. Sarah was a twenty-four year old young lady that came to an untimely domestic violence related death on January 13, 2010. Sarah is survived by a beautiful minor daughter Claire. The tragic and violent death of our beloved Sarah has left our family devastated and with great concern for the future well being of her beautiful 20 month-old daughter Claire.