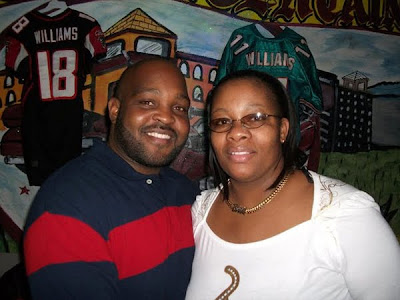 ...Rhonda Williams leaves behind three children. She had worked as a correctional officer at the South Florida Reception Center in Doral, an all-male prison, for six years... Warden David Harris, of the South Florida Reception Center, released the following statement Tuesday. "Employees are heartsick over the death of Officer Rhonda Mickens Williams. No matter the situation, Rhonda always had a smile on her face, and her concern for others made her one of our most popular and respected correctional officers"...


CORRECTIONS OFFICER'S HUSBAND ARRESTED FOR HER MURDER
Husband confesses to brutal stabbing death in Overtown
By SHARON LAWSON
Updated 12:58 PM EDT, Wed, Oct 6, 2010
[Excerpts] The husband of a state corrections officer who was the victim of a brutal stabbing has been charged with her murder after confessing to the heinous crime, police said. Miami Police said 31-year-old Jabcol Williams admitted to stabbing wife Rhonda Mickens-Williams, 36, hours after her body was found... After at first denying involvement in the murder for several hours, police say Williams finally admitted to [killing her]... Police said they'd visited the home in the past for domestic violence issues. Williams has been charged with second-degree murder. He was denied bond during a court appearance Wednesday. Mickens-Williams leaves behind three children. [Full article here]

MAN ACCUSED OF FATALLY STABBING WIFE DENIED BOND
MIAMI (CBS4) --
Oct 6, 2010 12:53 pm US/Eastern
[Excerpts] ...His relatives were at the hearing and expressed support for Jabcol Williams. "They all need to tell the truth," said Williams' sister who stopped short of saying he was innocent. Miami police said Mickens-Williams told detectives he and his 18-year-old son were home at the time of the stabbing. However he initially denied having any involvement in it. During questioning police said he eventually confessed to beating, stabbing, and cutting her... Relatives said Mickens-Williams, the mother of three sons, worked at the South Florida Reception Center in Doral. Warden David Harris, South Florida Reception Center, issued this statement: "Employees are heartsick over the death of Officer Rhonda Mickens-Williams. No matter the situation, Rhonda always had a smile on her face and her concern for others made her one of our most popular and respected Correctional Officers at South Florida Reception Center"... [Full article here]

MIAMI-DADE CORRECTIONS OFFICER FOUND DEAD
husband charged
The Miami Herald
By Israel Gutierrez and Jennifer Lebovich
October 05, 2010
[Excerpts] ...The victim's husband of nine months, Jabcol Williams, 31, has been charged in the homicide, police officials said. The body of Rhonda Mickens-Williams was found about 8:30 a.m. on the side yard of her home... Someone in the home had called 911; police arrived to find Williams and his wife's 18-year-old son at the scene. "Officers described the murder scene as very gruesome," said Miami police spokeswoman Kenia Reyes. Mickens-Williams had obviously put up a fight against her attacker. Some relatives and neighbors who gathered outside the family home had quickly pointed the finger at Williams; others said the couple, who married on New Year's Eve 2009, had a happy union. Others wondered if because her job, Mickens-Williams had been targeted... The mother of three sons was a popular corrections officer at the South Florida Reception Center in Doral; her job was to transport inmates. "She was a very kind-hearted person," said Mary Troupe, a former sister-in-law. "She loved her boys. That's all she talked about - her boys"... [Full article here]

SLAIN CORRECTIONS OFFICER'S HUSBAND CHARGED WITH MURDER: Miami Police Say He Killed His Wife Then Called Police
POSTED: Tuesday, October 5, 2010
UPDATED: October 6, 2010
[Excerpts] Relatives gathered outside her home, praying together on the sidewalk.
"I could describe them (as) a beautiful couple," said Hanna Brooks, a relative of the victim. "Every time you'd see them, they were together, laughing, having fun. I just don't know what could have happened." Police said Jabcol Williams initially denied any involvement in the murder. However, after hours of interviews, detectives said he went into great detail about how he stabbed his wife... Rhonda Williams leaves behind three children. She had worked as a correctional officer at the South Florida Reception Center in Doral, an all-male prison, for six years... [Full article here] 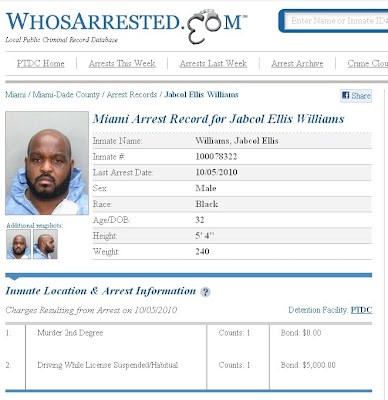 FLORIDA CORRECTIONS OFFICER ACCUSED OF FATALLY STABBING WIFE, ALSO A CO
By CBS4
October 6, 2010
[Excerpts] Thirty-one-year old Jabcol E. Williams was arrested and charged with second-degree murder for the death of his wife, Rhonda, who was also a corrections worker. The husband of a Florida Department of Corrections officer charged with her murder faced a bond court judge Wednesday who denied him bond... Jabcol Williams, 31, has been charged with second degree murder in her death. His relatives were at the hearing and expressed support for Jabcol Williams. "They all need to tell the truth," said Williams' sister who stopped short of saying he was innocent... Relatives said Mickens-Williams, the mother of three sons, worked at the South Florida Reception Center in Doral... [Full article here]

["It is with a heavy heart..."]
DOMESTIC VIOLENCE AWARENESS MONTH
The Florida Department of Corrections (DC)
10/08/10

It is with a heavy heart that I write this week’s Secretary’s Message. I was hoping to talk about all the events and activities we have planned statewide to bring attention to October being Domestic Violence Awareness Month. Instead, we heard the sad news that on Tuesday one of our Correctional Officers, Rhonda Mickens-Williams, was stabbed to death and that her husband has been charged with her murder. Rhonda worked at South Florida Reception Center, and by all accounts she was a joy to be around, a mentor to others, and a dedicated transport officer. SFRC Warden Harris said that no matter what the situation, “Rhonda always had a smile on her face and her concern for others made her one of the most popular and respected Correctional Officers at South Florida Reception Center.” She leaves behind three sons.

It is heartbreaking to think how this traumatic event will impact her family, particularly her children. Our thoughts and prayers are with them, and with her co-workers, who are still trying to absorb what happened. We must do all we can to break the cycle of abuse that is at the heart of what Domestic Violence Awareness month is highlighting. I am so proud of how our institutions and community corrections facilities have stepped up to the challenge and planned presentations and events to assist in this effort. We know more than most how prevalent and insidious the scourge of domestic violence is through our work with inmates and offenders, and our contact with their families. Unfortunately, sometimes we also know it through our own experiences with co-workers and family members. Thank you for getting involved, and for meeting this problem head-on. In addition, here in Central Office the Office of Health Services is organizing donations of clothing, toiletries and money to the Good Samaritan Network's Tallahassee Chelsea House. They provide physical as well as emotional and spiritual support while their clients work towards re-entry into the community. We are also collecting items and donations for a local women's shelter, Refuge House.

Every region is also contributing to the Domestic Violence Awareness cause this month, doing everything from collecting cell phones and toiletries for battered women shelters to sponsoring fundraising luncheons to arranging presentations to better educate ourselves about the disease of domestic violence. Click here to see some of the many Domestic Violence Awareness events scheduled this month in your regions.