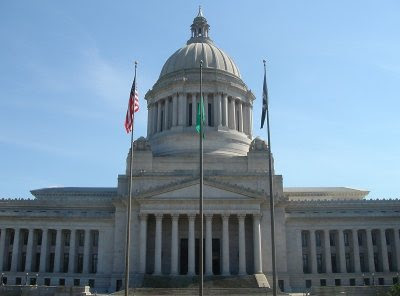 ...House Bill 2392 and its twin, Senate Bill 6161, would require law enforcement agencies to adopt a model statewide policy or an individual policy for responding to allegations of domestic violence by their employees... "It is definitely a pioneering effort. No other state has adopted statewide minimum standards"...

DOMESTIC ABUSE GETS ATTENTION OF LAWMAKERS LAW ENFORCERS' TRAINING, VICTIM PROTECTION AT ISSUE
Seattle Post-Intelligencer (WA)
Jennifer Lloyd
February 23, 2004
[Excerpts] Bills dealing with domestic violence - including measures spurred by the murder-suicide involving Tacoma police Chief David Brame - are moving through the Legislature. The Senate endorsed two bills focusing on domestic-violence issues, while the House passed seven bills. Two companion measures stemming from Brame's fatal shooting in April of his wife, Crystal, are top priorities. House Bill 2392 and its twin, Senate Bill 6161, would require law enforcement agencies to adopt a model statewide policy or an individual policy for responding to allegations of domestic violence by their employees. The Washington Association of Sheriffs and Police Chiefs, along with representatives from law enforcement agencies and victims' rights organizations, would develop the model policy by Dec. 1. Agencies would have to adopt procedures by June 1, 2005, and train every employee on the domestic-violence protocol by June 30, 2006. The bills' sponsors, Rep. Pat Lantz, D-Gig Harbor, and Sen. Debbie Regala, D-Tacoma, represent districts at the epicenter of the Brame tragedy. "For me, there has been a degree of satisfaction that I took action and a positive step to make amends for what happened in the parking lot of my grocery store last April," said Lantz, a member of the state's Task Force on Officer-Involved Domestic Violence. "It is definitely a pioneering effort. No other state has adopted statewide minimum standards." On Thursday, the House Committee for Juvenile Justice and Family Law heard testimony on the Senate bill, a result of concern over the Brame incident. According to testimony Thursday, law enforcement agencies should have a clear policy for handling domestic-violence allegations against officers so that victims know what to expect during a police investigation. "In my case it was two whole months before they contacted me. That's a whole lot of time to wonder if they're investigating it, how they're investigating it, without talking to me," Heidi Collins testified. Her husband, an officer with an Eastside department, was charged last July with assaulting her. He returned to work in January after receiving a "stipulated order of continuance," not a guilty verdict, for a fourth-degree assault charge in King County District Court. He must undergo domestic-violence treatment. "This bill will eliminate a lot of the stress that comes from not knowing what is going to happen next, when or if anything is going to happen at all," Collins said... Both bills unanimously passed their houses of origin... [Full article here]
on 2/23/2004 0 comments

WASHOE DEPUTY WILLIAMSON ARRESTED FOR DV
KRNV News 4 Local News
February 11, 2004
A Washoe County sheriff's deputy is in jail charged with domestic battery. 31-year-old Brian Williamson was arrested Tuesday afternoon at his Sparks home. He is charged with two counts of domestic battery against his wife. Williamson, an eight year veteran of the force, is on administrative leave pending the outcome of the criminal investigation by sparks police. The sheriff's department will also launch internal investigation. Williamson is currently in custody at the Washoe county jail on $20,000 bail.

DEPUTY SUSPECTED IN DOMESTIC BATTERY
Reno Gazette-Journal (NV)
Wednesday - Feb 11, 2004
A Washoe County sheriff's deputy was placed on administrative leave Tuesday after Sparks police arrested him on two counts of suspicion of domestic battery. Deputy Brian Williamson, 31, an eight-year deputy who works in detention, was booked into Washoe County Jail and held on $20,000 bail after the 4:30 p.m. arrest. Sparks police answered a 911 call Sunday about 3:15 p.m. that came from Williamson's home or a neighbor, Lt. Steve Keefer said. Williamson is accused of pulling his wife's hair, slapping her across the face and punching her in the back, Keefer said. Officers also found old bruises on her, he said. The sheriff's office also will investigate, said Deputy Michelle Youngs, department spokeswoman.
on 2/11/2004 0 comments

Judge in Brame suit was investigated for alleged abuse 1992: State looked into matter, did not charge Armijo
The News Tribune
Karen Hucks
February 6, 2004
[Excerpts] The judge hearing the Crystal Brame lawsuit was investigated in 1992 for allegedly hitting his teenage daughter because she didn't want to let him put a cream above her lip to remove facial hair. Pierce County Superior Court Judge Sergio Armijo was never charged with a crime, but Child Protective Services looked into the matter. Its report surfaced this week, raising questions of whether Armijo had any conflict of interest in hearing the lawsuit, which includes allegations of domestic violence... According to the CPS report, written May 5, 1992, Armijo's 14-year-old daughter said that the night before, her father had wanted to take facial hair off her upper lip, and she didn't want him to do it. He made her lie on the bed so he could apply the cream. When she wiggled, he got angry, pulled her hair and hit her on the leg with a belt, the report says. The girl's mother had intervened, telling Armijo he was abusive, and he went outside to cool down, the report says. Investigators said the girl had two bruises consistent with her account. The report also said the girl reported that normal discipline in the household was corporal punishment. She said her father had "beaten up" her brother once; the boy told investigators that was true, but that it had happened only once, three years earlier. Pierce County prosecutors reviewed the CPS report and decided not to file felony charges against Armijo, then an appointed Tacoma Municipal Court judge running for election. The report was passed to Tacoma city misdemeanor attorneys, who forwarded it to Thurston County attorneys. They decided not to file charges. Kathy Spears, a spokeswoman for the Department of Social and Health Services, declined to comment... The family of Tacoma Police Chief David Brame's wife has sued the city, accusing officials of giving him too much power, ignoring allegations of domestic violence and not noticing his emotional disintegration. Brame fatally shot his wife and himself April 26. Five other judges had declined to hear the case. Judicial canons tell judges to disqualify themselves from proceedings if their impartiality might reasonably be questioned. Attorneys not involved in the case said they'd want to know if a judge presiding over a domestic violence case had been accused of hurting a family member. "I guess for me, it's not automatic disqualification, but I would want to know more," said deputy prosecutor Cort O'Connor, who runs Pierce County's misdemeanor domestic violence unit... [Full article here]
on 2/06/2004 1 comments