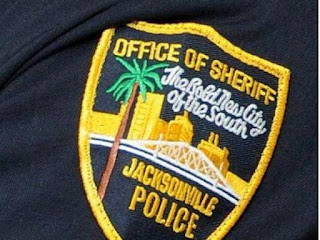 “It’s unacceptable for anyone to perpetuate domestic violence. And it is not acceptable that anyone has to live or be forced to live in that kind of environment... The Jacksonville Sheriff's Office stepped up, arrested him, and he'll be held accountable administratively, as well as criminally, for those charges”
~ Jacksonville Sheriff’s Office Director Mike Bruno

10TH SHERIFF’S OFFICE EMPLOYEE IS ARRESTED THIS YEAR, CHARGED WITH DOMESTIC VIOLENCE
Posted November 10, 2017
[Excerpts] A 20-year veteran of the Jacksonville Sheriff’s Office has been arrested after accusations that he bit his wife... Patrol officer Lenell Boyer, 51, was charged with domestic battery and is being reassigned to a desk job while his case plays out... “We all know that police officers are trained to protect this community. We’re also trained in deescalation techniques. And it’s sad in a situation like this where we fail to protect the community as far as the individual officer’s position and what he did,” [Sheriff’s Office Director Mike] Bruno said... “It’s unacceptable for anyone to perpetuate domestic violence. And it is not acceptable that anyone has to live or be forced to live in that kind of environment.” In 2010 Boyer was disciplined internally for DUI and unbecoming conduct, although the Florida Highway Patrol only gave him a careless-driving ticket. He had struck a dump truck on the interstate and had a blood-alcohol content of 0.12 percent, according to Times-Union archives. He was suspended for 20 days. Over the years there have been about three dozen complaints filed against Boyer, four of them within the Sheriff’s Office and the remainder from citizens... Boyer received formal counseling, written reprimands and had letters sent or referred to be sent as a result of most of the complaints. Boyer was exonerated or the complaint was withdrawn or not sustained in nine of those complaints, records show. [Full article here]

JSO: OFFICER ARRESTED AFTER BITING WIFE'S HAND DURING ARGUMENT - 20-year veteran charged with misdemeanor domestic battery
November 10, 2017
[Excerpts] A 20-year veteran of the Jacksonville Sheriff's Office has been charged with domestic battery after police said he bit his wife's hand Thursday... Director Mike Bruno said Officer Lenell Boyer, 51, got into an argument with his wife, and she put her hand over his mouth because he was getting loud and cursing, and she didn't want him to wake their sleeping children... “The Jacksonville Sheriff's Office stepped up, arrested him, and he'll be held accountable administratively, as well as criminally, for those charges"... A 2010 report said Boyer hit a dump truck on the interstate, left the scene and urinated in the back of a patrol car. The trooper didn’t conduct a field sobriety test and sent Boyer home with a ticket. He later had a blood alcohol level of 0.12 when a JSO supervisor made him take a breath test... The criminal investigation into Boyer's domestic battery charges will be conducted by the State Attorney's Office, and after that is complete, the administrative investigation will begin... “One arrest is too many, but with that being said, it's reassuring that when there is an issue, and it's brought to our attention, it's addressed appropriately, and if that's through an arrest, then that's what should happen,” Bruno said. “The reality of it is, no officer wants someone else tarnishing the badge. The officers want to do it right, and they expect others to do it right, and when they do it wrong, they understand there's a measure in place to address those.” [Full article here]
[police officer involved domestic violence oidv intimate partner violence ipv abuse law enforcement public safety repeat repeated hx florida state politics]
on 11/13/2017 0 comments