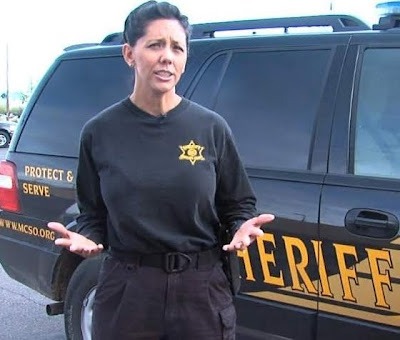 ...The neighbor also reported [Maricopa County Sheriff’s Deputy] David Moyer warned him, "Go back inside your apartment and mind your business. I'm a cop"...
PD: MCSO DEPUTY DEBORAH MOYER ARRESTED FOR ASSAULTING HUSBAND
ABC15.com
By: Dave Biscobing, Erisa Nakano
Posted: 05/09/2011
[Excerpts] A Maricopa County Sheriff’s deputy who was profiled on a national television series last year has been arrested for allegedly scratching her husband during an argument. According to Peoria police spokesman Jay Davies, Deputy Deborah Moyer was taken into custody around 6 p.m. Saturday in Peoria on charges of assault and domestic violence. Moyer is accused of scratching her husband, who is also an MCSO deputy, on the head and upper chest several times during an argument about their divorce proceedings. Officers responded after a neighbor called police saying he heard a fight in the apartment above him. When that neighbor went to check to see if everyone was OK, both Moyer and her husband left the apartment and told him to get back inside... Moyer was featured in TLC’s “Police Women of Maricopa County”. MCSO spokesman Jesse Spurgin said Moyer, who has worked as a deputy for 17 years, has been placed on administrative leave... [Full article here]
MCSO DEPUTY TURNED REALITY STAR ARRESTED FOR DOMESTIC VIOLENCE
by Carina Sonn
azfamily.com
May 9, 2011 at 9:45 PM
[Excerpts] ...Detective Deborah Moyer starred in "Police Women of Maricopa County," a TLC reality show series... A police report states Moyer got into an argument with David Moyer, her soon-to-be ex-husband over his “marital infidelities"... The neighbor also reported David Moyer warned him, "Go back inside your apartment and mind your business. I'm a cop." Officers arrested Deborah Moyer but soon after that she began to experience chest pains and became pale. The fire department was called in and determined that Moyer needed to be taken to the hospital. She was never booked into jail... She faces one count of assault or domestic violence. Police say the pair had been married for about 20 years and have two sons together. [Full article here]
MARICOPA SHERIFF'S OFFICE DEPUTY ACCUSED OF DOMESTIC VIOLENCE
The Arizona Republic
by Karen Schmidt
May. 9, 2011
[Excerpts] ...Officers suspect Moyer was the primary aggressor in an argument with her husband, Davies said. The name of Moyer's husband was not released. Police believe that Moyers scratched her husband on his head and upper torso... The four-episode reality show depicted Moyer and three other women in law enforcement as they juggled families and career. [Full article here]
[police officer involved domestic violence oidv intimate partner violence ipv abuse law enforcement public safety alleged female perpetrator perp arizona state politics]
on 5/11/2011