FROM PREVIOUS POST:
[NYPD] Police Commander Juanita Holmes beaten, injured by estranged husband, Ex-Detective Fowlkes - Deputy Inspector Juanita Holmes wound up in the hospital with broken ribs and her estranged husband, retired Hempstead, L.I., Detective William Fowlkes, was arrested... "She has the care and support of her friends and co-workers as she recovers from this traumatic act of violence"...
NO JAIL FOR EX-COP WILLIAM FOWLKES IN BEATING OF HIS OFFICER WIFE
New York Daily News
BY BOB KAPPSTATTER
Wednesday, May 4th 2011, 4:00 AM
[Excerpts] A man [William Fowlkes] charged with beating his wife, an NYPD precinct commander [Deputy Inspector Juanita Holmes ], avoided jail time after pleading guilty to a couple of misdemeanors, officials said... Holmes, the commanding officer of the 81st Precinct in Bedford-Stuyvesant, suffered broken ribs... Fowlkes, a retired Hempstead cop, claimed Holmes, 46, was having an affair with the NYPD detective. A Suffolk County judge on Monday ordered Fowlkes to attend domestic violence classes. He pleaded guilty to third-degree assault and criminal trespass, both misdemeanors, and disorderly conduct, a violation. The judge also issued an order of protection for Holmes, a 24-year NYPD veteran, and said she'll sentence Fowlkes to three years of probation... [Full article here]
SINCE LAST POST: 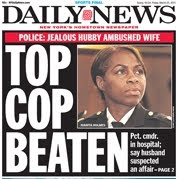 'PUNCHED & KICKED IN HEAD': Brutal details of wife-cop 'beatdown'
New York Post
By Kieran Crowley and Jamie Schram
March 26, 2011
[Excerpts] A top Brooklyn cop told Long Island police her jealous husband beat her senseless in an unprovoked attack outside the home of a male friend, sources said yesterday. "I was visiting a friend of mine when my husband showed up at the door," 81st Precinct Deputy Inspector Juanita Holmes, 46, told Suffolk County cops after Monday's assault that left her with broken ribs and bruises. "He was banging on the door. I went outside to talk to my husband, [and] he grabbed me and threw me to the ground," she said of retired Hempstead Detective William Fowlkes. "He punched and kicked me repeatedly about my head and body"... [Detective Robert Santos:] "I was upstairs, Juanita was downstairs in my living room," Santos said in a statement to cops. "I went running downstairs with my firearm because I was afraid for my safety. Juanita told me it was her husband, that she was going to go outside to talk to him. "She also told me to lock the door and stay inside." After allegedly punching and kicking his wife, Fowlkes allegedly "came to the door and kicked my door open," Santos said. "I grabbed my firearm and pointed it at him, and told him to stop, get out of my house." Fowlkes backed out of the house at that point but wasn't ready to quit, Santos told authorities. "He went back to Juanita, threw her back on the ground, and again started kicking and punching Juanita on the ground. He "yelled at Juanita, 'You f--king bitch, you better stay there, you better not go home'" Suffolk County police arrested Fowlkes on assault, criminal trespass and criminal mischief charges. Santos denied he and Holmes were having an affair, saying, "No. It's nothing like that at all"... [Full article here]
[police officer involved domestic violence oidv intimate partner violence ipv abuse law enforcement public safety lethal brass teflon new york state politics]
on 5/05/2011