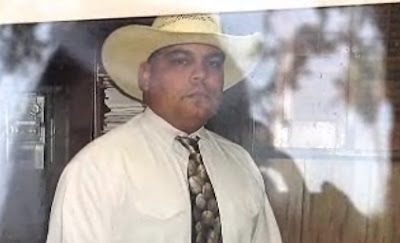 AUTOPSY: LA JOYA CHIEF'S DEATH A SUICIDE
The Monitor
By Gail Burkhardt, Naxiely Lopez, Ildefonso Ortiz and Jared Taylor
May 14, 2011
[EXCERPTS] ... La Joya [TX] Police Chief Jose Del Angel, had recently separated from his common-law wife. The couple had been together off and on the past seven years. They had two children together. But the latest separation hit Jose worse than ever... “He told us that he didn’t know what to do — that he was tired... He just wanted to be loved.” Jose told his brother the separation left him feeling “as if he had a hole in his heart”... No one interviewed said they were shocked at Del Angel's suicide... Del Angel's grief from the separation became apparent to those closest to him at work and at home. But whether that actually led him to take his life will never be known... One of the last memories the family will have of him is spending Saturday night at the chief's house, watching a boxing match, Sergio said. The late chief called all of his brothers. He made sure they all made it. "He wanted all of us there," the brother said. "It seems as if he wanted to say goodbye in a sort of way." [Full article here]
[police officer involved domestic violence oidv intimate partner violence ipv abuse law enforcement public safety lethal fatality fatalities TEXAS state politics]
on 5/22/2011