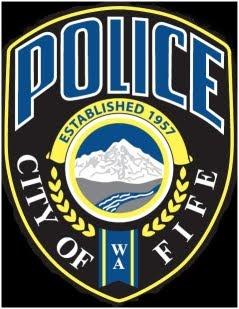 [SEE UPDATE IN COMMENTS BELOW.]
Fife Police Detective Shane Farnworth drove drunk in a police car, crashed, and left the scene of the accident. He wasn't asked for a blood test. Due to"agitation" he was put in "wrist restraints." He felt low enough to be evaluated at the hospital. Police removed his arsenal. No DUI charges - just "alleged misconduct."
... "The alleged misconduct has to do with having that accident, his car leaving the scene of an accident," says Fife City Manager Dave Zabell...
I'm glad he got help and made it through the night.
Divorce is hard but we have to make the right choices. I was a mess after mine, and had I been a cop I would have had to take leave. An officer can break the law only if we all can. Regardless of unfair career repercussions and peer judgments, even a cop has to know when to say when and take a break or reach for help.
FIFE OFFICER ACCUSED OF CRASHING PATROL CAR WHILE DRUNK
KOMO
By Keith Eldridge
May 5th, 2011
[Excerpts] A Fife police detective [Shane Farnworth] is accused of driving drunk in a police car - and getting into a crash... But tonight Farnworth is at home on unpaid leave while his case is investigated... Farnworth allegedly admitted drinking and driving his police vehicle - and crashing it somewhere along Bay Street... Farnworth reportedly says he just drove the rest of the way home... "The alleged misconduct has to do with having that accident, his car leaving the scene of an accident," says Fife City Manager Dave Zabell. The Fife Police Department found out about the incident after Pierce County deputies were called to Farnworth's home after getting reports of possible suicidal individual. The police report says Farnworth was despondent about the crash and about his recent divorce. Pierce County deputies say Farnworth was agitated and needed to be placed in wrist restraints. The sheriff's supervisor on the scene ordered Farnworth to be taken in for a mental evaluation. Several weapons, including his service revolver, were removed from the premises. But no blood alcohol test was given - and investigators reportedly never found out exactly where the crash occurred. "Our investigation is into his misconduct. Whatever issues are out there regarding him personally are not part of the official investigation of misconduct," says Zabell. All of this comes as reports surfaced this week of an investigation of another Fife officer. The department suspended Lt. Doug Burris for a week without pay for not reporting that a fellow department employee complained that another Fife officer was sexually harrassing her... The Sumner Police Department is the outside agency conducting the investigation, and the findings are due out shortly. Then the Fife city manager will have to decide what action to take - anything from no action to termination. [Full article here]
[police officer involved domestic violence oidv intimate partner violence ipv abuse law enforcement public safety handcuffs lethal suicidal washington state politics]
on 5/06/2011