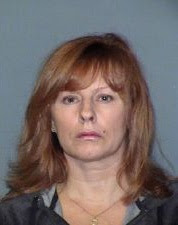 Brinda Sue McCoy, 47, who is married to Oceanside Police Chief Frank McCoy, called 911 and said she needed help last Thursday. When the Cypress Police Dept. arrived at her home, she refused to come out and put the gun to her head. According to the District Attorney's Office she then fired the gun twice at officers who were behind parked cars. The SWAT team used a bean-bag gun to stop her by waiting until she stepped into the doorway of the house and firing the bean bags at her. According to the Cypress police spokesperson, she had no gun at that point...

OCEANSIDE: POLICE CHIEF'S WIFE TO STAND TRIAL FOR STANDOFF: Brinda Mccoy Accused Of Shooting At Police At Her Orange County Home In December
North County Times
By Teri Figueroa
Friday, May 6, 2011 8:45 pm
[Excerpts] The despondent wife of Oceanside's chief of police knew that officers were hunkered down behind parked cars when she shot at the vehicles during a three-hour standoff at the couple's Orange County home last year, a police officer testified Friday. The testimony came during a preliminary hearing for Brinda Sue McCoy, who was ordered to stand trial for shooting at police with one of her husband's guns during the incident, which her attorney said was an attempt at suicide by cop. McCoy - whose husband is Oceanside police Chief Frank McCoy - faces six felony counts of assault with a deadly weapon on a peace officer and three counts of discharging a firearm with gross negligence. She could face upward of 58 years in prison if convicted... On Friday, the McCoys were in Orange County Superior Court in Santa Ana for Brinda McCoy's preliminary hearing... According to testimony, Brinda McCoy knew that officers were crouched behind parked cars when she shot at a vehicle during the standoff. Veteran Cypress Officer Paulo Morales acted as a crisis negotiator during the incident. He testified that, during a series of phone calls during the standoff, Brinda McCoy said she wanted to die. At one point, Morales ---- who said he has known the defendant for about 15 years ---- said she began insisting that someone needed to move her adult son's Nissan pickup, which was parked in front of her home. Morales said Brinda McCoy told him to have the truck moved or she would shoot it. "I pointed out there were officers there (taking cover behind the truck), and she said 'Well, I know that. I can see them,'" Morales said. He said he warned Brinda McCoy that if she shot the truck, one of the officers could be struck by the bullet. "She said she didn't care, to 'move the truck or I will shoot,'" Morales said. Standing in front of a picture window in her home, Brinda McCoy fired a shot into the Nissan, according to testimony. Officer Rebecca Mathias - one of the officers crouched behind the truck - said she had to check herself to be sure she hadn't been hit. At some point during the standoff, McCoy's husband arrived at home and told officers his wife was using his semiautomatic Sig Sauer .45-caliber handgun... After the hearing, Frank McCoy declined to comment, saying only, "This is a personal matter"... [Full article here]

BRINDA SUE MCCOY IS IN DEEP DOO DOO--AND LUCKY TO BE ALIVE
OC Weekly
By Matt Coker,
Thu., Dec. 23 2010
[Excerpts] Brinda Sue McCoy is looking at a possible sentence of 58 years in prison if convicted of the charges against her, but based on the description of the incident that led to her Dec. 16 arrest, the 47-year-old Cypress resident is lucky to be alive. She allegedly pointed a semi-automatic firearm at officers who responded to her 9-1-1 call for help--and then fired at them. Twice! The Orange County District Attorney's Office statement on the charges against McCoy follow... McCoy is accused of refusing to leave her house, pointing a firearm at her head, and then at the ceiling before pointing it directly at officers outside. Police warned the defendant that if she fired her weapon, she would harm police officers. McCoy is accused of firing the gun twice at police officers who were stationed behind two parked vehicles outside the defendant's home. SWAT stopped McCoy using a bean bag gun. Senior Deputy District Attorney Rebecca Olivieri of the Special Prosecutions Unit is prosecuting this case. [Full article here]

OCEANSIDE CHIEF'S WIFE CHARGED IN SWAT INCIDENT
Union-Tribune
By Kristina Davis
December 23, 2010
[Excerpts] ...Brinda Sue McCoy, 47, was released from jail Wednesday after posting $250,000 bail. She was charged Wednesday with five felony counts of assault with a semi-automatic firearm on a peace officer and two felony counts of discharging a firearm with gross negligence, according to the Orange County District Attorney’s Office... Authorities said Brinda McCoy called 911 about 7 p.m. stating she needed help. When Cypress police officers arrived and tried to get her to come outside, she refused, prosecutors said... Brinda McCoy was placed under observation at a hospital for 72 hours before being arrested Wednesday afternoon, officials said. She posted bail immediately, according to Cypress police... McCoy, a registered nurse, lists her employer as Hoag Hospital in Newport on her Facebook page. Two days before the shooting incident, she wrote that the family dog had to be euthanized... “If there are personal issues in his life, I expect that he will deal with those accordingly,” [City Manager Peter] Weiss said... [Full article here]

OCEANSIDE: POLICE CHIEF'S WIFE CHARGED WITH SHOOTING AT POLICE - Three-hour standoff in cypress ends with felony arrest
North County Times
By Ray Huard
Thursday, December 23, 2010
[Excerpts] ...[Brinda Sue McCoy's] first court appearance is scheduled for Jan. 26 in the Orange County Central Justice Court in Santa Ana, police said. If convicted, she faces up to 58 years in prison, according to prosecutors... Oceanside Mayor Jim Wood and other city officials seemed stunned Thursday when informed by reporters of the standoff between McCoy's wife and police, but most said they didn't think it would affect McCoy's ability to oversee the Police Department. "I'm just flabbergasted," said Wood, a retired Oceanside police detective. "I don't know what to say because she's such a nice person. This is almost unbelievable"... McCoy hasn't asked for time off and won't be asked to take time off, said City Manager Peter Weiss... Officials gave no details about what prompted the incident... The standoff ended when Brinda McCoy stepped into the doorway of the house and members of the Cypress police SWAT unit fired bean bag weapons at her... Brinda McCoy's Facebook page paints a relatively normal family life up until the day before the incident. On the evening of Dec. 15, she posted a link to a YouTube video of a Rodney Carrington standup comedy act. A day earlier, she posted a photo of the McCoys' son, Frank Jr., and their dog, Sam. "Frank took this picture of Frankie and Sam just before we put him down," she wrote. "Soooo sad and quiet around here without him!"... [Full article here]

BRINDA SUE MCCOY: FORMER CYPRESS FIRST LADY CHARGED WITH 7 FELONY'S FOR USING A SEMI-AUTOMATIC FIREARM AT CYPRESS POLICE OFFICERS. WHAT WAS SHE THINKING?
Economy4ABC.Blogspot.com
By Randy Economy
Thursday, December 23, 2010
[Excerpts] Oh man. This is totally bizarre. Call this one "What was she thinkin?" or "Former City First Lady Gone Wild." Your pick... As I mentioned, and as just about every active resident of Cypress is well aware of, Brinda McCoy is married to Frank McCoy, who served eight years on the Cypress City Council, including being mayor. On top of that, Frank is the current chief of the Oceanside Police Department in San Diego County. I can't even imagine what Chief McCoy is thinking this week. My thoughts are with him and the McCoy family tonight... [Full article here]

ORANGE COUNTY JUDGE ORDERS ALL FIREARMS REMOVED FROM CHIEF'S HOME - OCEANSIDE: Police chief's wife pleads not guilty
North County Times
By Brandon Lowrey
Wednesday, January 26, 2011
[Excerpts] The wife of Oceanside's police chief pleaded not guilty Wednesday to firing one of her husband's guns at officers who were trying to talk her out of suicide during a three-hour standoff at the couple's Orange County home. After Brinda Sue McCoy, 47, entered her plea at the Santa Ana courthouse, Orange County Superior Court Judge Erick L. Larsh ordered her and her husband to remove all firearms from their home ---- including Chief Frank McCoy's service weapon. Larsh also signed an order that restricts Brinda McCoy, a registered nurse, from practicing her profession until she completes a mental health evaluation... McCoy has remained free on $250,000 bond since December and is set to return to court in March. Court documents obtained Wednesday reveal more details about a tense standoff with Cypress police officers and show she may have been trying to force them to kill her. At 7:13 p.m., she called the Cypress Police Department and said she didn't feel well, but refused an offer of help from paramedics. Instead, she demanded that police come, adding that she was home alone and wanted to be "taken out of her misery." The phone line then was disconnected. Officers arrived to find her standing in the front window of her two-story suburban home, facing them and holding her husband's semiautomatic Sig Sauer .45-caliber handgun to her head... McCoy refused their pleas for her to come outside and she began pacing inside the house between the front door and front window, sometimes pointing the gun at her own head and other times taking aim at the officers who were trying to talk her down. The officers took cover behind a truck parked in the driveway - a Nissan Titan that belonged to the Long Beach Police Department. Her son is a Long Beach police officer and her husband was a commander at that department before he came to Oceanside. At about 8:30 p.m., McCoy fired a shot at the truck... McCoy later fired a second round... Throughout the standoff, she made several calls to friends... At 10:23 p.m., she stepped outside. SWAT officers shot her in the chest with a beanbag shotgun and arrested her... Records show she was taken to a local hospital for evaluation, then moved to a psychiatric hospital... Chief McCoy was working Wednesday and was not at the hearing... McCoy has a pretrial court date set for March 18... [Full article here]
[police officer involved domestic violence oidv intimate partner violence ipv abuse law enforcement public safety lethal suicidal brass female perp perpetrator california state politics]
on 5/08/2011