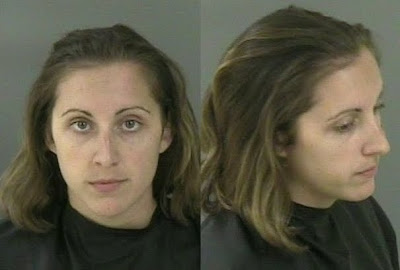 FHP FIRES TROOPER ACCUSED OF SHOVING VERO BEACH WOMAN, BARGING INTO HOUSE
By Lamaur Stancil
Posted May 4, 2011
[Excerpts] The Florida Highway Patrol announced Wednesday it has fired second-year trooper Paige Martin after she was charged with burglary and misdemeanor battery. Martin, 22, was put on administrative duty Monday after the charges, FHP officials said. She posted $3,000 bail Tuesday at the Indian River County Jail. Executive staff made the termination decision Tuesday evening, officials said.... [Full article here]
ONE DAY EARLIER:
FLORIDA HIGHWAY PATROL TROOPER, ACCOMPLICE ARRESTED IN VERO BEACH HOME INVASION
Treasure Coast
Lamaur Stancil
Posted: 05/03/2011
[Excerpts] An off-duty Florida Highway Patrol trooper was accused of barging into a woman's home and shoving her on Monday, Vero Beach police said. Paige Marie Martin, 22, whose affidavit identified her as a trooper, was charged with burglary of an occupied dwelling and misdemeanor battery... A woman living at an apartment in the 1800 block of 40th Avenue said Christine Gannon, 20, of the 100 block of 56th Drive Southwest, Vero Beach, knocked on her door about 5:30 a.m. Monday, according to the affidavit. The woman said she did not know Gannon, but opened the door because she assumed it was someone else... Once the door opened, Martin appeared and demanded to know the whereabouts of someone [her ex-boyfriend] who was not there, the affidavit said. The apartment resident tried closing the door, but Martin and Gannon barged their way inside, she told police. Once inside, Martin shoved the woman and continued her demands to find the person for whom she was searching, according to the report. "I'm Cuban, and I'll show you I'm crazy," Martin said to the apartment resident... Martin and Gannon fled when the apartment resident called 911. Officers said they went to Martin's home and took her into custody. Martin and Gannon, who was charged with burglary, were held Monday at the Indian River County Jail pending their bail hearings Tuesday. The burglary charge for both of them involves the allegations of forcing their way into a dwelling. [Full article here]
[police officer involved domestic violence oidv intimate partner violence ipv abuse law enforcement public safety female perp perpetrator professional florida state politics]
on 5/08/2011