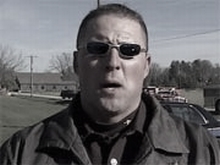 My THANKS go out to all the law enforcement that responded.
My prayer is for her safety and for his healing (in a different line of work).
on 11/22/2006