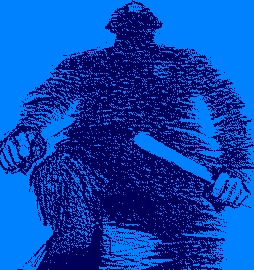 ...The woman [his wife] testified that she suffered a swollen left eye and bloody lips during the last alleged attack Jan. 12, saying her spouse [Long Beach Police Officer Brandon Preciado] repeatedly slapped her across the face, bent her left pinky back, bit her face and threatened that she should “prepare to die” before she ran to a neighbor’s house to seek help....

PREVIOUS POST:
[CA] Long Beach Police Officer Preciado 5-hour stand-off, tools of torture, and 21 domestic violence felonies - with injury to spouse - [Long Beach Police Officer] Brandon Preciado was charged Tuesday morning with a total of 21 counts, including nine felony counts of assault with a deadly weapon and making a criminal threat, all felonies... Weapons allegedly used in the beatings included a flashlight, belt, hammer, broom handle and baton... A protective order requiring Preciado to stay away from his wife was issued by the court, but the court didn't issue a stay-away order for the couple's children... [The news is still all about him. Who is helping her through this? Was that a Long Beach Police issued flashlight and baton?]

A 29-year-old Long Beach police officer accused of repeatedly assaulting and threatening his wife at their Pico Rivera home was ordered Wednesday to stand trial.

Los Angeles Superior Court Judge Terry A. Bork found sufficient evidence to require Brandon Preciado to proceed to trial on 18 felony counts, including corporal injury to a spouse, assault with a deadly weapon, assault by means likely to produce great bodily injury and criminal threats, and one misdemeanor count of resisting, obstructing or delaying a peace officer.

Bork granted the defense’s request to dismiss two other counts of corporal injury to a spouse, citing insufficient evidence.

The alleged assaults occurred between Sept. 18 and Jan. 12 at the couple’s  home.

Preciado’s wife, Yessenia, who testified that she did not want to be in court, told Bork that her husband repeatedly struck and choked her and threatened at times to injure or kill her.

The mother of three testified that he threatened to hit her with a work-issued flashlight and to break her jaw if she didn’t tell him the truth during the first attack last September and then wrapped a belt around her neck.

Preciado’s wife alleged she suffered bleeding from her nose during an attack Nov. 11 in which her husband grabbed her neck in a headlock, and that he choked her during a New Year’s Day run-in during which he told her that he wouldn’t kill her at the time because her brothers were in the home.

“Did you take him seriously at that moment?” the prosecutor asked.
“Yes,” she again replied.

Preciado hit her repeatedly Jan. 9 with his police-issued baton after ordering in an angry voice for her to get “on all fours,” and then woke her up a day later with his forearm against her neck, she testified.

The woman testified that she suffered a swollen left eye and bloody lips during the last alleged attack Jan. 12, saying her spouse repeatedly slapped her across the face, bent her left pinky back, bit her face and threatened that she should “prepare to die” before she ran to a neighbor’s house to seek help.

Under cross-examination, she testified that her husband had been drinking alcohol before some of the run-ins and that she sought medical help after the last attack.

The prosecution’s last witness, Los Angeles County sheriff’s Deputy Jaime Caloca, testified that he was among a team of deputies called in at about 6:50 a.m. after efforts had unsuccessfully been made, including a helicopter hovering overhead, to try to coax Preciado out of his home. He said Preciado was arrested after he came out of the home about 20 or 25 minutes later.

Preciado remains jailed without bail. He is due back in Los Angeles Superior Court March 14 for arraignment.

A Long Beach Police Department representative Wednesday reiterated that Preciado has been relieved of his duties pending further investigation.