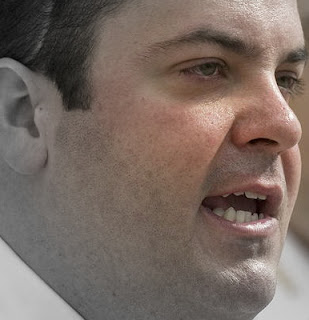 EX-BROWARD DEPUTY MAURY HERNANDEZ ACCUSED IN DOMESTIC CASE
Sun Sentinel
February 5, 2013
[Excerpts] For the second time since being shot in the head, retired Broward Sheriff's Office deputy Maury Hernandez is in the news for something unrelated to his miraculous recovery. This time, Hernandez, 33, widely considered one of South Florida's most inspiring figures... Sunday's alleged incident, as described in a police report, seems to depict the actions of a short-fused man. And that has some questioning whether it was isolated, or a lingering issue stemming from the fragment of the .45 caliber bullet still lodged inside Hernandez's head. His brother, Hallandale Beach Police Officer Josue Hernandez, told reporters Maury was not a violent man, but experts in traumatic brain injuries say violence often emerges over the years... [Valerie Breen, president of the Brain Injury Association of Florida] said oftentimes family members suffer in silence as their loved one changes physically and emotionally... Hernandez's wife, [REDACTED]  called her own colleagues for help. She told investigators her husband tried to strangle her during an argument... Hernandez allegedly shoved his wife several times as she tried to remove her son from the car seat. Hernandez, still sitting in the driver's seat, allegedly reached over and grabbed her neck with his right hand and she was "not able to breathe," according to the report. [REDACTED] pushed herself away, retrieved her son and drove to her parent's house, where she called police. Investigators noted a bruise and red scratches in the front area of her neck, according to the report. He was charged with one count of felony battery by strangulation... In asking for a reduced bond, Hernandez's attorney, Nayib Hassan, said the former deputy was a decorated hero in the community. He questioned whether Hernandez was physically capable of injuring his wife... [Full article here]
[police officer involved domestic violence oidv intimate partner violence ipv abuse law enforcement public safety lethal cop on cop darling teflon state politics]
on 5/25/2013