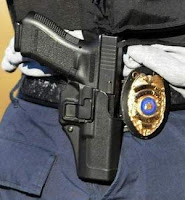 MAY 03 2017
[Excerpts] A Philadelphia police officer [Caren Perez] was acting in self-defense when she shot and wounded her husband two weeks ago in the driveway of their Bucks County home... David Perez, 27, who is recovering from the wound to the abdomen, has been charged with stalking and simple assault on his wife... David Perez's attorney, said his client “categorically denies any prior abuse, either physical or mental"...  When police were called to the couple's home on the morning of April 18, they found the husband in the living room, shot... The wife later told investigators that her husband had assaulted her several times since 2014... On the morning of April 18, Caren Perez later told investigators, her husband demanded to see the contents of her phone, and after she refused... Fearing for her life, she said, she grabbed her handgun, and during a struggle, it fell to the floor. David Perez then took his gun, and while the two struggled over it, he pointed it at himself and tried to put his wife's finger on the trigger. "Go ahead, shoot me, take me out of my misery, pull the trigger," he is quoted as saying in the affidavit... David Perez then "drop kicked" his wife, charged at her, and made her fear he was going to kill her, she told investigators. That's when she pulled out her gun and fired once... [Full article here]
[police officer involved domestic violence oidv intimate partner violence ipv abuse law enforcement public safety lethal pennsylvania state politics female]
on 5/05/2017