4 years ago today Marshall County Sheriff's Investigator David Lowe was shot and killed by his wife Kathy. I thought I'd look up whether the case had been resolved yet and it has. After two mistrials, Kathy Lowe pleaded guilty last March to manslaughter in her husband’s death. Judge Tim Jolley sentenced her to three years probation, and gave her credit for time served in jail. 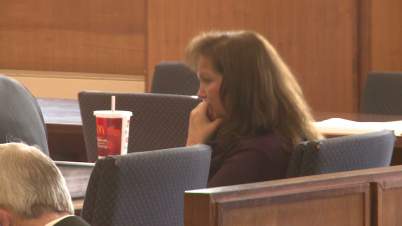 Previous post:
[AL] Kathy Lowe will be tried 3rd time in shooting death of her Sheriff's Investigator husband, David - Kathy Lowe will face a third trial in November for the November 11, 2008 death of her husband David Lowe. David, a former Marshall County Sheriff's Office deputy and investigator for the Marshall County District Attorney's office, was found shot twice in the back and side, at the Horton home the couple shared.

KATHY LOWE TO PLEAD GUILTY
The Sand Mountain Reporter
By Elizabeth Summers
Wednesday, March 14, 2012
[Excerpts] GUNTERSVILLE — Kathy Lowe was expected to plead guilty to manslaughter Wednesday... David Lowe had served as an investigator for the Marshall County Sheriff’s office and District Attorney’s office prior to his death. “Given the circumstances, this is a fair resolution to the case,” [Blount County District Attorney Pamela] Casey said Wednesday. “Now the state, Kathy Lowe and the families involved can move on with their lives.” Casey said Lowe was expected to be sentenced to 10 years in prison but would be allowed to petition for probation. “I wanted her to have that felony on her record,” Casey said. “We won’t oppose if she asks for probation. “But this way, we will have a resolution, and she won’t be entitled to any of the life insurance money.” Kathy Lowe had been on trial in September 2010 and December 2011. Both trials ended in mistrials after jurors could not reach a unanimous verdict... “I was going to ask she be put in jail until the trial because she was doing things to try and taint the jury pool”... Kathy Lowe admitted shooting David following a day-long argument and alleged she had been held hostage by David most of the day at gunpoint. Her defense attorney, John Paul Burson, also argued Kathy Lowe had suffered emotional and physical abuse at the hands of David Lowe for much of their married life. During both trials, prosecutors countered Kathy Lowe had plotted to kill David Lowe over several months so she could cash in several life insurance policies. Since David Lowe’s death, the family’s Horton home had burned to the ground. The fire, reported just before 3 a.m. on March 4, 2011, was deemed arson by the Marhsall County Arson Task Force. No one has been charged... The couple’s son, Brian, died Nov. 3 following a lengthy battle with a chronic illness. [Full article here]

KATHY LOWE PLEADS GUILTY TO MANSLAUGHTER
WHNT
by Carson Clark
March 14, 2012
[Excerpts] Kathy Lowe has pleaded guilty to manslaughter in her husband’s death. She entered the plea Wednesday afternoon in Marshall County. Lowe was put on trial twice for the 2008 death of her husband, David Lowe.  However, both trials ended in hung juries. A manslaughter plea carries a sentence of 10 years.  However, Judge Tim Jolley sentenced her to three years probation, and gave her credit for time served in jail.  Lowe will not have to serve another day behind bars. She will have to pay a $5,000 fine. Lowe admitted to killing her husband, David, but claims she acted in self-defense. The crime happened in Marshall County, but the Blount County District Attorney’s office prosecuted the case because David Lowe was an investigator for the Marshall County DA’s office. Prosecutors contend Lowe shot her husband to collect insurance money.  However, the defense says Lowe was a battered wife who couldn’t take the abuse any longer. [Full article here]

‘SLAP ON THE WRIST’: KATHY LOWE GETS PROBATION; SENTENCE UPSETS VICTIM’S BROTHER, HIS WIFE
The Sand Mountain Reporter
By Elizabeth Summers
Friday, March 16, 2012
[Excerpts] Curtis Lowe will always remember his brother, David Lowe, as a friend to many, willing to help in any way possible. But on Wednesday, he felt his brother’s memory was forever tainted when David’s wife, Kathy Lowe, pleaded guilty to manslaughter in the case involving her husband’s death in 2008 and received what Curtis feels is a “slap on the wrist” for punishment... [Judge Tim] Jolley then handed down a 10-year suspended jail sentence and ordered Kathy Lowe to spend three years on supervised probation and pay a $5,000 fine, court costs, $750 to attorneys and a $100 victim-assessment fee. “Justice wasn’t served,” Curtis Lowe said... Patricia Lowe, Curtis’ wife, had hoped a third trial would end with a guilty verdict and a sentence of jail time for Kathy Lowe. “I would have liked to have seen a third trial,” she said. “I think she should have served some time in jail. She hasn’t spent a day there yet, that I am aware of. But she will have to face the Lord and she won’t be able to walk away from that.” Lowe pleaded guilty to Marshall County Circuit Judge Tim Jolley to the Class B felony. She was represented by Albertville attorney John Paul Burson... Patricia Lowe said she felt disappointed with the case’s outcome. “We felt she might try to make a plea deal, and that is what she did in the end,” Patricia Lowe said. “Knowing she will have a felony on her record, knowing she won’t ever be able to vote again and knowing she won’t get any of the insurance money means a lot to us”... From the beginning, Kathy Lowe and her defense attorneys maintained she and her children, Amanda and Brian, suffered mental and physical abuse at the hands of David Lowe over the years. She claimed she acted in self-defense that night in 2008, following a daylong fight with David Lowe, where he allegedly held her hostage and threatened her with a gun during the day. Prosecutors painted her as an adulteress who had plotted to kill David Lowe for months as a way to collect on more than $100,000 in life insurance policies... [Full article here]
officer involved domestic violence oidv intimate partner violence ipv abuse law enforcement public safety lethal fatality fatalities murder female perp perpetrator alabama state politics]
on 11/11/2012