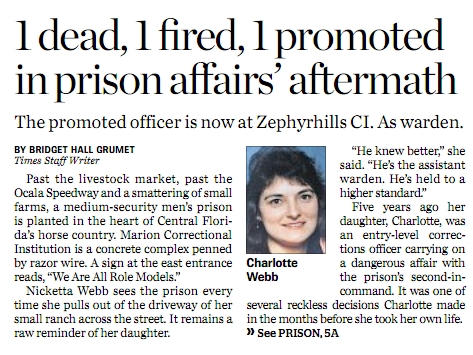 Corrections Officer Charlotte Mae Webb is said to have killed herself on July 29 of 2005. She's gone and can't say a word. What we know comes from 2 different Marion Correctional Institution supervisors who were both supposedly having a relationship with her and who both had much to lose - married Assistant Warden Gustavo Mazorra and married Sgt. George Sherrets. Charlotte's body was found on the floor of her home and she is said to have overdosed on antidepressants but no reference to testing was reported in the news so we don't know if it was assumed because of an open pill bottle or something of that nature. Charlotte is an officer and deserved a full outside investigation.

WARDEN'S PAST INCLUDES AFFAIR WITH SUBORDINATE
May 9, 2010
[Excerpts] ...Nicketta Webb sees the [Marion Correctional Institution] prison every time she pulls out of the driveway of her small ranch across the street. It remains a raw reminder of her daughter. “He knew better,” she said. “He’s the assistant warden. He’s held to a higher standard.” Five years ago her daughter, Charlotte, was an entry-level corrections officer carrying on a dangerous affair with the prison’s second-in-command [assistant warden, Gustavo Mazorra]. It was one of several reckless decisions Charlotte made in the months before she [allegedly] took her own life. The assistant warden was transferred but never disciplined for the inappropriate relationship. He escaped sanction, and this spring earned the promotion of his career: He became the warden at the Zephyrhills Correctional Institution... Mazorra declined to discuss his affair with Charlotte Webb and the events of five years ago. “I made a stupid mistake”... Mazorra was shuttled 50 miles away to Lancaster Correctional Institution in Trenton, where he took a “voluntary demotion” to colonel... But the incident was never treated as a disciplinary matter. There was no internal investigation. No reprimand. No letter of counseling in Mazorra’s file. No suggestion of any missteps in the evaluation that followed seven months later, when Mazorra received a perfect 5 in the leadership category that covers professionalism with subordinates... The only critical memo in Mazorra’s file was dated Feb. 4, 2000, when he allowed the postage machine to run out at a Miami-Dade prison, delaying the delivery of outgoing mail. “Behavior of this type cannot be, and will not be, tolerated,” the memo said... [T]he affair wasn’t treated as a disciplinary matter because no policy had been violated. Nothing in the prison code of conduct, and nothing in the rules governing state employees, bars a supervisor from dating a subordinate... At the same time, Charlotte was involved with another married superior at the prison [Sgt. George Sherrets Jr.], one of the sergeants on her midnight shift... [He] came clean with investigators and his bosses after her death. He acknowledged using drugs with her. He was promptly fired. But Nicketta believes the “good ol’ boy” system took care of Mazorra... Nicketta, 63, remains haunted by her daughter’s death. Charlotte’s son, Jeff Lovelady, can’t accept it. He was 15 then. He talked to her by phone a few hours before she died. He was visiting his father in a Georgia hospital, and his mother promised to come pick him up in a few days. Promised — a word used sparingly in this family for commitments that came from the heart. “It’s always puzzled me,” said Lovelady, choking back the tears.. A few years ago, still burning with questions, he went to the Marion County Sheriff’s Office to request a copy of his mother’s death investigation. The clerk asked why. He explained he was Charlotte’s son. He took comfort in her response: "She said that's one case nobody will ever forget." [Full article here]

SIX YEARS AFTER CHARLOTTE'S DEATH:
Florida Department of Corrections
Spirit FM Broadcasts Live from Zephyrhills Correctional Institution
[Excerpts] On Thursday, 4/28/2011, history was made at Zephyrhills Correctional Institution. We hosted a live radio broadcast from within prison walls... Warden Gustavo Mazorra was asked how his faith enabled him to carry out his duties as warden. Warden Mazorra related that his faith is very important to him and as a Christian he can better exemplify a positive example for the inmates... [Full article here]