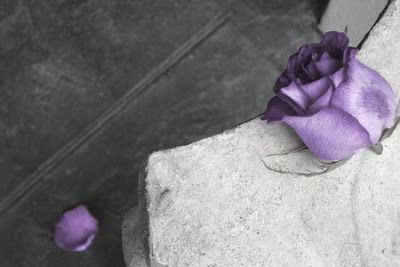 New York Police Officer Milta Ruiz Bruetsch was shot to death October 29, 1985 in the driveway of her brother's house by her husband, New York City Transit Police officer John Bruetsch. "The couple had been married 11 months and the relationship had been stormy from the start, with police often called to their apartment." He also had a history with domestic incidents from his previous marriage but had not been charged. Milta and John Bruetsch had a four-month-old child together.

NATIONWIDE ALERT FOR COP ACCUSED OF KILLING WIFE
October 30, 1985
[Excerpts] ...Authorities said the fugitive, John Bruetsch, 39, a New York City Transit Authority policeman, killed his wife, New York policewoman Milta Bruetsch, after he went to her brother’s home Tuesday in hopes of winning a reconciliation. She had moved out of their Bronx home three weeks earlier. On Tuesday, an argument broke out and Bruetsch dragged his 22-year-old wife to his car, shot her when she tried to flee and then shot her twice more in the back as she lay on the pavement, poice said. He then fled... The couple had been married 11 months and the relationship had been stormy from the start, with police often called to their apartment... Ed Silberfarb, a transit authority spokesman, said Bruetsch had been suspended twice, in 1978 and 1979, for violating a court order barring him from visiting his first wife. During his 17-year career, he had eight "derelictions" for minor offenses such as being late. He also had eight commendations. [Full article here] 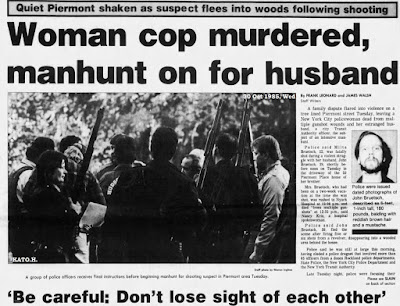 A FUGITIVE TRANSIT OFFICER ACCUSED OF FATALLY SHOOTING HIS WIFE
Oct. 31, 1985
[Excerpts] A fugitive transit officer accused of fatally shooting his estranged wife, a New York City policewoman, was captured Thursday... Kenneth Gribetz, the Rockland County district attorney, said John Bruetsch, 39, was arrested just after 9 p.m. for the Tuesday shooting death of his wife, Milta... In New York on Wednesday, police with a search warrant raided Bruetsch's apartment, seizing a .25-caliber automatic pistol, two rifles and a shotgun, Gribetz said. Bruetsch, a 17-year veteran of the Transit Police, allegedly followed his wife, from whom he was separated, to the Piermont home of her brother, Francisco Ruiz, also a New York policeman. He then dragged her out into a driveway and shot her four times. The couple had a four-month-old child, who was not harmed... [Bruetsch] was suspended three times for 30 days each and was close to being fired... Bruetsch joined the transit force in 1968 and his wife joined the city force Jan. 4, 1984. Bruetsch is divorced from his first wife, Barbara, and was charged in 1978 and 1979 with violating court orders barring him from visiting her. [Full article here]


A  COMMENT:"I was a rookie cop in the same NSU 8 training unit with Milta. I remember boyfriend at the time John always showing up at her assigned post to check up on her. I used to joke with her about how jealous he was and that he didn't trust her because he was so much older. I didn't think he would kill her over it. Milta was such a sweet person. In the couple of years that I knew her we became good friends along with my ex-wife who also was a rookie officer with us. I still miss her."

TRANSIT OFFICER IS ARRESTED IN SHOOTING DEATH OF WIFE
November 1, 1985
A New York City transit police officer accused of fatally shooting his estranged wife, a Bronx police officer, was arrested... According to the police, Mr. Bruetsch, who had been living in the Bronx, went Tuesday to the house at 59 Piermont Place, where his wife, Milta, 22, had been staying with her brother, Frank Ruiz, a New York City policeman. A relative of the victim, Rodolfo Rosado, who also lives at the Piermont Place address, told the police that the couple had argued. The police said he recalled watching Mr. Bruetsch drag his wife to his car, shoot her once as she tried to flee and several times as she lay on the pavement, and then flee... A spokesman for the transit police, Edward Silberfarb, said Officer Bruetsch, who has been on the force 17 years, had a "checkered record." He said it included eight commendations and four "serious incidents," three of which resulted in temporary suspensions from duty. During 1978 and 1979, Officer Bruetsch was accused of twice violating a court protection order that prohibited him from visiting his former wife, Barbara. They have three children. On one occasion, Barbara Bruetsch said her former husband had threatened her with a gun. Officer Bruetsch was suspended for 30 days without pay but was not brought up on criminal charges after his former wife refused to testify against him... He said the department had sought to have Officer Bruetsch dismissed from the force on three different occasions. "But to dismiss a cop once he's passed his probation period, you have to have a strong case"... [Full article here]

JURY SELECTION IN TRIAL OF OFFICER
July 28, 1986
[Excerpts] Jury selection is to begin Monday in the trial of a Transit Authority police officer accused of fatally shooting his wife... The transit officer's attorney, Jack Evseroff, said he would argue that his client was not responsible for his actions... [Full article here]

OFFICER SAYS HE DOES NOT RECALL KILLING WIFE
August 17, 1986
[Excerpts] ...Officer Bruetsch, 40 years old and a 17-year veteran of the New York transit police force, took the stand this week and testified that he does not remember dragging his wife, Milta, from her brother's home in Piermont, N.Y., and shooting her five times... Milta Bruetsch, an officer of the New York City Police Department, who was 22, had moved from the couple's Bronx apartment three weeks before the shooting to the Rockland County home of Francisco and Wanda Ruiz, her brother and sister-in-law. They, too, are New York City police officers... Two psychiatrists, Dr. Stanley Portnow and Dr. Daniel Schwartz, who were called by the defense, testified that the defendant was probably in an "altered state of consciousness" and unaware of what he was doing when he shot his wife as she tried to flee. The prosecutor, Harvey Eilbaum, Rockland County's chief assistant district attorney, maintains that John Bruetsch intentionally killed his wife when she refused to come back to their Bronx apartment... Mr. Eilbaum told the jury that the defendant shot his wife once in the side as she tried to get out of his car and then shot her four more times as she lay on the ground... A clinical psychologist from the Bronx who had seen John Bruetsch on several occasions after he was married, Dr. Jacob Jaffe, testified that he had warned the officer that his "commanding approach" to his wife was driving her away. Dr. Jaffe, a defense witness, said he had been trying to get his patient to control his anger. On his last visit, a week before the shooting, Dr. Jaffe said that Officer Bruetsch had said he had told his wife that if she did not return, "I would put a bullet through her head and a bullet through my head." At the time, Dr. Jaffe said, the threat "seemed more reaction and frustration than something he would actually do." [Full article here]

NYC TRANSIT COP CONVICTED IN WIFE’S DEATH
August 22, 1986
[Excerpts] A jury today convicted a New York City transit policeman of second-degree murder in the shooting of his estranged wife, a New York police officer... He faces up to 25 years to life in prison when he is sentenced on Oct. 2... Bruetsch’s lawyer, Jacob Evseroff, claimed in his closing arguments that his client shot his wife because he was obsessed with her. "Unwillingly, she was driving him crazy," he said. Bruetsch testified that he loved his wife and did not remember shooting her. He pleaded innocent by reason of insanity and was held on $10 million bail. Prosecution psychiatrists testified that Bruetsch had a history of violence toward women. [Full article here]
[police officer involved domestic violence oidv intimate partner violence ipv abuse law enforcement public safety teflon repeat hx lethal fatality fatalities murder new york state politics cop on cop]
on 6/16/2019