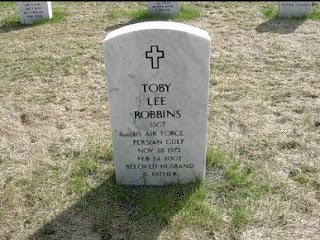 Alaska State Trooper Toby Lee Robbins killed himself after police responded to a 911 call from his wife that he was threatening to commit suicide during their domestic argument. He shot himself with his .40-caliber service pistol inside the front door of their Midtown residence after seeing two Anchorage officers outside. Responding officers heard loud voices inside the house, the home door opened, and police could see Toby had a gun. Toby slammed the door and a fired shot was heard almost immediately. What a terrible night for familly,
Toby Lee Robbins
Born 28 November, 1972
Overton, Dawson County, Nebraska, USA
Died 24 February 2002 (aged 29)
Anchorage, Anchorage Borough, Alaska, USA
Toby is buried at the Fort Richardson National Cemetery at Anchorage Borough, Alaska, USA - Section M, Site 133