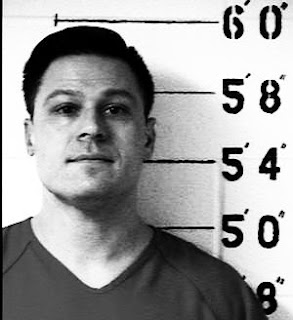 Married Massachusetts State Police Trooper Sgt. Bryan Erickson is accused of assaulting and trying to strangle his girlfriend as she attempted to break up with him, then fleeing Exeter police at high speeds... According to the affidavit, during the ensuing physical altercation, Erickson allegedly strangled the victim with one hand until she could not breathe, head-butted her and forcibly took her cell phone to prevent her from calling for help... The victim did respond affirmatively to the question asking if she thought Erickson might try to kill her...

[Excerpts] ...Exeter Police Detective Patrick Mulholland said the physical altercation lasted 20-25 minutes. The victim alleged she was thrown onto her bed by Erickson when he bent her wrist back, choked her with one hand and head-butted in the forehead and the side of her head. She also alleged he prevented her from calling 911 three times, repeatedly hanging up her house phone. “(The victim) indicated the second head-butt really hurt... She was crying throughout this (altercation), but she indicated after he did that, she felt pain down the side of her face and the side of her neck.” Erickson is charged with felony domestic violence assault and misdemeanor charges of domestic violence assault, domestic violence obstructing the report of a crime, disobeying an officer, criminal trespass and reckless operation. Erickson was denied pretrial release... Mulholland was questioned by Ryan Ollis, lead assistant county attorney, about police’s LAP (Lethality Assessment Protocol) report taken from the victim after the incident. MULHOLLAND SAID THE PURPOSE OF THE FORM IS FOR POLICE TO ASSESS THE LEVEL OF RISK A SUSPECT IN A DOMESTIC VIOLENCE INCIDENT POSES TO THE VICTIM... MULHOLLAND SAID THE VICTIM DID RESPOND AFFIRMATIVELY TO THE QUESTION ASKING IF SHE THOUGHT ERICKSON MIGHT TRY TO KILL HER, WHICH AUTOMATICALLY TRIGGERS PROTOCOLS TO HELP THE VICTIM seek protective services through Haven. Any combination of four of the final seven questions on the LAP form also triggers the protocol, Mulholland said. He testified the victim answered affirmatively to five questions asking if he has a gun or could get one easily, was choked by the suspect previously, forced intercourse when the victim did not want to engage, act violently jealous or controlling, and engage in spying or leaving threatening messages... If you need support Haven has trained confidential advocates available. The 24-hour hotline is (603) 994-SAFE (7233). Or to connect to our confidential, online chat service Monday to Friday, 9 a.m. to 4 p.m., please click the Chat Now button on the website at havennh.org. [Article here]

[Excerpts] ...Ryan Ollis, lead assistant Rockingham County attorney, argued to deny Trooper Sgt. Bryan Erickson release, in part, because of the details of the alleged assault and a prior accusation of strangulation stemming from an incident involving the victim last fall in Topsfield, Massachusetts... “She tries to push past (him after she asks for her cell phone), all 110 pounds of her, against this sergeant of the Massachusetts State Police to get her phone, and he grabs her, twists her wrists and places her on the bed and the assault begins,” Ollis said. “The assault isn’t a continuous pinning her down; she repeatedly tries to get up, he pulls her to the ground, he pins her hands, he squeezes her jaw bone, he shoves his finger in her mouth and hooks her cheek, he puts his hand on her throat, he puts his hand over her mouth because she is screaming … and he does this repeatedly as she tries to get away”... Erickson was originally denied bail during his arraignment Feb. 3 on charges of felony domestic violence assault and misdemeanor charges of domestic violence assault, domestic violence obstructing the report of a crime, disobeying an officer, criminal trespass and reckless operation, in connection to an incident occurring at his former girlfriend’s house in Exeter Jan. 31. After the alleged assault, Exeter police allege Erickson fled the scene and sped away from local police when they attempted to pull him over... [Article here]

[Excerpts] ...It is alleged Erickson head-butted, choked and threw the victim onto her bed by her twisted wrist, as well as prevented the victim from calling 911 multiple times over the course of a 20- to- 25-minute struggle inside her home. It is further alleged, after fleeing the scene, Erickson fled Exeter police at high speeds on residential roads from the Great Meadow Variety store in Exeter towards Route 108, via Gary Lane, before police called off the pursuit at the Exeter-Kensington town line. In denying Erickson’s bail, [Rockingham Superior Court Judge Martin] Hornigberg wrote Erickson posed a danger to the community and the victim through his alleged attempts to “control the actions” of the victim the day prior to the altercation after she reportedly went on a date with another man. The judge also noted his alleged speeding away from pursuing Exeter police after they responded to the victim’s home after the altercation... “The lengthy text message exchange that preceded the events in question, shows a defendant who wanted to control the actions and manipulate the emotions of the alleged victim,” Honigberg wrote Tuesday. “It is clear that (Erickson) ran to his vehicle, which was parked away from the alleged victim’s home. Then drove well above the speed limit through a residential part of Exeter and south toward Massachusetts”... [Article here]

[Excerpts] Prosecutors in New Hampshire are fighting an appeal by a Massachusetts State Police sergeant accused of strangling his girlfriend who wants a judge to release him on bail while he awaits trial. A New Hampshire assistant county attorney filed a motion late last week opposing MSP Sgt. Bryan Erickson's bid for the judge to reconsider denying bail. "The Court agreed with the State that even supervised release would not be appropriate and that there are no conditions to otherwise mitigate the safety risks of allowing the Defendant to be released," N.H. Assistant County Attorney Ryan Ollis wrote in an objection to Erickson's motion... The Massachusetts State Police has suspended Erickson without pay. He earned $186,000 last year. The sergeant had been assigned to Troop A Northeast, which covers Andover to Revere. [Article here]

BRENTWOOD — A married Massachusetts State Police trooper accused of trying to strangle his girlfriend as she attempted to break up with him, then fleeing Exeter police at high speeds Sunday, was denied bail Tuesday. Trooper Sgt. Bryan Erickson, 38, of Groveland, Massachusetts, was arraigned in Rockingham Superior Court on felony domestic violence assault and misdemeanor charges of domestic violence assault, domestic violence obstructing the report of a crime, disobeying an officer, criminal trespass and reckless operation, stemming from an alleged incident occurring at his girlfriend’s Exeter home... Judge Martin Honigberg said he was troubled by the allegation Erickson fled Exeter police... “The allegation (Erickson) fled the scene traveling 80 miles-an-hour through the streets of Exeter, which is horrifically dangerous to the public and provides the kind of evidence that really goes way over the top,” Honigberg said. “On top of the domestic violence charges, that are very, very serious… Fleeing a scene at a high rate of speed is dangerous, it’s as clear and convincing evidence he would be dangerous if he were not held (in detention).” ... Jill Cook, assistance Rockingham County attorney, argued between Erickson’s training as a state trooper and as a former Marine, he also posed an enhanced risk of danger to the victim to inflict further physical harm... “Not only does (Erickson) have years of law enforcement training, but also with the Marines”... According to the affidavit, during the ensuing physical altercation, Erickson allegedly strangled the victim with one hand until she could not breathe, head-butted her and forcibly took her cell phone to prevent her from calling for help. He also allegedly prevented her from exiting a bedroom, according to the affidavit... If you need support Haven has trained confidential advocates available. The 24-hour hotline is (603) 994-SAFE (7233). Or to connect to our confidential, online chat service Monday to Friday, 9 a.m. to 4 p.m., please click the Chat Now button on the website at havennh.org [Article here]

EXCERPTS FROM SUPPORTING AFFIDAVIT FOR REQUEST TO ISSUE ARREST WARRANT

I, Officer Chase, being duly sworn, herewith make application for the issuance of an arrest warrant against the defendant:

I have information that a crime (or offense) has been committed by the defendant as follows:

A brief synopsis of [REDACTED]s statement is as follows:

- That Erickson is married to another woman.

- That she and Erickson have been in an intimate relationship for approximately one year.

- That Erickson had assaulted her.

- That she had minor scratches and bruises on various body parts.

- That she told Erickson that he could stop by her residence to talk and end their relationship.

- That Erickson grabbed her phone from her because she would not sit down.

- That she told Erickson to sit down to talk and he just grabbed her.

- That she told Erickson if he was done to just leave.

- That she tried to walk away and he got mad and aggressive.

- That Erickson grabbed her face and held her mouth.

- That Erickson then threw her down on the ground with a leg, wrapped her, and squeezed her face with one

barely breathe and could not move.

- That Erickson put his hand on her neck and one of his fingers down her throat.

- That she said she was going to call the cops if he didn't get his hands off of her.

- That she then sat on the floor and Erickson put his thigh in between her legs and held her down.

- That Erickson put his hand over her mouth because she was trying to scream.

- That Erickson head-butted her two times.

- That Erickson scratched inside of her cheek when he put his finger in her mouth.

- That she had no pants on at the time and Erickson grabbed her ass cheek and pulled it tight.

- That she said it hurts and Erickson said haha I don't care if it hurts you.

- That Erickson was definitely drunk because she could see it in his eyes.

- That she was fighting to get off the bed ..

- That she asked Erickson for her phone back and Erickson said no.

- That she tried to hide in the bathroom but he pushed the door open.

- That she tried to quickly grab the house phone and as she was dialing the last digit of911, Erickson hung up the

phone by pressing the end button.

- That she told Erickson she was going to call 911 if he didn't stop touching her.

- That she attempted to dial 911 three times in total.

- That on her third attempt at dialing 911 , she told Erickson she was going to call the cops.

- That she was able to get her cellphone back from Erickson by fighting with his hands.

- That she and Erickson have had sexual relations with each other.

- That when Erickson had his hand over her neck he was on top of her and she couldn't even breathe.

- That Erickson put his middle finger and thumb on the sides of her jaw.

- That she was crying and pretty much screaming.

- That her voice sounded regular but was kind of high because she was out of breath.

- That she attempted to leave the bedroom and he wouldn't let her leave.

- That Erickson said you're not leaving.

- That she told Erickson to leave a bunch of times.