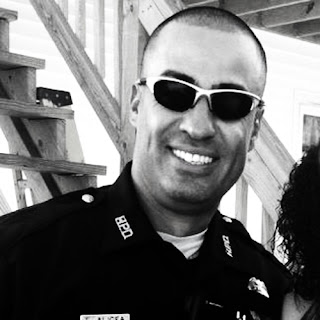 HOLYOKE POLICE OFFICER LOUMAG ALICEA ARRESTED FOR DOMESTIC ASSAULT AND BATTERY
The Republican
on September 28, 2012
[Excerpts] City police Officer Loumag Alicea is in a holding cell because his wife said he hit her face so hard it closed her right eye and held a gun to her head and said, "I feel like killing you now," according to court documents... Alicea, a 15-year veteran, was charged with assault and battery domestic and assault with a dangerous weapon, a handgun... [Full article here]

HOLYOKE OFFICER HELD FOLLOWING DANGEROUSNESS HEARING
WWLP
Oct 08, 2012
[Excerpts] A Holyoke police officer is being held without the right to bail after a dangerousness hearing for assault and battery charges brought by his wife. "He grabbed me by the hair, he held me on the floor bashing my face against it," said Loumag Alicea's wife. "Then he kicked me a bunch of times... I'm scared of him"...  [Full article here]
[police officer involved domestic violence oidv intimate partner violence ipv abuse law enforcement public safety noncooperation recant massachusetts state politics]
on 3/01/2013