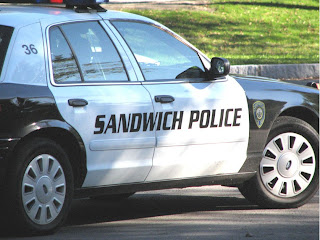 SUSPENDED COP’S WIFE TESTIFIES, "I'M IN FEAR EVERY DAY"
Cape Cod Times
March 11, 2013
[Excerpts] Fighting back tears during a hearing in Barnstable District Court, the estranged wife of Sandwich Police Officer Michael Hoadley said she is afraid of him. “I’m in fear every day”...  Barnstable District Judge W. James O’Neill extended a restraining order... The couple have been separated since October... At his arraignment, Hoadley was ordered to wear a GPS tracker, which remains in effect. Hoadley is on paid leave from the Sandwich department while an internal investigation is conducted... Although the woman told police that night that she had been choked and thrown to the ground by Hoadley in the past, she acknowledged during Monday’s hearing that she had never reported any abuse to police before... [Full article here]


SANDWICH POLICE OFFICER ACCUSED OF RAMMING RELATIVE'S CAR
FOX25 / MyFoxBoston
Posted: Feb 15, 2013
[Excerpts] ...[Sandwich Police Officer Michael Hoadley] faces charges of assault with intent to murder, assault and battery with a dangerous weapon (motor vehicle), domestic assault and battery, operating to endanger and leaving the scene of an accident with property damage. The 27-year veteran of the Sandwich Police Department allegedly caused his unidentified relative's car to go off the roadway and into the median... This isn't the first time Hoadley has faced department discipline. He served a three-month suspension for an off-duty incident in December 2010... [Full article here]

SANDWICH POLICE OFFICER FACES CRIMINAL CHARGES FOR DOMESTIC ASSAULT AND BATTERY
Cape News
Published: 02/22/13
[Excerpts] Patrolman Michael F. Hoadley, 46, has been placed on paid administrative leave pending an investigation... This is the third time since 2011 that the 27-year veteran of the Sandwich Police Department has faced disciplinary action.... During the interview process, the victim told police that there were other instances of abuse... Police Chief Peter N. Wack said as soon as he was made aware of the incident, he immediately contacted the state police to handle the investigation... According to court reports, he told the investigating officer that there had already been damage to both of the vehicles. He further stated that if there was new damage, the victim had set him up and hired someone to steal his Durango and crash it into the victim’s car and then return it to his residence, thereby making it appear he had crashed into it... Officer Hoadley was arraigned in district court last Friday but not before a psychologist evaluated him for competence. The psychological evaluation was made at the request of the prosecution due to the victim’s assertion that he had tried to take his own life two days before entering a drug and alcohol rehabilitation center last fall... Barnstable District Judge W. James O’Neill released Officer Hoadley but ordered him to wear a GPS tracker and to stay away from the alleged victim and the alleged victim’s children... [Michael Hoadley] was involved in a car crash at the Mobil Gas Station on Route 130 in December 2010, and that the incident was never entered into the police logs and no report of the accident was filed... he lied to another officer stating that his 21-year-old son had hit the pole... A second investigation was launched at the end of May 2011, after allegations were made that he had been sending harassing text messages to another officer... [Full article here]
[police officer involved domestic violence oidv intimate partner violence ipv abuse law enforcement public safety repeat hx lethal fatality fatalities massachusetts state politics]
on 3/18/2013