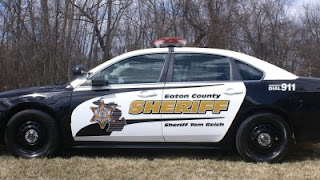 CHARLOTTE WOMAN PLEADS GUILTY TO LYING ABOUT BEING RAPED BY SHERIFF'S DEPUTY
Dec. 11, 2019
[Excerpts] A Charlotte woman pleaded guilty Wednesday to lying to police about being raped by a sheriff's deputy in 2017. Kellie Bartlett initially faced 16 charges related to her clerk job at the Eaton County Sheriff's Office and her report to Michigan State Police that a sheriff's deputy raped her...  A further investigation determined Bartlett was a "willing and consenting partner in this act"... They made that determination, in part, because of texts she exchanged with her husband the morning after... The texts were "sexual in nature and mocked the sexual encounter she had with the deputy"... Bartlett worked at the sheriff's office from 2008 through December 2017, when she was fired. She was in a relationship with the deputy from late 2015 through spring 2017... The identity theft charge is for faking a note from a physician in order to receive compensation for time off from the Eaton County Sheriff's Office... [Kellie's husband] Shane Bartlett, who at the time was the chief of police in Potterville, was charged with misconduct in office, lying to a police officer and false report of a felony. His charges are connected to his wife's charge of filing a false rape report. He is set for a preliminary hearing Jan. 2 to determine if there is enough evidence for him to stand trial. Nakfoor Pratt is also prosecuting that case. Kellie Bartlett will have a sentencing hearing Jan. 30. [Full article here]
[police officer involved domestic violence oidv intimate partner violence ipv abuse law enforcement public safety michigan rape state politics Five counts of using a computer to commit a crime Two counts of identity theft Three counts of unauthorized access to a computer Conspiracy to commit identity theft False report of a felony Two counts of stalking Intentional dissemination of sexually explicit visual material Aggravated stalking innocent cop]
on 12/13/2019