BURNED HERSELF TO A CRISP

Horrible Suicide of a Demented Woman While Her Husband Was Asleep in Another Room.
St. Louis Post-Dispatch, Missouri
18 Jan 1903, Sun, Page 39

Mrs. W. D. Boyd, wife of Police Officer Boyd of this city, was found dead in her husband's home, her body burned to a crisp. Indications point to a suicide in a most horrible manner.

An hour before the body was found Mrs. Boyd sent her little 10-year-old girl to the home of neighbors, telllng the servant who accompanied the child that if anything should happen to her (Mrs. Boyd) during the night to see that her child was given to her relative and properly reared. A light, as if the house was on fire, attracted the attention of neighbors to the Boyd home. Not a sound was heard to come from the burning woman. Cries failing to arouse the inmates, the house was entered and the lady's body was found sitting upright in a chair of the dining room, with every particle of clothing consumed by the fames and her body burned to a charred mass. In another room Officer Boyd, the husband, was found on a bed asleep. Not a sound had warned him of the awful fate of Mrs. Boyd.

Mrs. Boyd has been in ill-health for the past year, and at times was crazed with suffering. It is thought she ended her life in one of these fits of madness. 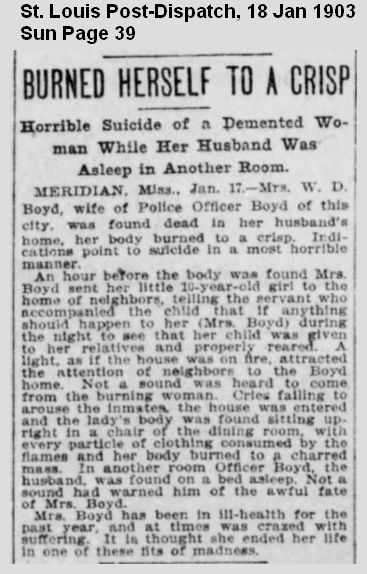