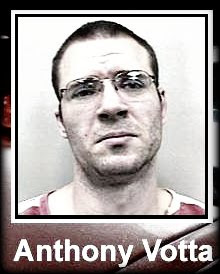 PREGNANT WOMAN BATTERED; DEPUTY ARRESTED
Anthony Votta To Be Placed On Unpaid Leave
wesh.com
August 9, 2009
[Excerpts] The Marion County Sheriff's Office said a corrections officer has been arrested in connection with the battery of his pregnant wife. According to a release from the sheriff's office, deputies responded to the Marion County corrections officer's residence at about 2:55 p.m. in response to a domestic battery report. Deputies said Anthony Votta told responding officers that he had battered his wife, who is four months pregnant... The sheriff's office said Votta has been charged with felony battery of a pregnant person and will be placed on unpaid leave pending an internal investigation. [Full article here]
[police officer involved domestic violence law enforcement florida children abuse]
on 8/10/2009