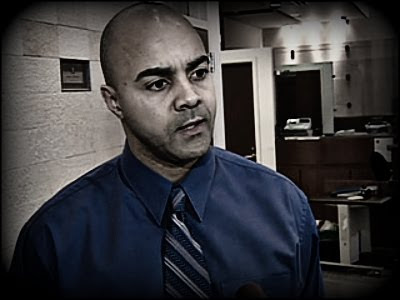 A jury acquitted a Seattle police officer Monday on charges he attacked his wife. Scott Moss was arrested in March after his wife told police he cut her hand with a knife...

Previous posts:
THIS IS THE FULL TEXT OF HOW THE TRIAL ENDED? HOPEFULLY THERE WILL BE SOMETHING MORE LATER IN THE MORNING.

Seattle Officer Acquitted Of Assault Charges
KIROtv.com
August 17, 2009
A jury acquitted a Seattle police officer Monday on charges he attacked his wife. Scott Moss was arrested in March after his wife told police he cut her hand with a knife. She said the fight started after she confronted him about an anonymous phone call she'd received-- claiming he was having an affair with the caller's friend. She did not require hospitalization, police said. Moss was found not guilty on three charges. [LINK]

THAT WAS IT. DID YOU BLINK? 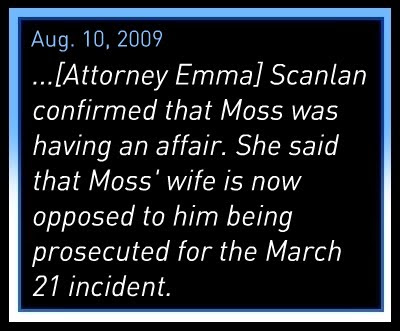 FROM LAST WEEk Trial opens for Seattle cop accused of assaulting wife
The Seattle Times
Jennifer Sullivan
August 10, 2009
[Excerpts] A Seattle jury heard opening statements this morning in the assault case involving Seattle police officer Scott Moss. Moss, a 15-year veteran of the department, is charged with second-degree assault stemming from an alleged domestic-violence incident at his Sammamish-area home in March. The officer's wife of 15 years told King County sheriff's deputies on March 21 that Moss had cut her with a knife and pushed her, Senior Deputy Prosecutor Adrienne McCoy said in her opening statement... After being confronted about the affair, Moss grabbed his wife by the wrists and pushed her toward the kitchen, according to court charging documents. He then took two knives from a butcher block and cut his wife's thumb, the documents say. Moss' wife ran out the back door to a neighbor's house, and police were called. The woman told deputies she feared he would get a handgun from his car, according to the documents... Emma Scanlan, one of Moss' defense attorneys, discussed the accuser's mental health during her opening statement. Scanlan said that Moss' wife had cut herself intentionally in the past. She said it is unclear how she received a small cut to her finger on the night of the alleged incident... Scanlan confirmed that Moss was having an affair. She said that Moss' wife is now opposed to him being prosecuted for the March 21 incident. [Full article here]

...Of course his wife "doesn't want to prosecute him now". The only thing I can imagine worse than crossing these clowns out in public is becoming intimately involved with one of them. There's probably nowhere to hide now from retaliation by him or his 'buddies' on the force, but run away, run away....
[police officer involved domestic violence law enforcement knife seattle washington politics]
on 8/18/2009