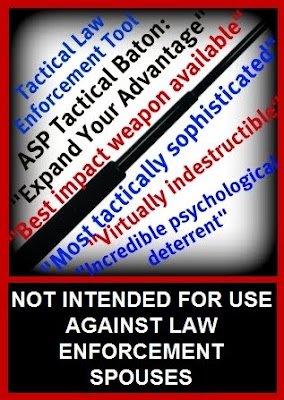 Interesting that the news does not reveal the accused Chief Deputy's first name [David], but gives the first name of the alleged victim.

TUCKER DEPUTY PLACED ON LEAVE
The Inter-Mountain
By Alec Rader
August 13, 2009
[Excerpts] Tucker County Sheriff's Department Chief Deputy D.E. Gidley has been placed on leave after being charged with misdemeanor assault and domestic battery charges... Gidley was released on a $600 personal recognizance bond. According to Sheriff Tom Felton, the charges were filed by West Virginia State Police following an incident that occurred on Aug. 4 while Gidley was on duty... The criminal complaint filed in the magistrate's office stated Gidley grabbed his estranged wife, Lynn Gidley, by the arm and chased her around her vehicle. He also was brandishing an "ASP baton" with which he hit the vehicle, according to Clay and the criminal complaint. Trooper 1st Class M.S. Wetzel and Sgt. K.L. Keplinger, who responded to the scene, observed marks on Lynn Gidley's left arm... "Dave appeared willingly and was very cooperative with the arresting officer and the magistrate and will be on leave until the disposition of the case," Felton said. "Chief Deputy Gidley, as with any defendant in a criminal case, is presumed to be innocent until proven guilty." [LINK]
[police officer involved domestic violence law enforcement west virginia tactical weapons abuse]
on 8/14/2009