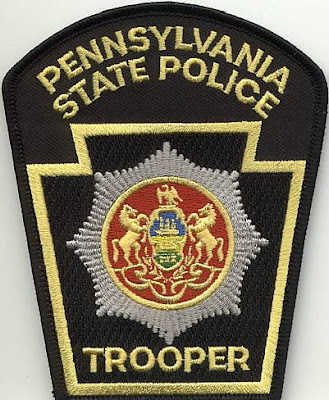 STATE TROOPER FACES CHARGES OF ASSAULT
The Centre Daily Times
Sara Ganim
Saturday, Aug. 01, 2009
A Rockview state trooper was charged Friday in Huntingdon County with assault, burglary, false imprisonment and other charges after a woman accused him of forcing his way into her house and assaulting her in a domestic incident. Timothy D. Lear, 31, has been suspended without pay following his arrest. The woman alleges Lear was a former boyfriend who, the evening of April 19, ripped and pushed through a screen door to her Huntingdon County home during an argument. He then accused her of having an affair, grabbed her arms to the point of bruising them and held her while she tried to get to a phone, court papers say. Police say the woman didn’t report this to Huntingdon state police until April 22, and said after she was able to escape from the house and get help, she went back inside to where Lear had fallen on the stairs and helped him clean and bandage a cut on his hand... District Judge Doug Gummo set his bail at $10,000 unsecured — meaning he won’t have to post any money unless he violates the terms set by the judge. A preliminary hearing has been scheduled for August 24 at 1:30 p.m. in Huntingdon County, and Muir said more details on Lear’s defense will probably come out then... [Full article here]
[police officer involved domestic violence law enforcement pennsylvania state police psp]
on 8/14/2009