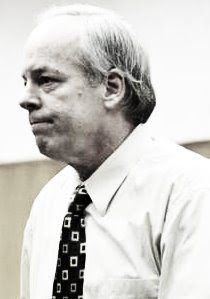 ..."Mr. Gundersen has already been found guilty of violating a court order... " [Judge Bruce] Watson said he would expect someone who left town with a sentencing date of Wednesday to appear back in town on Tuesday. Watson questioned whether Gundersen's failure to appear was due to arrogance and feelings of being above the law... Darcie Seal, the alleged victim in the recent case against Gundersen, was sitting beside Gundersen prior to the hearing. She left the courtroom immediately after Watson's ruling...

GUNDERSEN POSTS BAIL, RELEASED FROM CUSTODY
The Times-Standard
10/28/2008
Former Blue Lake Police Chief David Gundersen posted bail and was released from Humboldt County jail Friday, just hours after being remanded by a Humboldt County judge for failing to appear at a Wednesday court hearing. Gundersen, who was convicted last month of battery and weapons charges, was free after posting $50,000 bail but -- after Gundersen missed his sentencing hearing Wednesday -- Humboldt County Superior Court Judge Bruce Watson remanded him back into custody, ordering his bail increased to $200,000. The former police chief's sentencing hearing has been rescheduled to Nov. 21, although a defense motion for a retrial is expected to be heard before then. [Full article here]

GUNDERSEN A NO-SHOW AT HEARING
The Eureka Reporter, CA
Oct 22 2008, 3:53 PM
Former Blue Lake Police Chief David Gundersen didn’t show for a Wednesday court hearing and will have a $200,000 bench warrant issued if he doesn’t show for a Friday hearing... Gundersen’s attorney Russel Clanton said he was traveling by car from Newport Beach, Calif., where he was visiting his ailing mother... Gundersen, 54, was released from the Humboldt County jail Sept. 29 after Judge W. Bruce Watson reduced his bail from $1.25 million to $50,000. He’d been in jail since his Feb. 8 arrest. A jury acquitted Gundersen Sept. 24 of all 24 counts of spousal rape with an intoxicant and one count of attempting to dissuade a witness. The jury found him guilty of 11 counts of battery – a finding based on nude photographs Gundersen allegedly took of his wife Darcie Seal without her permission – illegally possessing a machine gun and silencer and violating a court order to not contact Seal. [Full article here]

GUNDERSEN BACK IN JAIL, SENTENCING PUSHED BACK TO NEXT MONTH
The Eureka Reporter, CA
Oct 24 2008
Former Blue Lake Police Chief David Gundersen is back in jail today, after a judge agreed with the prosecution that Gundersen had no credible reason for missing his sentencing on Wednesday... Humboldt County Superior Court Judge W. Bruce Watson set Gundersen's bail at $200,000 and scheduled his sentencing for Nov. 21. Darcie Seal, the alleged victim in the recent case against Gundersen, was sitting beside Gundersen prior to the hearing. She left the courtroom immediately after Watson's ruling... Humboldt County District Attorney Paul Gallegos argued that Gundersen's thought process doesn't matter and asked the court to remand him so the probation report can be completed. "Mr. Gundersen has already been found guilty of violating a court order," he said. "He assumed the court would continue the matter regardless of whether there was good cause. Watson said he would expect someone who left town with a sentencing date of Wednesday to appear back in town on Tuesday. Watson questioned whether Gundersen's failure to appear was due to arrogance and feelings of being above the law. [Full article here]

BLUE LAKE TRYING TO SHUT DOWN GUNDERSEN'S CITY E-MAIL
The Times-Standard
Donna Tam
10/25/2008
Blue Lake city staff have been trying -- with no luck so far -- to shut down an e-mail account started and apparently still used by their former Police Chief David Gundersen. Staff have been trying to cancel the account “bluelakepd@aol.com” for the last few weeks, since it was brought to their attention. The account was originally set up to function as the e-mail address for the entire department, and is paid for by the city. Originally started by Gundersen, he is the only one who has access to the account, and, according to more than one recipient, is still sending mail from that address. Mayor Pro Tem Marlene Smith said a resident told her about receiving an e-mail from the account, and a similar report was received by the Times-Standard... City Clerk Karen Nessler said the e-mail service provider, America Online, is refusing to shut down the account under Gundersen's name without the correct codes needed to cancel the account - codes that only Gundersen has... [Full article here]

'ARROGANCE': JUDGE SENDS GUNDERSEN BACK TO JAIL FOR MISSING HEARING
The Times-Standard
John Driscoll
10/25/2008
Humboldt County Superior Court Judge Bruce Watson sent David Gundersen back to jail Friday after the former Blue Lake Police chief skipped a Wednesday sentencing hearing... Watson on Friday expressed concern that Gundersen's absence on Wednesday suggests he might be a flight risk, and decided to remand him to jail and set bail at $200,000. ”I wonder if it is in fact arrogance, a contempt for the proceeding or an attitude that what applies to others does not apply to him -- if that's the case, Mr. Gundersen should be remanded,” Watson said. “Obviously, the laws apply to all equally.” Watson agreed to delay Gundersen's sentencing to Nov. 21. Gundersen turned to his wife Darcie Seal -- whose initial allegations of rape made to investigators led to his arrest Feb. 8 -- and frowned. He then immediately turned away and was led out of the courtroom by a bailiff. The jury in September found Gundersen not guilty on charges of raping his spouse with the use of an intoxicant and attempting to dissuade the victim of a crime, but convicted the former police chief on 11 misdemeanor counts of battery, violating a court order and illegally possessing a submachine gun and a pistol with a silencer. Gundersen's attorney, Russell Clanton, has said he intends to seek a new trial... Gallegos pointed out that a jury had convicted Gundersen of violating a court order, and that his failure to appear Wednesday is the second time he had disregarded the court's direction. Watson chose to take a hard line with Gundersen. ”Quite frankly, I haven't heard anything very persuasive regarding Mr. Gundersen's absence other than that he wasn't there, and that's disturbing,” Watson said. “To me, I have a hard time getting beyond the idea of arrogance." [Full article here]
on 10/28/2008