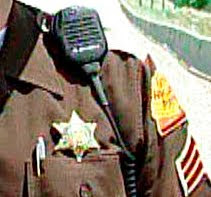 TROOPER COULD LOSE JOB OVER FAMILY FIGHT
UHP trooper suspended while incident winds through court.
Salt Lake Tribune
Nate Carlisle
Apr 22, 2010
A state trooper in Richfield is charged with misdemeanor assault and accused of punching his son. The trooper, Jeffery O. Kearney, currently is not allowed on duty and no decision has been made regarding his employment, said Utah Highway Patrol spokesman Cameron Roden. Police issued a citation to Kearney, 41, in January. Richfield Detective Trent Lloyd said officers received a report of a fight at Kearney's home. Lloyd said there was an argument between Kearney and his wife and the adult son tried to intervene. Lloyd said Kearney punched the son. "I know there was one good punch in the nose," Lloyd said. Kearney could not be reached for comment Wednesday. The citation is a class B misdemeanor, which is punishable by up to six months in jail. A clerk at the Sevier County justice court said no arraignment had been scheduled. Lloyd noted that Kearney likely will lose his job with the Highway Patrol. "His punishment far exceeds the crime, but that's the standard we're held to," Lloyd said. [LINK]
[police officer involved domestic violence oidv intimate partner violence (IPV) abuse law enforcement public safety utah state highway patrol]
on 4/25/2010