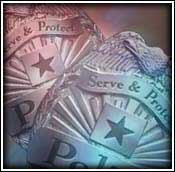 FORMER ALGONQUIN COP DENIES FLASHING INVALID BADGE
Chicago Press Release
February 10, 2010
A former Algonquin police sergeant who surrendered his badge last year after following a domestic violence conviction pleaded not guilty Wednesday to a charge he impersonated a police officer to get out of a speeding ticket. Wade Merritt, 46, asked for a jury trial on the Class 4 felony charge... Merritt resigned from the Algonquin Police Department in June, about one month after a judge convicted him of a domestic battery charge... He later was sentenced to nonreporting probation and a $150 fine. The 22-year police veteran is scheduled to return to court on the new case April 14. If found guilty of impersonating a police officer, he would face a sentence ranging from probation to three years in prison... [Full article here]

FELONY CHARGE DROPPED AGAINST FORMER ALGONQUIN POLICE SERGEANT
Patch.com
March 30, 2011
A charge for impersonating a police officer has been dropped for 46-year-old Wade Merritt... In 2009 Merritt resigned from the Algonquin police force about a month after he was covicted of domestic battery for hitting his wife. The charge was dropped yesterday in court after his attorneys argued that the indictment was not specific enough. [Full article here]

JUDGE DROPS FELONY CHARGE
Northwest Herald
By Sarah Sutschek
Mar. 30, 2011
WOODSTOCK – A case has been dropped against a former Algonquin police sergeant... Defense attorney Tom Loizzo said that the indictment merely mirrored statutory language saying Merritt “knowingly and falsely” represented that he was police officer. He said the indictment did not elaborate on how Merritt allegedly violated the law, whether it was flashing a fake badge, verbally indicating that he was a police officer, or another scenario. Phil Hiscock, chief of the criminal division for the McHenry County State’s Attorney’s Office, said he was unsure whether the charge would be refiled... Merritt resigned from the Algonquin Police Department in June 2009, about a month after he was convicted of domestic battery for hitting his wife. Merritt was sentenced to one year of conditional discharge for the battery conviction and also had to attend anger counseling. [Full article here]
[police officer involved domestic violence oidv intimate partner violence ipv abuse law enforcement public safety hx repeat illinois state politics]
on 3/31/2011