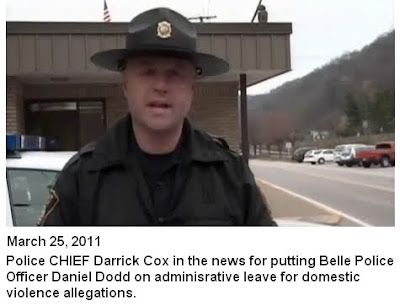 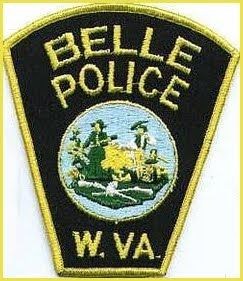 Yesterday I posted on Belle Police Officer Daniel Dodd who was arrested again for domestic violence. Dodd was put on administrative leave by the Belle police chief. It was brought to my attention that the police chief of Belle, Darrick Cox - before he was made chief - had his own reported domestic violence incident. As a Belle police officer Cox punched his girlfriend in the face, giving her a black eye and causing her face to swell.
What is the message to the victim?
(Is she alive, and would we know if she wasn't?)
What does "law enforcement" MEAN in Belle, West Virginia?
This is nothing new.
Only another example.
A very small percentage of officer-involved domestic violence ever gets as far as being in the news. I can only imagine what some of these victims around the country suffer before their story hits the news. Even made public, for most, no accountabilty or protection follows. Every department needs to adopt a procedure and policy for OIDV cases. Every department needs to treat domestic violence as a CRIME.

BELLE POLICE OFFICER ON LEAVE AFTER BATTERY CHARGE
Charleston Daily Mail, WV
March 29, 2007
[Excerpts] Belle Police Department has placed an officer on administrative leave after he was charged with domestic battery. Darrick Cox, 37, of South Charleston, allegedly struck a woman in the face early on Tuesday, causing her face to swell and giving her a black eye... The woman told officers that Cox was an intimate partner of hers... Belle Police Chief Robert Sizemore would not comment on the incident, but said that Cox is a "good kid" and a "good officer"... Belle Mayor Larry Conley said the Belle police will examine the incident, and Cox will remain on leave until the investigation is complete. "The chief will investigate it and report back to me," Conley said... [Full article archived here]
BELLE CHIEF OF POLICE?
Chief of Police Belle WV Darrick Cox
BELLE,KANAWHA COUNTY, WV POLICE
thelonerangerridesagain blog
MAY 16, 2008
I was wondering if anyone new who was out protecting them in the Town of Belle. I do, take a look at this in March of last year now Chief of Police Darrick Cox was charged with Domestic Battery after an incident with his girlfriend. Mayor Conley stated that the Chief of Police, at that time John Sizemore, would investigate and report back. Chief Sizemore was never given the order by Mayor Conley to investigate. Eventually the charges were dropped... [MUCH more here]
[police officer involved domestic violence oidv intimate partner violence ipv abuse law enforcement public safety brotherhood brass favors corruption west virginia state politics]
on 3/26/2011