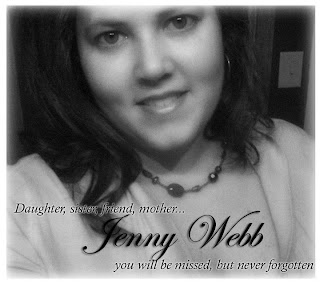 Jennifer Marie Webb and unborn Braxton James Donald Webb were stolen from life and from the people who love them on August 30, 2011.
[UPDATE: Buena Vista Police Officer Kenneth Blue has been arrested and charged with premeditated murder in the death of Jenny, Intentional Conduct against a Pregnant Individual Resulting in Death and Miscarriage or Stillbirth to a Fetus or Embryo, and Felony Firearm Possession During the Commission of a Felony. Links to newer articles are in the comment section below, with excerpts.]
...Friends of 32-year-old Jennifer Webb say she confided in them about her relationship with a married Buena Vista Township Police Officer [Kenneth "Ken" Bluew]. It is the same officer who found her body... Tuesday night, Webb's body was discovered near the police department's gun range that is frequented by officers... 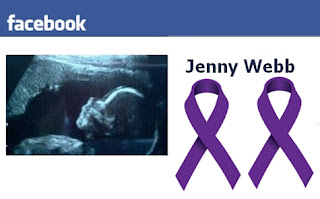 ...Jenny was due to give birth in just a few weeks and had already named her unborn son, Braxton James Donald Webb... Buena Vista Township police officers were first on the scene, reporting a possible suicide, but the investigation was immediately turned over to the Michigan State Police... While authorities are releasing little information at this time, [TV5 reporter Liz] Gelardi reported the incident may have involved two people...
FACEBOOK: JUSTICE FOR JENNY
WOMAN'S BODY FOUND AT GUN RANGE: Saginaw Co. prosecutor confirms woman was pregnant
by NBC25 Newsroom
Posted: 08.31.2011
[Excerpts] A Saginaw County woman, who was due to give birth in just a few weeks, was found dead at a police gun range in Buena Vista Township early Wednesday morning. Jenny Webb had already named her unborn son, Braxton James Donald Webb... [Saginaw County Prosecutor Mike] Thomas is not releasing any details except to say the woman was late in pregnancy. In the meantime, NBC25 is learning more about Jenny Webb through her online activity. Before her Facebook page was closed to the public it showed she had more than 300 friends and was expecting the birth of her first child Sept. 23rd... Those very close to the Jenny Webb investigation say they're disgusted and disappointed about what happened but won't get into specifics right now... She most recently worked at P.F. Markey Incorporated and graduated from Bridgeport High in 1997. A cheerleader and life-long resident of the area, Webb had several siblings and spent time at the Candlelite Bowling and Banquet Center in Bridgeport Township. The owner says he can still see Jenny's smiling face... [Full article here] 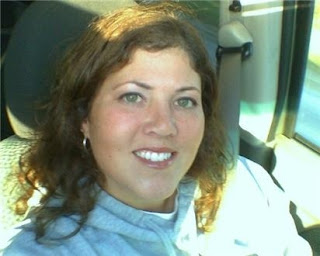 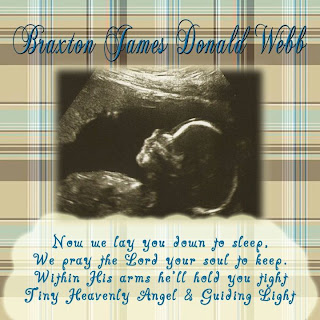 FUNERAL SET FOR PREGNANT BRIDGEPORT WOMAN FOUND DEAD IN BUENA VISTA
mlive.com
Published: Friday, September 02, 2011
[Excerpts] Funeral arrangements are set for Jennifer M. Webb, the 32-year-old pregnant woman found dead under "suspicious" circumstances in Buena Vista Township on Wednesday. Family and friends can attend Webb’s funeral at 4 p.m. Saturday at W.L. Case and Co., Funeral Chapel, 4480 Mackinaw in Saginaw Township. An obituary for the Bridgeport Township woman describes her as "the type of person who, once you met her, you felt like you knew her all your life"... [Full article here] 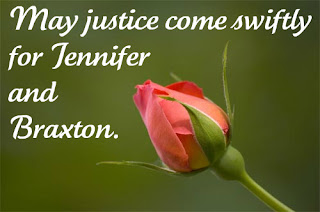 CANDLELIGHT VIGIL HELD FOR SAGINAW COUNTY WOMAN AND UNBORN CHILD
WJRT
By Kristen Abraham
Posted: Sep 02, 2011
Friends and family of Jennifer Webb honor her memory Friday with a candlelight vigil. The 32- year-old Saginaw County woman was found dead earlier this week near a Buena Vista Township gun range. Investigators won't release the cause of death but do say it wasn't from natural causes. Webb was eight months pregnant and the baby did not survive. Friends of Webb tell ABC12, she had been in a relationship with married Buena Vista Police officer Ken Bluew. We've learned it is the same officer who found her body early Wednesday morning. Family and friends wanted Friday's vigil for Webb to be a celebration of her life, not how the 32-year-old woman died. Jill Lewis was a former co-worker of Webb's, she said everyone was blessed to have known Jenny. "She was a wonderful person and went out of her way for people." Gene and Jaquelyn Noack are Michigan State Spartan fans but they wore maize and blue for Jenny, who's favorite team was the University of Michigan. "She was like a daughter to me because she was best friends with my daughter, she will be sadly missed," said Gene Noack. "When you talk to Jenny, she always knew how to make you feel better, even if it was the worse day of your life, Jenny could make you happy. We are very broken hearted, but we can't be for her. We have to keep a smile on our face," added Jaquelyn Noack. Webb will be remembered for her smile, her kindness and her love of life, especially the new life she was supposed to bring into the world. Jamie Sedlar graduated with Jenny, she said her high school friend will never be forgotten. "Jenny had a beautiful smile, that's how we need everyone to remember her." The funeral service for Jennifer Webb is Saturday September 3rd. [LINK]
PROSECUTOR LABELS PREGNANT WOMAN'S DEATH A HOMICIDE
WNEM
By Brandon Allendorfer, Tom Plahutnik, Liz Gelardi
Updated: Sep 02, 2011
[Excerpts] TV5 spoke with Saginaw County Prosecutor Mike Thomas who said he's treating the death of Jenny Webb as a homicide. Thomas said Friday that police are interviewing more witnesses and authorities are waiting for certain pieces of evidence to be processed before saying anything more... "A lot of the time, with other homicide investigations, we do know more information about the cause of death, about potential suspects," asked TV5 reporter Liz Gelardi. "Why in this case do we not know?" Thomas responded, "Well, because we aren't [to] the point in this investigation where we have anybody charged with anything, so we can't sit there and talk about supposition, possibilities or rumors"... The body was discovered near a private gun range that is frequented by law enforcement officers on Outer Drive... While authorities are releasing little information at this time, Gelardi reported the incident may have involved two people... Buena Vista Township Police Chief Brian Booker says the case has been turned over to Prosecutor Thomas. "I thought it best that [the Michigan State Police] investigate this situation," said Booker. "The prosecutor has been informed; he's been at the scene. Everything else has to come from the prosecutor's office." In many cases, state police troopers are call in to investigate when a law enforcement officer is involved... [Full article here]
COMMENT:
"All of us who were friends and family are still trying to cope with this loss. We all believe the father of that child was at fault. However, we should all understand that it is still wrong to make assumptions. I don't believe for a minute that there is any sort of cover up pending. The case was handed over to the state because it involved a police officer. Everyone is tight lipped because it involved a police officer. Although it is difficult, we all have to be patient and allow the authorities to do the work uncovering the facts. We must remember that there is a proceedure for the handling of this case and it must be followed. One mistake by the prosecution or investigators and the defendant will be set free. We all want the same thing... We want the truth. Justice, no matter what it is, will not help us with this loss." 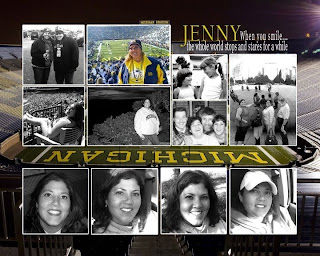 FAMILY SPEAKS OUT ON PREGNANT WOMAN'S DEATH
WNEM
By Liz Gelardi, Tom Plahutnik
Updated: Sep 03, 2011 5:18 AM PST
[Excerpts] Family and friends are remembering Jenny Webb, the pregnant woman whose body was found outside a police gun range in Buena Vista Township. Visitation was underway most of Friday at a Saginaw Township funeral home. But there are still a lot of unanswered questions surrounding her death, answers that police aren't giving up... "It's just not the same, it's just not my sister who was always the one that was there and the one that I could talk to and cry to and just sit with, it's just, it's going to be hard," said Angie Webb, Jennifer's sister... Angie Webb tells TV5 her sister was a ray of sunshine, her best friend, and she can't begin to make sense of her sudden death... Police found Jennifer Webb's body early Wednesday morning in Buena Vista Township... Jennifer was at least eight months pregnant, due to give birth to a baby boy she named Braxton in September... "We really, honestly, don't know what happened," said Angie. "We have our ideas of what happened, but we want the MSP and the prosecutor to be able to do their jobs"... Family and friends say they'll wait for the truth to come out. In the meantime, they're remembering a woman who touched their lives and the baby they never had a chance to meet. "It's just so unfair, two wonderful people were taken from us and it's just so unfair," said Angie. A candle light vigil was held Friday night at the Bridgeport Pavilion... [Full article here]
Obituary for
JENNIFER MARIE WEBB
W. L. Case and Company Funeral Homes
[Excerpts] Bridgeport, Michigan - Passed away unexpectedly Tuesday, August 30, 2011, age 32 years. Jennifer was born in Saginaw, Michigan April 12, 1979 the daughter of Donald and Dawn (Loth) Webb. She graduated from Bridgeport High School in 1997 and had attended Delta College and Saginaw Valley State University. She had been employed at Andersen Logistics and was currently working for P. F. Markey. Jennifer was an avid Michigan football fan. She enjoyed hunting and camping. Jennifer was the type of person who, once you met her, you felt like you knew her all your life. She thoroughly enjoyed being with people. Jennifer's unborn son, Braxton James Donald Webb, is now with her in Heaven. Jennifer is survived by her parents... her grandmother... a brother... a sister... nieces and nephew... Memorial contributions may be made to a charity of the donor’s choice. [LINK]
BLUEW MISCELLANEOUS: 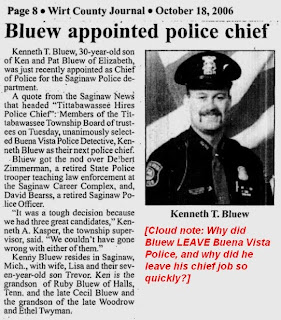 Ken Bluew, a Buena Vista Township Police officer who left the department to be chief over at another department and came back 15 months later. Officer Bluew's a firearms instructor and member of the Blue Knights, a law enforcement officer's motorcycle group - and a married man. Prayers go out to his family, as well as to Jennifer's.
Detroit's 17th Precinct
Detroit Police Officers...
Present, Former, Retired, and Family members
Kenneth R Bluew ... (Passed away Dec. 19, 2006).
Retired. Heaven
Info: Detroit Police Officers E-Mail Directory
08/04/2011
Family members of DPD Officers
Ken Bluew Jr. tangofam@chartermi.net - Police officer and firearms instructor for the Buena Vista Twp. Police (Saginaw, MI.) My father retired as a Sgt. from #6 in 1997. 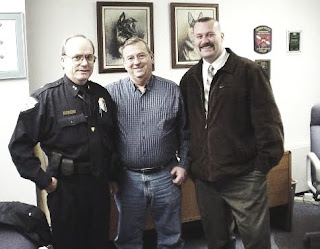 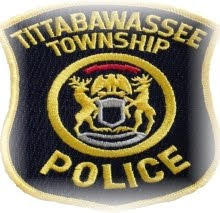 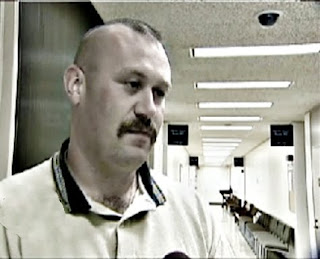